Through a research collaboration between Institute of Biology at University of Southern Denmark (SDU), Naturama and Statens Serum Institut, scientists have discovered, that Danish hedgehogs carry mecC-MRSA in their snouts. 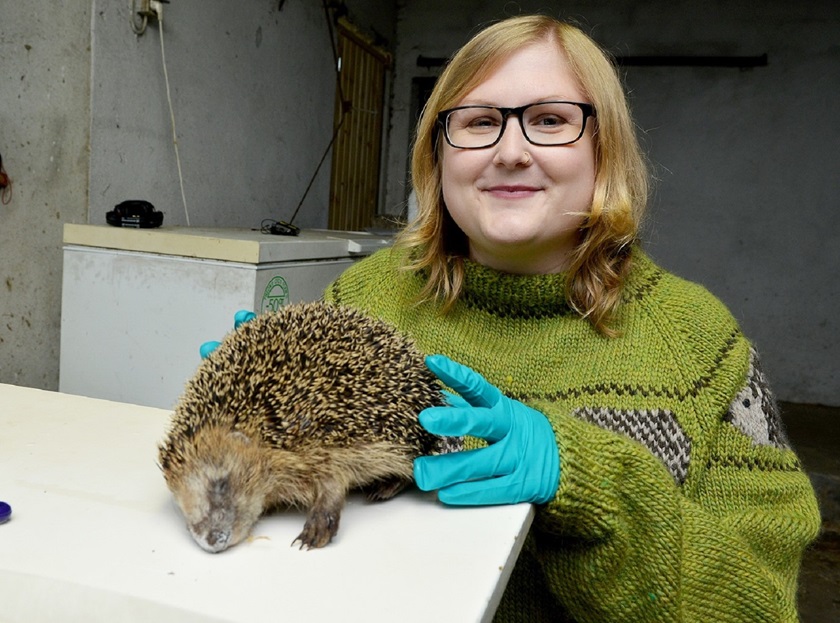 Most people consider the hedgehog a welcome guest in the garden. But a newly published study reveals that the Danish hedgehogs carry a secret.

The results have been published in PLOS ONE.

The research was part of a PhD project called ”The Danish Hedgehog Project” intending to describe the state of the Danish hedgehog population. The project was based on citizen science, and former PhD student, Dr Sophie Lund Rasmussen, asked the Danish citizens to collect dead hedgehogs for her research in order to use the dead to understand the living. During 2016, volunteers collected an astonishing 697 dead hedgehogs originating from all over Denmark.

Nasal swabs were obtained from 188 dead hedgehogs to determine the occurrence of MRSA. Additionally, 16 hedgehog rehabilitators were tested for potential zoonotic transmission of MRSA from hedgehogs to humans.

The results were surprising: close to twothirds (61%) of the hedgehogs carried the so-called mecC-MRSA. None of the hedgehog rehabilitators tested positive.

"Only 1-2% of all the MRSA incidences found in human patients in Denmark are caused by mecC-MRSA. The transfer of infection to humans is likely induced by pets and production animals, which have been known to carry mecC-MRSA occasionally. mecC-MRSA is easily treated with alternative types of antibiotics and predominantly causes superficial skin infections like other types of Staphylococcus aureus," says Head of the National Reference Laboratory for Antimicrobial Resistance at Statens Serum Institut, Anders Rhod Larsen. "The detection of mecC-MRSA in hedgehogs should therefore not change our positive attitude towards hedgehogs visiting our gardens," he continues.

They have carried mecC-MRSA for decades

mecC-MRSA have previously been detected in Swedish hedgehogs, but also in a range of other species of wildlife and production animals. It is, however, striking that the prevalence of mecC-MRSA in hedgehogs is remarkably higher compared to other animal species.

"This study is particularly interesting because a high sample size of hedgehogs with a geographical representation of a whole country, have been tested. Such a comprehensive study of MRSA in one particular species of wildlife, has never been produced before. Hedgehogs, and other species of wildlife, have likely carried mecC-MRSA for decades. But it is not until recently that scientists have begun to discover the extent of this colonization. This basically means that there is no reason to fear the spread of MRSA if your garden is visited by hedgehogs. Just as long as you make sure to wash your hands, as always, if you come into physical contact with a hedgehog or another species of wildlife," says Dr Sophie Lund Rasmussen.

It remains to be seen whether the same prevalence of mecC-MRSA can be found in British hedgehogs, but a study by Professor Mark Holmes and colleagues from Cambridge University is underway.

Antimicrobial resistance can evolve naturally in the wild

The research also shows that antimicrobial resistance is evolving in the wild independently of our consumption of antibiotics.

"Antibiotics are defence compounds produced by bacteria and fungi for the purpose of protecting themselves against other bacteria. It is likely an interaction between a certain ringworm species and the Staphylococci that has caused the hedgehogs to become natural reservoirs of MRSA," says Dr Anders Rhod Larsen.