Below, we describe the main findings for 2021.

The consumption of antimicrobials for young children increased by 16% from 2020 to 2021. During the first pandemic year, the consumption for this age group declined by 38% (2020 compared with 2019). 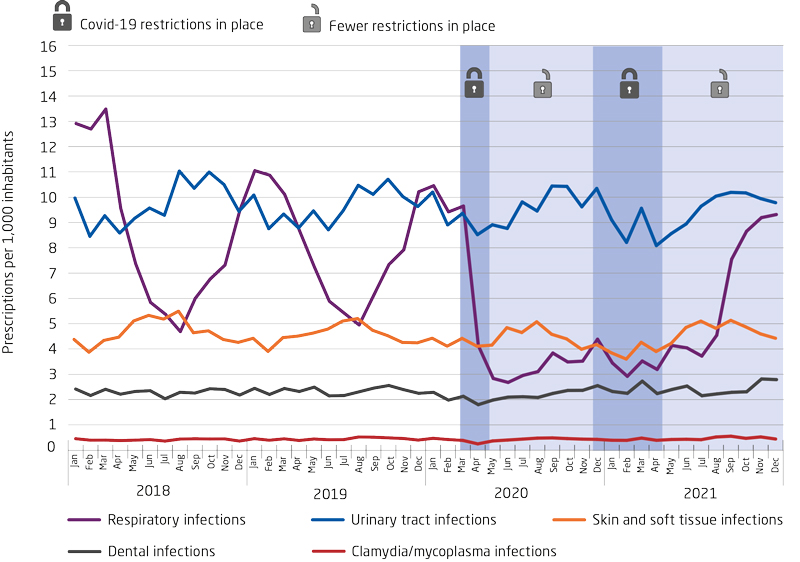 Figure 2. The antimicrobial consumption for elderly nursing home residents and elderly people living in their own home, prescriptions per 1,000 inhabitants, Denmark, 2020

Since 2012, the consumption of antimicrobials at hospitals has increased by 25% when changes in hospital activity in the course of the period are taken into account. The consumption of broad-spectrum antimicrobials at hospitals continues to follow an increasing trend. This applies, in particular, to the combination of penicillins and beta-lactamase inhibitors, which has increased by 118% in the past ten years. Consumption peaked during the second wave of the pandemic (the winter 2020-2021) when large changes were observed in hospital activity and patient composition. 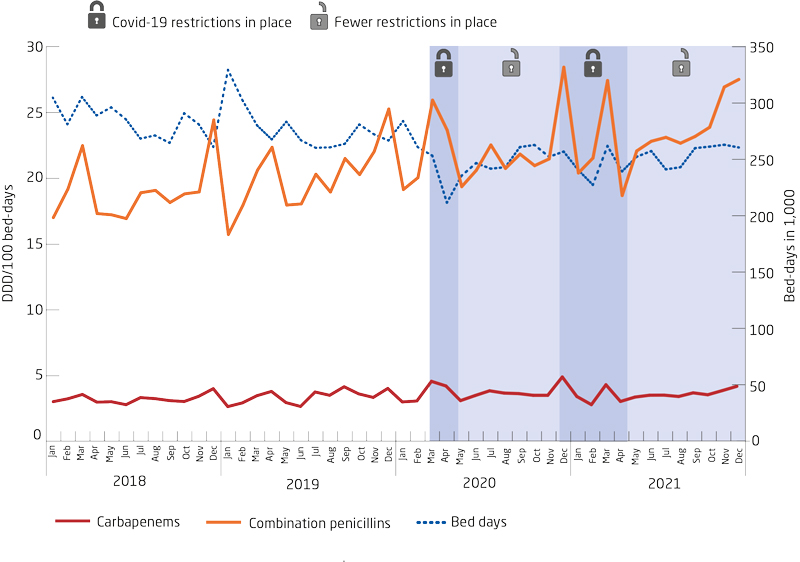 Resistance in invasive Escherichia coli continues to decline for most of the tested antimicrobials, except for piperacillin-tazobactam. The number of invasive infections with E. coli continues to rise, which may be due to an increasing number of risk-group patients (elderly, immunosuppressed and comorbid patients, among others) and an increase in the number of invasive and advanced procedures performed. Similar trends are being observed for E. coli isolated from urine in primary and secondary healthcare alike. The number of ESBL- and/or AmpC-positive E. coli infections decreased by 28% from 2020 to 2021. Monitoring of these E. coli is important as ESBL- and/or AmpC-positive bacteria are resistant to most betalactam antimicrobials.

Streptococcus pneumoniae stands out in a positive manner as the number of invasive infections with this bacterium has declined by 62% since 2012. This may probably be explained by the introduction of the pneumococcal vaccine into the childhood vaccination programme in 2007, the offer of free pneumococcal vaccination for elderly people aged more than 65 years as from April 2020 and the national COVID-19 restrictions imposed during the pandemic.

The occurrence of infections with carbapenemase-producing organisms (CPO) still follows an increasing trend. The number of outbreak- as well as travel-associated cases increased in 2021. In 2020, a total of 238 CPO cases were detected, whereas the corresponding number for 2021 was 277. The year 2021 recorded 77 outbreak-related and 45 travel-associated cases. In Danish healthcare, 2021 saw a total of 15 current outbreaks recorded in the outbreak database, KURS. It is worrying that the increase is primarily caused by spreading of the infection at hospitals. It therefore remains important to focus on the general and supplementary infectious hygiene precautions in daily work.

After three years with stable resistance, an increase was observed in the occurrence of invasive vancomycin-resistant enterococci. The occurrence of resistance to vancomycin in Enterococcus faecium increased from 9.4% in 2020 to 10.2% in 2021. This development also causes concern and an increased focus is warranted on infection hygiene to impede spreading of the infection. Linezolid-resistant enterococci remain rare but are monitored closely.

Monitoring of MRSA (infections and healthy carriers) showed a 6% decrease in 2021 compared with 2020 and a 26% decline since 2019. This is probably owed to a reduction in travel activity, social contact and access to hospitals in 2020 and 2021 due to COVID-19 restrictions. In 2021, a total of 30 MRSA outbreaks were recorded at Danish hospitals and nursing homes. Neonatal departments recorded five outbreaks involving a total of 42 persons, and nursing homes were affected by ten outbreaks involving a total of 21 residents. The number of outbreaks was on a par with that recorded in 2020 (31 outbreaks). However, fewer patients were affected in 2021 (109 in 2021 compared with 130 in 2020).

Resistance in zoonotic bacteria, i.e., bacteria that transmit (directly or indirectly) between animals to humans

As in the previous years, 2021 recorded a high level of resistance in Campylobacter jejuni (C. jejuni) to fluoroquinolones and tetracyclines with resistance levels of 52% for ciprofloxacin and 30% for tetracycline. The occurrence of macrolide (erythromycin)-resistant C. jejuni remains low, and resistance was observed in less than 1% of patients in 2021. C. jejuni is also monitored annually in slaughter pigs and pork, and as was the case in the preceding years, 2021 recorded a higher level of resistance in isolates from these animals than in isolates from patients. Compared with 2020, the percentage of fully sensitive C. jejuni from both slaughter chickens (8%) and cattle (5%) increased. Monitoring of carbapenem resistance in Campylobacter was initiated in 2021. The monitoring revealed resistance to ertapenem in 5% of C. jejuni isolates from patients and in a single Campylobacter coli isolate from slaughter pigs.

With respect to Salmonella, the DANMAP monitoring efforts are focused specifically on S. Typhimurium. For this serotype, many of the human infections are caused by a closely related clone that is resistant to ampicillin, sulfonamide and tetracycline. Among Salmonella, resistance to critical antimicrobials, i.e., 3rd-generation cephalosporins, carbapenems, gentamicin and colistin, is only rarely observed (< 1% for cephalosporin and no carbapenem-resistance in S. Typhimurium in 2021). Resistance to fluoroquinolones (ciprofloxacin) was observed in 7% of isolates from infections acquired in Denmark. This is the highest level observed in the past ten years. Less than 1% of S. Typhimurium isolates were resistant to azithromycin. S. Typhimurium is also monitored annually in slaughter pigs and pork, and as was the case in the preceding years, 2021 recorded a higher level of resistance in isolates from these animals than in isolates from patients. No resistance to fluoroquinolones (ciprofloxacin), carbapenems or third-generation cephalosporins was recorded in S. Typhimurium from slaughter pigs or pork in 2021. However, an increase was observed in azithromycin resistant isolates from slaughter pigs. This increase currently remains unexplained, but it will be monitored closely in the year to come.