Update on the monkeypox (hMPX) outbreak in Europe

Update on the monkeypox (hMPX) outbreak in Europe


Europe is still experiencing a large outbreak of monkeypox. According to the WHO-ECDC, on 22 June 2022 a total of 2,746 confirmed cases had been detected in 29 European countries, mainly among men who have sex with men (MSM). According to other sources, the total number of confirmed cases worldwide exceeds 3,000 cases. To this day, Denmark has recorded a total of 13 cases. The source of infection is known for all of these cases.

Monkeypox is caused by a rare virus found in some African animals, which can also be transmitted to humans. Monkeypox virus is related to human poxvirus, which was eradicated globally in 1980, and which was transmitted between humans exclusively and was not found in animals. Various African countries record monkeypox cases continually, but European outbreaks are rare. Monkeypox is less infectious than humanpox and it runs a less severe course. Monkeypox typically presents as fever, myalgia, headache and swollen lymph nodes, followed by a rash with blisters (vesicles). Read more in the Disease Encyclopaedia (Sygdomsleksikon).

On 7 May 2022, Great Britain notified the WHO of a confirmed case in a person who had travelled from Great Britain to Nigeria and had subsequently returned to Great Britain. In Nigeria, the condition is widespread (endemic), and monkeypox was suspected. Therefore, the person was immediately admitted to hospital and isolated, and reverse time-polymerase chain reaction (RT-PCR) confirmed that the man had monkeypox (West African type).

On 13 May 2022, Great Britain notified the WHO of a total of two laboratory-confirmed cases (RT-PCR on vesicular swabs) and one likely case of monkeypox (West African type). All three cases originated from a single household.

On 15 May, the WHO was notified of an additional four laboratory-confirmed cases in England, all among MSM who had been seen at clinics for sexually transmitted diseases. None of these had known contact to travellers from West Africa, but shared sexual contacts were found among two of the four men. Link.

The European Centre for Disease Prevention and Control (ECDC) continuously publishes risk assessments. Globally, one death has been reported, in Nigeria, where the condition is endemic.

Generally, the disease courses have been described as mild.

The situation in Denmark

On 23 May 2022, the first case of monkeypox was detected in Denmark. A total of 13 cases have now been detected in Denmark - all in men who had either travelled to Germany, Spain, Belgium or Portugal, or who had come into contact with one or more persons who were suspected of having monkeypox or in whom the condition had been confirmed.

To avoid stigmatisation, the use of geographical names in the description of monkeypox variants has been changed and, as from the current 2022 outbreak, sequences have been named as subgroups (lineages) based on their genetics. The new nomenclature describes hMPX outbreaks, where A.1 characterises the 2018 outbreak with the West African variant, and further branching to A.1.1, which comprises a single US case in 2021 and the new 2022 outbreak. The current outbreak was coined B.1, as the sequences form a shared cluster based on their genetics. The Danish sequenced cases belong to lineage B.1. as do all other internationally characterised sequences from the 2022 outbreak, Figure 1. Based on phylogeny, the current Danish cases may be considered to originate from the outbreak currently evolving internationally. Thereby, it does not deviate from the international sequences. The placement in the phylogeny three of the US sequences from November 2021 may possibly indicate that monkeypox has been in circulation for a longer period than previously assumed. 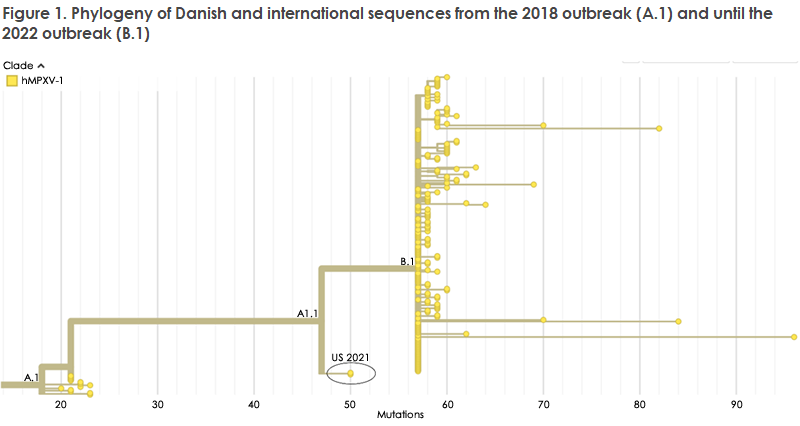 Guidelines on the handling of monkeypox in Denmark

Any confirmed case of monkeypox must be notified immediately by the treating department/physician. Notification is by phone to the Danish Patient Safety Authority (DPSA). Subsequently, the case must be notified in writing (preferably via the Danish Health Data Authority's Electronic Notification System (SEI2)) to Statens Serum Institut (SSI), Department of Infectious Disease Epidemiology and Prevention. Notifications made electronically via the SEI2 are submitted to the SSI and a copy is automatically sent to the DPSA.

The DPSA is responsible for ensuring contact tracing of close contacts to persons with confirmed monkeypox infection. The DPSA contacts the Department of Infectious Medicine at Hvidovre Hospital or Aarhus University Hospital, Skejby, who then assesses if post-exposure prophylaxis (PEP) should be offered in the form of vaccination of close contacts.

The Danish Health Authority has published a guideline describing the handling of monkeypox in Denmark. The guideline includes a thorough description of the condition, including notification procedure, case definition and hygiene precautions, contact tracing and treatment. The guideline is updated continuously.

The SSI maintains its assessment that the risk is low that monkeypox will spread in the general population in Denmark. Even so, the risk remains high of spreading among persons with various sexual partners, including men who have sex with men in Denmark or abroad.

The attempt to contain the monkeypox outbreak internationally is being challenged by the fact that the outbreak spreads globally and by indications that infection may have gone unnoticed for several months before the current outbreak was detected. Therefore, an increasing number of introductions of infection into Denmark may be expected along with spreading in Denmark among risk groups.

This may, however, be minimised through contact tracing, vaccination, etc.