As previously reported in EPI-NEWS 27/21 and 35/21, Denmark has witnessed an extraordinary high incidence of RS virus since June. In recent weeks in particular, the infection numbers have increased endemically to a level that is 3-4 fold higher than the normal level for the RS season, Figure 1. Unusually high RS virus infection numbers have also been recorded in other countries, among others in Norway, Australia and New Zealand. 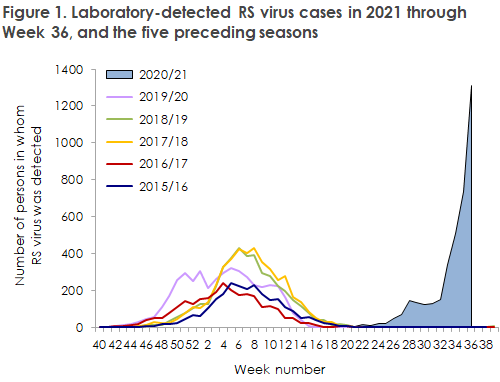 Persons of all ages can become affected by RS virus. The youngest children in particular may develop serious disease that requires supportive treatment, including respiratory support. In contrast, older children and adults typically only experience mild airway symptoms.

A new vaccine against shingles (herpes zoster) will become available in Denmark as from 1 October 2021. The EU marketing authorisation of the Shingrix vaccine was approved as early as 2018, but it has not been possible to order the vaccine until now.

The vaccine is approved for adults aged 50 years or more for protection against herpes zoster and prolonged neuralgia following herpes zoster (postherpetic neuralgia). Furthermore, the vaccine may be used in adults as from 18 years of age who have an increased risk of herpes zoster due to a compromised immune system.

The primary vaccination programme consists of two doses administered at a recommended minimum interval of two months. The recommendation is that both doses are given within six months, but even if this time limit is exceeded, the vaccination course is not re-initiated. In persons who are or may be expected to become immunocompromised and who may therefore benefit from rapidly achieving protection against herpes zoster, the second dose may be administered as early as one month after the first dose.
The vaccine is administered intramuscularly.

The need for booster vaccination once the primary vaccination programme has been completed has not yet been established.

Shingrix may be given to persons who have previously been vaccinated with a live attenuated chickenpox vaccine. Shingrix is not indicated for prevention of primary varicella infection (chickenpox).

Phase III trials have demonstrated that Shingrix may be administered concurrently with inactivated influenza vaccines, Pneumovax (PPV 23) and diphtheria-tetanus (diTe) booster/diptheria-tetanus-pertussis (diTeki)-booster, without affecting the immune response. At the website of Statens Serum Institut, you will find more information about the recommended intervals between vaccinations containing live and inactivated vaccines.

The protection against shingles following vaccination with Shingrix was studied in two phase III trials. In one of the trials, Shingrix vaccination reduced the incidence of herpes zoster and postherpetic neuralgia considerably in patients aged 50 years or more. During the trial, 7,695 persons were given Shingrix and 7,710 were given a placebo. After a mean three-year follow-up period, six adults in the Shingrix group had been affected by herpes zoster, whereas this was the case for 210 adults in the placebo group. After four years of follow up, no one in the Shingrix group had acquired postherpetic neuralgia, whereas a total of 18 cases had been recorded in the placebo group. Thus, a 97% vaccine efficacy was recorded for protection against shingles and 100% protection against postherpetic neuralgia in adults aged more than 50 years.

The other trial specifically studied the effect in adults aged more than 70 years. In combination with the results for +70-year-old participants in the first-mentioned trial, Shingrix demonstrated a vaccine efficacy of 91% against herpes zoster and 89% against postherpetic neuralgia in the group of +70-year-old patients.

The two trials mentioned above did not include patients who had previously been affected by herpes zoster.

The safety of Shingrix was evaluated on the basis of clinical trials including more than 15,000 adults. Side effects reported after the marketing authorisation was given are also included in the safety profile.

The most frequently reported side effects for adults aged more than 50 years and for adults aged more than 18 years with an increased risk of herpes zoster were pain around the injection site (68.1%), myalgia (32.9%), fatigue (32.2%) and headache (26.3%). Furthermore, the frequency of side effects in the form of gastrointestinal symptoms like nausea, vomiting, diarrhoea and/or abdominal pain exceeded 10%. The median duration of the side effects was 2-3 days. The safety profile for the adult immunocompromised patients ≥ 18 years was in line with the one observed among patients aged +50 years.

For information about other side effects and contraindications and conditions pertaining to fertility, pregnancy and breastfeeding, please see the Summary of Product Characteristics.

Shingrix is to be stored at 2-8 °C and any handling outside of a refrigerator must be minimised. The vaccine may never be frozen or stored at temperatures exceeding 30 °C.

Shingrix must be reconstituted prior to administration. The powder and the liquid are mixed and then gently shaken until the powder has dissolved completely. The reconstituted vaccine is an opalescent, colourless to pale brownish liquid. After reconstitution, the vaccine must be used immediately and within six hours if stored in a refrigerator.

Shingrix may be ordered as from 1 October using electronic Form 6 under the SSI item no. 104035.