The offer of free HPV vaccination for boys and young men included in the catch-up programmes will expire on 31 December 2021. As some of the included persons have turned 15 years old, it is recommended that they complete a three-dose programme with an interval of 1-2-months between the first and second dose, and an interval of 3-4-months between the second and third dose. This means that their vaccination programme must be initiated no later than 31 August 2021 in order to complete the vaccinations before the free programme expires.

The catch-up programmes were introduced in February 2020 and cover:

The offer expires when the person turns 26 years old.

The HPV vaccination coverage can be seen at statistik.ssi.dk.

Read more about HPV vaccination for girls and boys at ssi.dk.

In 2019, the Department of Infectious Disease Epidemiology and Prevention received 123 notifications of chronic hepatitis C. In 2020, the corresponding figure was 165 notifications.

For a detailed epidemiological account of the incidence in 2019 and 2020, please see annual reports on disease incidence.

For chronic hepatitis C, the median age has increased steadily from nearly 40 years in 1991 to the current nearly 50 years, and from nearly 35 years to nearly 45 years for acute hepatitis C. 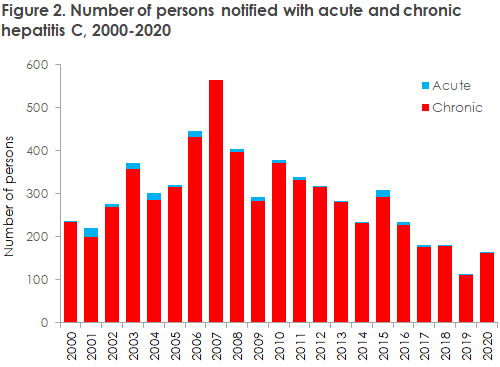 The notification incidence was highest on Funen and in West Jutland. The largest increase, however, was observed in West and South Zealand. The relatively high incidence on Funen may likely be explained by a particularly intensive hepatitis C tracing effort in the context of the project “C Free South”and a special effort made to ensure that cases are notified.
The total incidence increased from 1.9 in 2019 to 2.8 in 2020 despite the COVID-19 epidemic. No obvious explanation exists for this increase, and it may simply be a common fluctuation.

The Danish Health Authority recommends that migrants from high-endemic countries such as Egypt, Pakistan and Rumania be tested for hepatitis C at their first contact with Danish healthcare, ideally when arriving to Denmark.

Sexually transmitted infection
In 2019 and 2020, a total of seven cases and one case, respectively, were notified as presumably having been infected through sexual contact between MSM. Among these eight cases, six were notified as acute cases, and three of the cases were detected in persons with concurrent HIV infection, whereas the rest were not infected by HIV. The relatively high occurrence of non-HIV infected people compared with previous years may possibly be caused by more MSM undergoing hepatitis C testing when they receive prophylactic HIV treatment (PrEP), which may thus indicate an increased occurrence of undiagnosed asymptomatic hepatitis C among MSM.

Recent years have brought reports of hepatitis C outbreaks among MSM in connection with so-called chemsex; a concept describing the use of drugs to enhance and extend sex. It is known that chemsex is also practiced in Denmark, primarily in larger cities. The notifications made to the SSI do not always state if infection in the notified hepatitis C cases among MSM was transmitted through chemsex. It is important to be aware of the risk of infection through chemsex and to disseminate knowledge of how such infection may be prevented.
Heterosexual transmission was stated as the presumed mode of transmission in tree cases in 2019 and in one case in 2020.

In the US, trials are ongoing in which pregnant women in their third trimester receive hepatitis C treatment to prevent mother-to-child transmission. Women who are known to have hepatitis C are not recommended to avoid either pregnancy or breastfeeding.

Denmark has joined the WHO objective to eliminate hepatitis C before 2030. In practice, with 2016 as the base year, this means that the incidence needs to decline by 90%, that 90% of the infected persons need to have been diagnosed and that 80% of these need to have been treated.

For a number of years, the number of notified hepatitis C cases has followed a declining trend, which may be owed to an decreasing incidence among young drug users, among others because fewer (young) drug users inject their drugs. This is also reflected in a steadily increasing age among the notified persons. Access to drug consumption rooms in major cities and an emphasis on access to clean injection kits have also reduced the risk of infection. Furthermore, more persons are in treatment and the overwhelming majority of hepatitis C patients in outpatient treatment are now estimated to have been cured. All things being equal, this reduces the infective pressure.

As it is not yet possible to monitor hepatitis C laboratory results for most Danish regions, and notification reminders therefore cannot be sent out, it is estimated that the number of hepatitis C cases is far higher than the figures accounted for herein. A Danish study from 2016 based on so-called capture-recapture calculations and data from multiple registers assessed that approx. 10,000 persons are living with chronic hepatitis C in Denmark, corresponding to 0.21% of the population. Furthermore, the study estimated that approx. one fourth of these people have yet to be diagnosed and that only about half of the diagnosed cases are notified. Due to the low notification percentage, it is difficult to interpret the differences in the incidence of notified cases shown in the Annual Report. Thus, these differences may reflect inter-departmental differences in notification procedures as much as they reflect real incidence differences.

A laboratory-based - and therefore more accurate - monitoring may help provide a better estimate of the total number of infected people in Denmark and thereby an improved estimate of how many need treatment. Furthermore, laboratory-based monitoring may help determine if additional initiatives are needed to meet the WHO objectives that Denmark has an obligation to reach no later than by 2030.

In order for Denmark to meet the WHO objective to eliminate hepatitis C by 2030, all potentially infected people must be offered testing and treatment. We take this opportunity to underpin once more that hepatitis C treatment has been made available to everyone in Denmark and that its cost has declined considerably.

Furthermore, the prophylactic measures against hepatitis C include making available sterile injection kits to persons with an intravenous drug use. The Danish Health Authority has published an inspirational catalogue for municipalities aiming to qualify their damage-reducing efforts in relation to the dispensing of sterile injection kits by describing the possible contents of a dispensing practice.