The largest study conducted to date demonstrates that HPV vaccination effectively prevents cervical cancer and that an early intervention makes the biggest difference.

Normally, chronic HPV infection takes up to 20 years to develop into cervical cancer. Therefore, the 11-year follow-up period of the study is relatively short. Despite this, the researchers found significant protection from cervical cancer in the vaccinated compared with non-vaccinated girls and women.

In Denmark, boys and girls are offered a full HPV vaccination programme when they are 12 years old, as protection against cervical and anal cancer, among others. As per 8 November 2020, the share of initiated immunisation programmes (HPV1) for girls in Denmark exceeds 80% for all birth cohorts born between 1997 and 2007 - i.e. the girls who have been vaccinated since the programme became operational in early 2009 (see statistik.ssi.dk). In connection with a crises of confidence in the HPV vaccination programme from 2013 to 2016, the share of vaccinees declined for several cohorts, and in particular for girls born in 2003 and 2004. It is therefore encouraging to see that coverage has reached the level recorded among the birth cohorts preceding the crisis. In the 2008 birth cohort, who will turn 12 years during 2020, 64.5% had received the initial HPV vaccination (HPV1) as per 8 November 2020, see Figure 1. Not everyone in this birth year have received two HPV vaccinations yet and thereby concluded their immunisation programme. 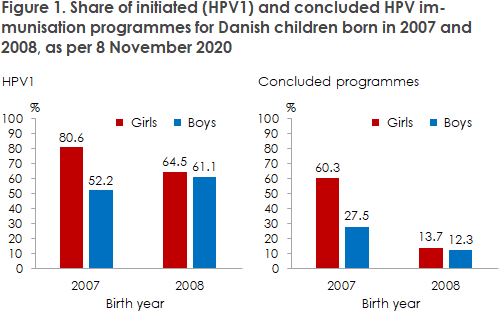 Looking at vaccination coverage by province, the same trend is seen among girls and boys for the birth year 2008, see Figure 2. For both sexes, the City of Copenhagen has the lowest coverage; 59% for girls and 56% for boys. The highest vaccination coverage is seen in North Jutland, where 67% of the girls and 64% of the boys have been vaccinated. The low vaccination coverage in the City of Copenhagen is not a new phenomenon – this trend is also seen among girls if we go further back in time (see statistik.ssi.dk). We are still some way away from the goal of 95% coverage, but the fact that the boys are now also accepting vaccination increases community immunity and indirectly contributes to protect unvaccinated persons of both sexes. 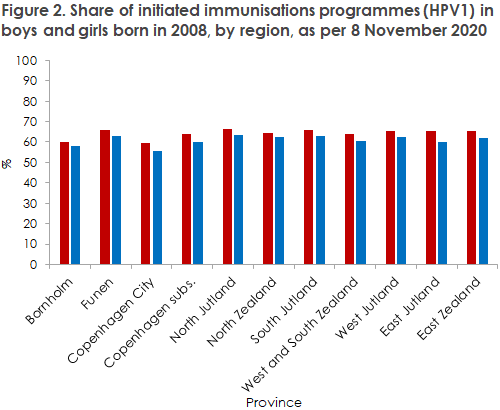