Statens Serum Institut (SSI) in collaboration with the Danish Veterinary and Food Administration is investigating a shigellosis disease outbreak. Forty-four persons were linked to this outbreak. The investigation shows that the source of infection is likely from imported fresh mint. The outbreak is now considered to have concluded.

Shigella bacteria are only found in humans. Infected persons excrete the bacterium in their stool, and transmission may occur from person to person (faecal-oral transmission) or by ingesting food or water that has become contaminated with the bacterium. Infections with shigella bacteria are not common in Denmark and are typically acquired in connection with travels abroad. Foodborne disease outbreaks caused by shigella species are unusual and mostly caused by foods imported from endemic countries. Recent foodborne shigella outbreaks in Denmark include one in 2007 and another in 2009. In 2007, 215 persons became ill after ingesting contaminated imported baby corn, EPI-NEWS 35/07. The other minor outbreak which occurred in 2009 in which imported sugar peas from Kenya was identified as the source of the outbreak, EPI-NEWS 36/09.

The infectious dose of shigella is very low (10-500 bacteria) and raw vegetables can become heavily contaminated. It is uncertain if rinsing fruits, vegetables and herbs with an uneven surface, using water alone is sufficient to reduce bacterial contamination to a safe level. Shigella bacteria cannot survive heat treatment.

Shigella infection typically causes an acute intestinal infection with general malaise, diarrhoea, stomach ache and, in some cases, nausea, vomiting and/or fever. Symptoms typically present 1-3 days after exposure, but the incubation period can be up to one week. In the majority of cases, the infection is self-limiting. In rare cases, shigella infections can be serious. These are considered as shigella dysentery (blood, mucus and pus in the stools, fever and general malaise), and seeing your doctor or admission to hospital may be necessary.

Signs of an outbreak

On 11 September 2020, SSI became aware of a shigellosis outbreak that was likely foodborne. Suspicion was raised by an increasing number of shigellosis notifications (form 1515) and several enquiries directly from social events where a large share of the participants had fallen ill following the event.

A case was defined as a patient with either a culture-positive Shigella sonnei test or an ipaH PCR-positive test in the period from August 2020 onwards. Patients who had travelled abroad in the week leading up to their disease onset and who tested positive for other shigella types than S. sonnei were excluded. The case definition is broad as most patients are identified based on PCR testing made at the clinical microbiology departments where it is not possible to distinguish between shigella species and entero-invasive E. coli. SSI received only a limited number of isolates.

The outbreak comprises 44 cases, Figure 1, including 30 women and 14 men aged 0-75 years, Figure 2. The patients presented with symptoms in the period from 22 August 2020 to 9 September 2020. A total of 13 persons were admitted to hospital. We were made aware of a total of five events where the participants were subsequently diagnosed with shigellosis. In addition to the identified cases, another approx. 60 persons fell ill after having participated in one of the events. The persons whom SSI did not receive a notification nor a test result are not included in the below description. The affected persons mainly reside in the Capital Region of Denmark (one case lives in Jutland but had attended an event in the Capital Region). 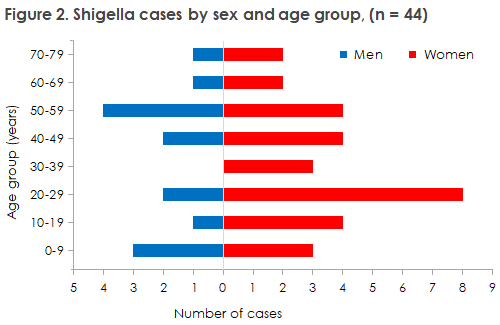 Interviews clearly suggested that fresh mint was the source of the outbreak. Among the 36 interviewed cases, 24 (67%) had ingested fresh mint in the period leading up to disease onset. Of the 24 cases, 22 had bought the mint in a greengrocer/bazar. A total of 12 greengrocers/bazars in the areas of Greater Copenhagen and Roskilde were mentioned, indicating that the source of infection is a locally traded food.

Whole-genome sequencing of isolates from cases attending four of the five known events as well as isolates from sporadic cases were genetically closely related, which confirms that this was a single outbreak rather than several smaller outbreaks.

On 16 September 2020, the SSI put out an international inquiry via the ECDC’s urgent inquiry system, but no other countries reported a concurrent increase in the number of shigella cases.

Based on the epidemiological investigations, fresh mint sold in various greengrocers/bazars in the Greater Copenhagen area was the suspected source of the outbreak. The Danish Veterinary and Food Administration had therefore focused tracing efforts on fresh mint, well aware that the, one or more, batch(es) in question are likely no longer available on the market. Reverse tracing of fresh mint showed that it was sold from local greengrocers/bazars and not in retail chains. Reverse tracing was hampered by the fact that several greengrocers/bazars had used several providers in the period in question and had acquired various types of mint, packaged in different ways, i.e., in a pot or as mint cuttings. Lack of invoices for purchases of mint among the involved greengrocers/bazars has further hampered reverse tracing. Even so, reverse tracing indicates that imported fresh mint is very likely the source of the outbreak. The Danish Veterinary and Food Administration has seized mint, and in individual cases the Danish Veterinary and Food Administration has assessed that sampling and analyses were relevant.

Fresh mint can explain 24 of 36 (67%) interviewed cases and is therefore the suspected source of the outbreak. Only rarely may all cases of an outbreak be explained by the suspected outbreak source, but in this case there is a high probability that some cases cannot be explained as the case definition is broad (comprises Shigella species as well as entero-invasive E. coli). The outbreak is considered to have concluded as no new related cases have been observed since 15 September 2020. The duration of the outbreak indicates that a single or a limited number of batches of contaminated food with a short shelf life was likely the source - which is consistent with mint. The Danish Veterinary and Food Administration has concluded its efforts to traceback mint. As the outbreak has now concluded, and as the (one or more) batch(es) which were the suspected source of the disease outbreak are no longer on the market, there is no reason to recall any foods. In connection with the investigation, the Danish Veterinary and Food Administration has seized untraceable mint, and samples were taken for subsequent analyses where this was assessed to be relevant. The results of these analyses are pending.