This week’s EPI-NEWS summarises the most important aspects of this influenza season, whereas a more comprehensive description of the influenza occurrence is available in the 2019/2020 Annual Report on Influenza.

The 2019/20 influenza season was mainly dominated by influenza A. The subtypes (H1N1)pdm09 and (H3N2) were seen with almost the same frequency in the beginning of the season, but towards the end, influenza A (H3N2) comprised the majority of the detected cases. Only a few cases of influenza B were recorded, mainly of the Victoria subtype.

The number of patients who contacted their general practitioner with influenza-like illness (ILI) was thus very low throughout the season, until COVID-19 reached Denmark in late February, causing a considerable increase in patients with influenza-like illness within a few weeks, Figure 1. Thus, the share of ILI-patients observed in the sentinel scheme in the beginning of March increased from approx. 1% to approx. 6% within a few weeks. However, the increase was also linked to the fact that the sentinel scheme was extended to include a slightly broader disease definition in order to follow the community spreading of COVID-19, and that phone consultations and sampling by throat-swabbing in the patients’ home were introduced. In the following weeks, the ILI-consultation percentage decreased again when Denmark started its lockdown i.e. social distancing, use of hand disinfectants etc. to avoid transmission of COVID-19, Figure 1. 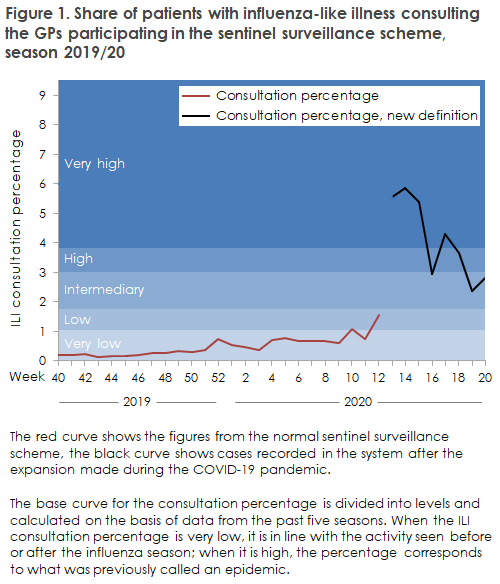 An increase in the number of contacts to emergency service physicians was also seen around the time of the first COVID-19 cases in March, after which the pattern returned to normal during lockdown, Figure 2. 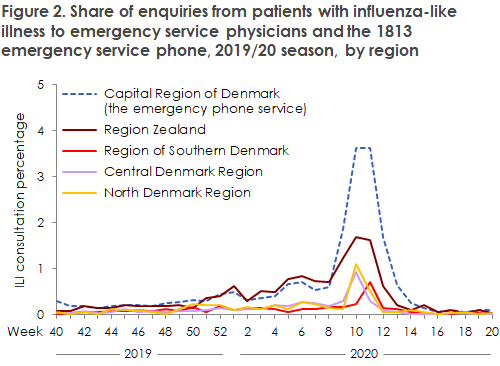 Among Influmeter participants, approx. 900 persons reported their symptoms weekly from October 2019 to March 2020. In the following months, Influmeter was also used for volunteer COVID-19 symptom reporting, and the number of participants rose to approx. 35,000.

In total, 5,300 cases of influenza-like illness were recorded among the season’s 35,000 participants. The seasonal variation in influenza-like illness seen was the same as the previous years. The highest number of cases was recorded in week 52 when approx. 4% reported ILI-like symptoms, Figure 3. The season ended with the lowest share of participants in the past six years reporting influenza-like illness. The considerable decrease after week 12 is likely associated with the introduction of restrictions to curb COVID-19. These were initiated towards the end of week 11, causing a drastic drop in influenza and other airway infections in the subsequent weeks.

Detection of laboratory-confirmed influenza in the 2019/20 season dropped drastically from 20% influenza-positive samples in week 11 to <1% in week 14, 2020. The most dramatic drop in the number of positive influenza samples was observed in the days immediately after the Danish Government implemented the lockdown of Denmark in week 12, Figure 5. That big a drop in the influenza positive percentage during only a few weeks has not previously been observed. For more information, please see Influenza-Nyt from week 13, 2020 (in Danish). 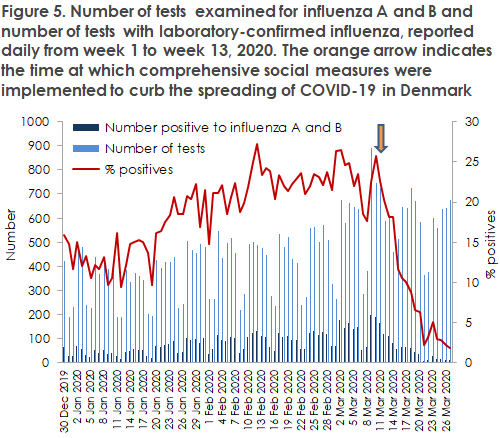 Among the samples tested during the season at the National Influenza Centre for WHO, located at Statens Serum Institut, , 94% were positive for influenza A virus and 6% for influenza B virus.

The low occurrence of influenza in the 2019/20 season was also reflected in the number of patients admitted to hospital. A total of 2,290 patients were admitted with influenza, the lowest number recorded in five years, Figure 6. Among the admitted patients, 2,159 had influenza A (94%), and 138 had influenza B (6%). The median age of the patients was 62 years, and the majority (69%) had not received influenza vaccination ahead of the season, Table 1. 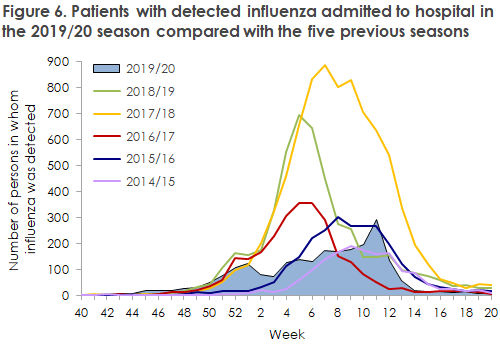 From 1 November 2019 through 15 January 2020, seasonal influenza vaccination was offered free of charge to persons with an increased risk of serious illness. Pregnant women in their second and third trimester and persons with immune deficiency as well as their contacts could get vaccinated until 1 March 2020, EPI-NEWS 41/19. In the 2019/20 season and the for first time ever, 4-valent inactivated influenza vaccines that protect against two types of influenza A and two types of influenza B were used in all risk groups.

A total of 888,507 influenza vaccines were registered as having been administered in 2019/20. Of these, 600,600 vaccines were given to elderly people aged 65 years or older, corresponding to a 52% vaccination coverage in this group. This is on the same level as in 2018/19. It should be mentioned that administrative changes have been introduced in the service codes used for risk groups in the 2019/20 season, and therefore it is difficult to compare the vaccination coverage directly with previous seasons.