Eight of these patients (36%) died of or with LD. Four cases are believed to have become infected during travels within Denmark.

For many years, the province of Funen has recorded the highest incidence of any Danish province. In 2019, Funen registered 9.6 cases per 100,000 inhabitants, which is the highest incidence ever recorded in a Danish province. Preliminary results from a study on the association between testing activity and the number of detected cases indicate that a high testing activity on Funen may, in part, explain the high number of cases recorded there.

A total of 55 patients had become infected during travels abroad. The most frequent travel destination was Italy, accounting for 11 cases. For many years, Italy has been the country where the highest number of Danes and Europeans have become infected by travel-associated Legionnaires' disease.

Legionella pneumophila was isolated by culture from 111 patients and Legionella parisiensis from one patient. The serogroup distribution is similar to that observed in previous years when serogroup 1 comprised approx. 60% and serogroup 3 approx. 20% of all clinical isolates.

As described in the annual report, 2019 recorded relatively few patients with a positive legionella urinary test (LUT) (n=69; 26%), and a relatively high number of cases were PCR positive (241; 90%) compared with previous years. For the 2014-2018 period, the share of LUT and PCR positives thus averaged 45% and 80%, respectively, Figure 1. Please note that patients may have positive results from more than one test.

According to the case definition from the European Centre for Disease Prevention and Control (ECDC), a positive PCR is considered only a sign of probable Legionnaires' disease, whereas LUT in conjunction with clinical pneumonia confirms the diagnosis. In 2019, eight PCT-negative patients were LUT positives.

Although the sensitivity of LUT is low due to the high number of non-serogroup 1 infections, LUT testing is encouraged on suspicion of Legionnaires' disease. We also encourage testing broadly for Legionella spp. and specifically for Legionella pneumophila by PCR. Samples from the lower respiratory tract provide better and more reliable results than samples from other locations. It is also important to attempt culture from the PCR-positive samples as this will, among others, allow for comparison with water/environmental samples, detection of the source of the infection and prevention of additional cases. If this cannot be done locally, the sample may be submitted to the SSI. 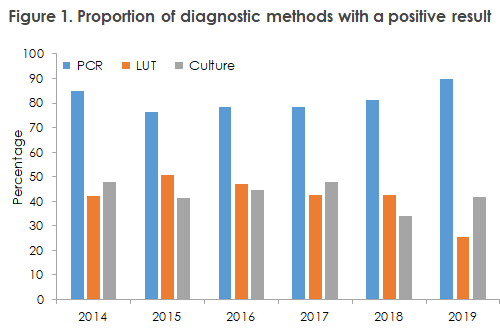 In 2018, an interdisciplinary workgroup was established. The group is coordinated by the Danish Transport, Construction and Housing Authority and counts the participation of Statens Serum Institut, Danish DCMs, the Danish Health Authority, the Danish Environmental Protection Agency, Danish Municipalities and the Danish Patient Safety Authority. The group’s task is to elucidate differences in incidences recorded in Danish areas, including differences and changes relating to demographics, accommodation, climate, water consumption, district heating temperatures, testing activity and occurrence of Legionella in the water. A final report is expected for 2021.

In connection with the corona crises, the ESCMID Study Group for Legionella Infections (ESGLI) has prepared a guideline on the handling of temporarily closed water systems to prevent infection associated with stagnant domestic water at closed hotels and other buildings. The guideline is available from the ECDC’s website, and from the SSI’s website, where you will also find a Danish language version. Furthermore, the Danish Transport, Construction and Housing Authority has published a news item on the topic.