Please note that the first phase includes vaccination of nursing-home residents, persons with a particularly high risk of invasive pneumococcal disease and elderly people ≥ 65 years of age who have an increased risk of pneumococcal disease due to chronic disease. Note that in pursuance of the Executive Order, vaccinations should be ordered for risk groups only. Orders may be made continuously.

Additional groups will not be offered pneumococcal vaccination until the autumn, as more vaccines become available. This applies to persons who are 65 years of age or more who do not belong to a risk group and to other person groups below 65 years of age who have an increased risk of invasive pneumococcal disease.

Vaccination may be performed by a doctor authorised to practice medicine in Denmark or it may be delegated by such doctor. For further information, please see the website of the Danish Medical Association.

How to handle previous PPV23 vaccination

The Danish Vaccination Register has been open to citizens and health workers since 1 February 2013. Healthcare workers have had a statutory duty to report all vaccinations made as from November 2015. Consequently, vaccinations administered prior to this date may not be recorded.

In view of the continued high number of whooping cough cases in the beginning of 2020 and on recommendation from the Danish Health Authority, the Danish Minister of Health previously decided to extend the temporary offer of free whooping cough vaccination to pregnant women in their third trimester until 30 April 2020, EPI-NEWS 6/20.

As part of the new vaccination package of the Danish Government and Parliament, it has been decided to further extend the offer until the end of 2020.

Following the Danish lock-down on 11 March as part of the COVID-19 containment strategy, the number of samples submitted for whooping cough testing has declined considerably and it is therefore uncertain to which extent the whooping cough incidence was affected by the lock-down, Figure 1. 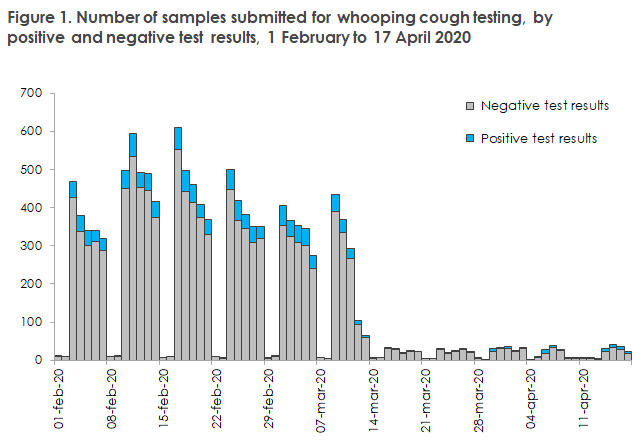 Based on two periods of approx. the same length just before and after the lock-down on 11 March, the total number of samples tested for whooping cough declined by 92.8%, Table 1.

The reduction was lowest among infants, 84.3%, whereas it reached at least 90% for all other age groups. Concurrently with the steeply declining number of samples, the share of positive samples increased overall by one third from 10.3% to 13.8%, recording increasing positive percentages in most age groups, indicating a more focused sampling activity, particularly among young children aged less than five years and among adults aged 20-29 years of age. Conversely, the positive percentage among school-aged children has decreased in the period during which the children have stayed at home. It is important to be aware of the fact that the share of positives in the latter period is based on small numbers.

The lock-down of Denmark on 11 March to alleviate the spread of COVID-19 has probably also suppressed the spreading of whooping cough, which is underpinned by the declining number of young children admitted to hospital. Even so, it is important to remain attentive to this differential diagnosis, particularly in unvaccinated or partially vaccinated infants in whom the infection may run a serious course. Children may (as previously) be referred by phone for acute work-up and treatment for moderate to serious airway infection in the COVID-19 track of the paediatric admission or in a special regional COVID-19 assessment unit for children, in pursuance of the Danish Health Authority’s recently updated COVID-19 guidelines.

Acute and chronic hepatitis B 2019

For a detailed epidemiological description of the 2019 incidence, please see the 2019 annual report on acute and chronic hepatitis B.

The number of notified cases of acute hepatitis B remains very low. Five of the six cases in this group were sexual transmissions.

Although the acute hepatitis B incidence is low in Denmark, it remains important to consider vaccination prior to travels to high-endemic countries if unprotected sex with someone from the area is a possibility. Furthermore, we recommend hepatitis B vaccination if your partner is from a high-endemic country or is a man who has sex with other men, or engages in other known risk behaviours, cf. the Danish Health Authority’s guideline on HIV and hepatitis B and C.

The incidence of chronic hepatitis B has followed a decreasing trend in recent years and remains low, Figure 2.

In 2019, a total of 78 pregnant women were notified with chronic hepatitis B. In all, 77 hereof were detected in the 2019 pregnancy screening, the final person was found during a pregnancy in 2016.

One child was notified, presumably with intrauterine transmission.

All pregnant women who test hepatitis B positive shall be referred to specialty departments (infectious medicine or gastro medicine) for further work-up, control and, if relevant, treatment. This is important, not least because today it is possible to treat pregnant women with a high viral load who would otherwise have a considerable risk of inter-uterine infection of their child.

Children born by hepatitis B-positive mothers shall be given immunoglobulin and vaccine at birth (so-called post-exposure vaccination) and when they are one month (e.g. at the five-week examination), two months and 12 months old to reduce their risk of mother-to-child transmission during labour.

We stress that children born by mothers who have hepatitis B should be tested for hepatitis B 1-2 months after they have concluded their hepatitis B vaccination to determine their vaccination B status and the effect of the vaccine. A blood sample is taken to test for quantitative anti-HBs and HBsAg. This is done at the child's GP.

The Danish Health Authority recommends testing persons from high-endemic countries, regardless of their sex, at their first contact with Danish healthcare. This also applies to adopted children.
Furthermore, we encourage that whenever a person tests positive for hepatitis B, the person’s sexual partner(s) and children should also be tested.

Acute hepatitis B reflects travel behaviours and a negative vaccination status in men who have sex with men (MSM) and IV drug users and persons who have sex with immigrants and second-generation immigrants from high-endemic areas who have become infected at birth. In contrast, the number of chronic hepatitis B cases reflects the testing and notification frequency as well as immigration and incidence in the countries of origin. As the frequency of testing and notification is presumably not declining, the reduction in the number of chronic hepatitis B cases was caused either by a decrease in the number of immigrants or a declining incidence in the countries of origin. If the latter is true, the WHO’s 1992 recommendations that hepatitis B vaccination should be a part of all countries’ childhood vaccination programme may be starting to take effect.