Invasive pneumococcal disease (IPD) is defined as a disease episode for which pneumococci (Streptococcus pneumoniae) have been detected in cerebrospinal fluid, blood or another normally sterile sampling material. IPD is primarily blood poisoning and meningitis (6-10%). This issue of EPI-NEWS focuses on isolate-based monitoring and is based on data from submitted isolates and from the Danish Microbiology Database, MiBa.

The 7-valent pneumococcal conjugate vaccine (PCV-7) was introduced into the Danish childhood vaccination programme on 1 October 2007; and as from April 2010, it was gradually replaced by the 13-valent pneumococcal vaccine (PCV-13), which has superior coverage. A total of three vaccinations are recommended at 3, 5 and 12 months of age. The PCV-7 vaccine protects against seven serotypes (4, 6B, 9V, 14, 18C, 19F og 23F), whereas PCV-13 protects against thirteen serotypes (the PCV-7 serotypes and serotypes 1, 3, 5, 6A, 7F and 19A).

For a detailed description of the occurrence of invasive pneumococcal disease in 2018 and 2019 and of vaccination coverage, please see the annual report.

In 2018 and 2019, a total of 799 and 639 IPD cases, respectively, were detected in Denmark. This corresponds to incidences of 13.8 and 11.0 per 100,000. Thus, 2019 became the year with the lowest number of cases recorded since the introduction of pneumococcal vaccination into the childhood vaccination programme in 2007. For comparison, the incidence prior to the introduction of the vaccine was approx. 20 per 100,000.

IPD is primarily seen among very young children and elderly people, and, in general, the occurrence of IPD has followed a decreasing trend since the introduction of the PCV vaccine. The PCV vaccine, in particular, has had a substantial effect on the occurrence of IPD among very young children, as the incidence among the <2-year-olds decreased from 55 per 100,000 in the period 2000-2007 to 10 and 19, respectively, in 2018 and 2019. The effect is also observed in other age groups; and among elderly people, aged 65 years or more, the incidence thus declined from 66 per 100,000 in the 2000-2007 period to 47 and 36 in 2018 and 2019, respectively. The figure presents the incidence per age group as IPD per 100,000 per year. 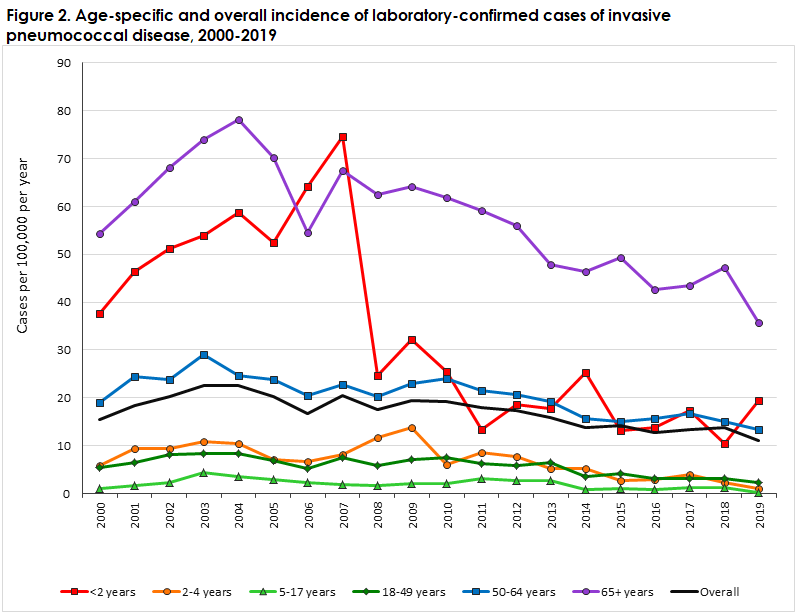 The effect of the vaccination programme

The introduction of the PCV vaccines into the childhood vaccination programme has had a considerable impact on the occurrence of IPD in young children, but the impact has also been substantial for IPD among the population in general. This is owed to the so-called herd effect by which general spreading of pneumococci in the population has been reduced because the occurrence among young children has declined. Overall, the incidence was almost halved from 2007 to 2019.

The occurrence of the serotypes comprised by the PCV vaccine was reduced considerably after the introduction of the vaccine. Even so, the occurrence of non-vaccine serotypes has increased in recent years as has been the case in other countries. Among these, serotype 8 is dominant with 26% of all cases in 2019. Worldwide, efforts are being made to develop vaccines that cover more, or other, types than those currently covered.

Now for the seventh time, the SSI invites GPs and practice staff with a healthcare background related to vaccines and vaccination to attend an instructive and educational day focusing on the childhood vaccination programme. The day will comprise sessions offered by general practice, the WHO, the Department of Infectious Disease Epidemiology and Prevention and the Danish Health Authority, and there will be ample opportunity to ask questions and share experiences from clinical practice. This year, the venue is Comwell Hvide Hus in Aalborg.

See the programme and learn how to sign up.