Since 2010, the number of Danes who have been vaccinated abroad following possible exposure to rabies has more than doubled. 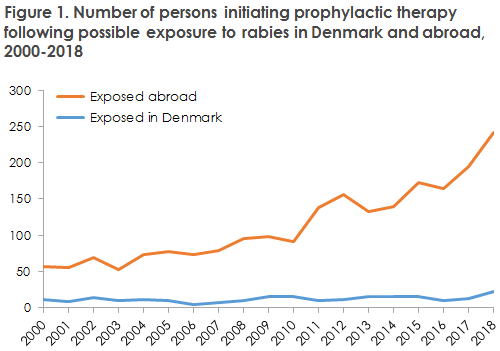 For a detailed description of rabies post-exposure prophylaxis and animals tested in Denmark in 2018, please see the annual report on rabies.

Rabies is preventable if you initiate treatment after possible exposure to the infection. In Denmark, possible exposure is almost exclusively due to bat bites, but it is important to be aware of the risk of infection from dogs that have been imported illegally from Eastern Europe.

In case of bat bites in Denmark, the bat should be caught, if possible, and submitted for rabies testing at the National Veterinary Institute, Technical University of Denmark, by agreement with the Regional Food Inspectorate.
It is important to monitor the occurrence of rabies in Danish bats. The prevalence of rabies among bats in Denmark remains unknown as only few bats are tested. If a bat tests negative, the vaccination series is terminated.

The number of persons with possible exposure to rabies abroad has increased more than two-fold since 2010. In 2018, exposure abroad constituted 92% of all exposed cases.

Worldwide, 95% of all human rabies cases are associated with dog bites, and dog bites is the primary reason why Danish travellers receive prophylactic treatment. In recent years, several people have become bitten by monkeys abroad, but monkeys constitute a lower risk than dogs. If you are bitten by a monkey in a monkey park (which has occurred to several Danes), it is important to collect information about the monkeys in the park. For instance, in Ubud Monkey Forrest on Bali, the park writes that no rabies has been detected in its monkeys for the past 14 years, why the risk of exposure may be considered insignificant.

Among all of those exposed in 2018, only six persons had received PrEP before embarking on their journey.

When giving advice prior to foreign travel, it is important to mention the risk of rabies associated with contact to animals. Travellers should be advised to limit contact to animals and to see a physician without delay in case of a bite. It is also important to inform travellers that HRIG treatment is unavailable in many parts of the world.

It may be considered whether pre-exposure vaccination should be given, even in connection with short journeys to rabies-endemic countries. Such vaccination is particularly relevant if the nature of the journey will make it difficult to reach medical treatment within few days.