As described in EPI-NEWS 45/19, the growing international demand for HPV vaccines for use in vaccination programmes means that for a prolonged period of time, the manufacturer of Gardasil 9 will be unable to provide the vaccine for use in persons who do not receive the vaccine as part of the childhood vaccination programme. Thus, the SSI will not receive any more Gardasil 9 vaccines for the private market until the beginning of 2021, at the earliest.

It is important to underline that sufficient Gardasil 9 vaccines are available to meet the demand of the childhood vaccination programme. This includes catch-up vaccination in 2020 and 2021 of children born in 2006 and the first half of 2007, and of young men aged 18-25 years who have sex with men, once the recently agreed 2020 public finance act is passed by the Danish Parliament.

The target group is not stated when ordering HPV vaccines for the extended programme. HPV vaccines provided free of charge for use in the vaccination programme may not be used for other purposes.

Some doctors or vaccination clinics may still have Gardasil 9 on stock for use on the private market. As mentioned in EPI-NEWS 45/19, the private market is expected to be able to meet, in part, the demand for Gardasil 9 through parallel import, but these vaccines will be marketed through pharmacies.

In 2018, the Department of Infectious Disease Epidemiology and Prevention received eight notifications of acute hepatitis C; seven of which were men. Furthermore, a total of 179 cases of chronic hepatitis C were notified, including 132 (74%) men and 47 (26%) women.

For a detailed epidemiological account of the incidence in 2018, please see here. 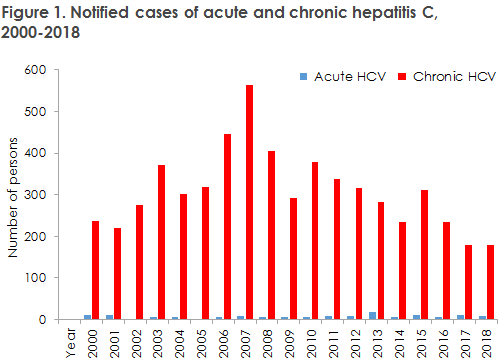 Even though the majority of those notified had become infected due to IV drug use, some (13%) had become infected abroad. The Danish Health Authority recommends that migrants from high-endemic countries such as Egypt, Pakistan and Rumania be tested for hepatitis C at their first contact with Danish healthcare, ideally when arriving to Denmark.

Men who have sex with men

Among the six men who were notified as having become infected as MSM, two were known HIV positives and two were receiving PrEP (Pre-Exposure Prophylaxis, HIV medication used preventively in HIV-negative risk groups). Five of the six were notified with acute hepatitis C. The reason why these five persons had been notified with acute rather than chronic HCV was that they had been tested as part of frequent controls of HIV positives and PrEP users. The sixth and final person was HIV negative and did not participate in any organised testing scheme and thus did not have a recent negative hepatitis C test. Therefore, he was notified with chronic hepatitis C.

London as well as several other major European cities have reported an increasing number of MSM infected with hepatitis C through so-called chemsex, i.e. use of drugs to enhance and prolong sex. Chemsex is known to be practiced in Denmark, primarily in large cities. The SSI’s notification system does not allow us to establish if infection in the notified hepatitis C cases among MSM was transmitted through chemsex. Even so, it is important to be aware of the risk of infection through chemsex and to disseminate knowledge of how such infection may be prevented.

A single child in Denmark was notified as having become infected at birth in 2018. The case was identified by chance as the child was tested after the mother’s status had been established. Hepatitis C is not covered by the pregnancy screening, partly because of its low incidence among women of child-bearing potential, because of the low risk (5-10%) of transmitting virus to the child, and partly because infection in connection with pregnancy cannot currently be prevented, in contrast to hepatitis B. In the US, trials are ongoing in which pregnant women in their third trimester receive hepatitis C treatment to prevent mother-to-child transmission. Women who are known to have hepatitis C are not recommended to avoid either pregnancy or breastfeeding.

Denmark has joined the WHO objective to eliminate hepatitis C before 2030. In practical terms, this translates into a 90% decrease in incidence, 90% diagnosed and 80% in treatment.

The number of hepatitis C cases notified in Denmark has been decreasing for a number of years. Several causes may explain this decline, the main reason is probably a declining incidence among young drug users. This is reflected in a steady increase in the age of the people notified. The declining incidence is probably also associated with the decreasing share of (young) drug users who inject their drugs.

Furthermore, an increase has been observed in the number of patients who have received treatment, which - all else being equal - testifies to a reduction in the infection pressure. Access to drug consumption rooms in major cities and an emphasis on access to clean injection kits have also reduced the risk of infection. As from 1 November 2018, hepatitis C treatment has been offered freely in Denmark, meaning that everyone affected by hepatitis C is now entitled to receive treatment. This has brought a considerable increase in the number of people treated; and by the end of 2019, we expect that >80% will be attending controls and receiving treatment.

It is known that the number of people infected with hepatitis C exceeds by far the figures reported here. Thus, it is estimated that 10-15,000 patients live with chronic hepatitis C in Denmark and, among these, only 20-30% have been notified. At a so low notification rate, it is difficult to interpret the differences in the incidence of notified cases reported in the annual report, as these differences reflect differences in notification procedures between the departments as much as real incidence differences.

A laboratory-based system would make hepatitis C monitoring more flexible and precise. Accurate monitoring may help produce better estimates of the total number of infected people in Denmark, and may therefore also be useful in establishing how many need treatment.

Drug use and hepatitis C remain heavily stigmatized and many drug users speak of discrimination and bad conscience brought on by healthcare workers who stress that treatment is very costly. We take this opportunity to underpin once more that hepatitis C treatment has been made available to everyone in Denmark and that its cost has declined considerably. In order to meet the WHO objective to eliminate hepatitis C by 2030, all potentially infected people must be offered testing and treatment.