Prolonged non-specific disease in cardiac valve-operated people: Mycobacterium chimaera infection associated with the use of heater-cooler equipment is a novel and rare, but important differential diagnosis.
Meningococcal disease 2018

Prolonged non-specific disease in cardiac valve-operated people: Mycobacterium chimaera infection associated with the use of heater-cooler equipment is a novel and rare, but important differential diagnosis.

Studies have shown that infection in the operation theatre had probably occurred from the medical devices via aerosoles, i.e. as droplets containing bacteria that spread through the air to the surgical wound. The bacterium does not cause human-to-human infection, and the risk of becoming infected from the medical devices is assessed as being very limited, i.e. 1-2 per 1,000-2,000 operated patients where HCU is used. The symptoms of infection may be non-specific and similar to other disease patterns, and the bacterium is difficult to detect. Treatment requires prolonged antibiotics therapy.

As the onset of the infection may occur after a delay of several years, it is important that doctors in general are attentive to patients with relevant symptoms, so that they may undergo further work-up. The patients are those who since 2013 have undergone open cardiac surgery, particularly where foreign bodies were inserted, i.e. heart valves, etc. The symptoms may be non-specific; for a more detailed description, please see the SSI website .

Following advice from the manufacturer and the authorities, the Danish heart centres have initiated various measures to minimize the risk of infection. Additionally, the heart centres are currently conducting a study to clarify if further, currently unrecognised, cases have occurred. On suspicion of infection with M. chimaera, the patients will be contacted for further work up. The SSI is also conducting a nationwide register study.

You can read more about this outbreak and the symptoms associated with suspicion of M. chimaera at our website.

For a detailed description of the incidence, please see the 2018 annual report on invasive meningococcal disease.

The total number of MD cases has remained stable for the past four years after having followed a decreasing trend since the 1990s. The occurrence of the different serogroups shifts constantly. In 2018, group B and group W were the most frequently occurring serogroups. Having followed a decreasing trend for the past six years to record only a single case in 2017, the number of group C cases increased slightly to six in 2018. In five cases, the serogroup was unknown. Figure 1 presents MD by serogroups for the years 2006-2018. In case of PCR detection of invasive meningococci, we recommend that the DCMs submit any relevant clinical sampling material to the SSI for grouping.

The share of patients with sequelae following MD was 19%, which is fully in line with the share recorded the previous year. 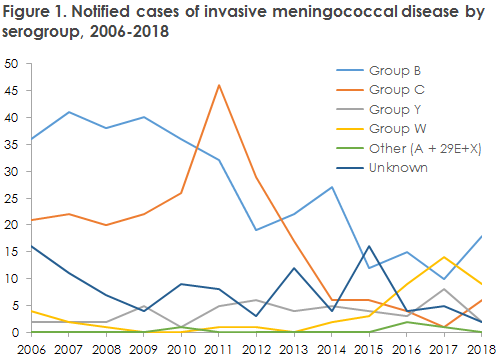 Increase in serogroup W and Y in 2019

Serogroup W decreased slightly in 2018 compared with 2017, but has once again followed an increasing trend in 2019. In 2019, there are currently more serogroup W cases than were recorded in all of 2018. The overwhelming majority of cases belong to the same clonal complex (cc11), but it is assessed that they are, nevertheless, unconnected. In England and Holland, an increase was observed in the number of serogroup cc11 cases with a novel hypervirulent subtype coined the “2013 strain”. Currently, additional detailed typing of the Danish cc11 cases is ongoing, and Statens

Serum Institut is monitoring developments. The number of serogroup Y cases decreased in 2018, but an increase was also seen here in 2019.

Prophylaxis for persons who have become exposed to meningococcal disease

Household-like contacts to patients with suspected or verified MD must be offered prophylactic antibiotics. Vaccination is offered via the Danish Patient Safety Authority following verified MD caused by group A, B, C, W or Y to the group of persons who have been offered antibiotic prophylaxis. Vaccination must be given no later than four weeks after exposure. For detailed information, please see the SSI website.