Denmark saw a total of 42 cases of leptospirosis in 2017-2018. Compared with previous years, both 2017 and 2018 witnessed an increase in the number of notified patients and in the number of laboratory-confirmed cases, Figure 1. The increase was, among others, associated with a small outbreak in connection with a swimrun event in Denmark, but the increase was also seen among persons who had become infected abroad. 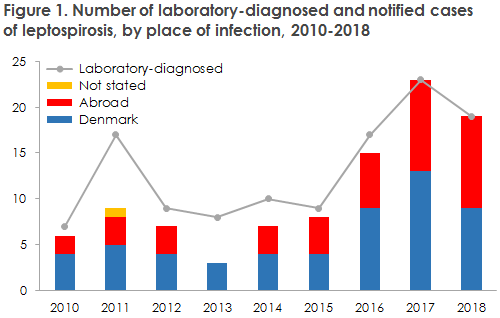 Leptospirosis is a rare but serious condition caused by infection with spirochetes from the bacterium Leptospira, which is found naturally in the urine of many mammalians. In Denmark, bacteria from rats and mice are the primary cause of the condition in humans. In the initial phase of the disease, the symptoms are often uncharacteristic and may be similar to influenza symptoms. In serious cases (Weil’s disease), pulmonary infection and organ failure occur relatively rapidly. For more information, see the four case reports described in EPI-NEWS 28-33 - 2016 .

Persons who develop influenza-like symptoms after coming into contact with rats, freshwater, sewage and waste water or water/mudd after floodings and the like should see their doctor for further work-up. In Denmark, the diagnostics  are performed at Statens Serum Institut only. Leptospirosis is an individually notifiable disease.

Leptospirosis may be treated with penicillin or other antibiotics. Optimal effect is achieved if the treatment is initiated within the initial four days of illness, see the description of leptospirosis  at the SSI website.

In humans, leptospirosis is prevented through use of protective equipment, including rubber boots and rubber gloves, covering up of any sores and scratches with water-repellant material, changing and washing of clothes (preferable at more than 80 degrees Celsius) that have come into contact with freshwater, including sewage or waste water, and bathing in clean water immediately hereafter. In limited areas with large amounts of mice, e.g., waterholes, farms, storage facilities, fish farming facilities, septic tanks, etc., regular pest control measures are important.