The 2018/19 influenza season was dominated by influenza A (H1N1)pdm09. However, towards the end of the season, influenza A (H3N2) comprised the greatest proportion of detected cases. Very few influenza B cases were observed. Even though both the number of individuals who had influenza detected with a microbiological test and the number of individuals who themselves reported influenza-like symptoms via Influmeter in one week exceeded previously measured figures, the influenza activity was at a mid-level in general compared with previous seasons, Figure 1. More vaccinations were given to all risk groups than in the previous season. The vaccination overage among elderly people aged 65 years and above increased from 50% in 2017/18 to 52% in 2018/19.

The season’s vaccines were moderately effective.

For a detailed epidemiological description of the influenza activity, please see the annual report on the 2018/2019 influenza season.

The share of patients who contacted their general practitioner with influenza-like illness was increased as from week 4, 2019, and remained elevated until Week 8, 2019, Figure 1. 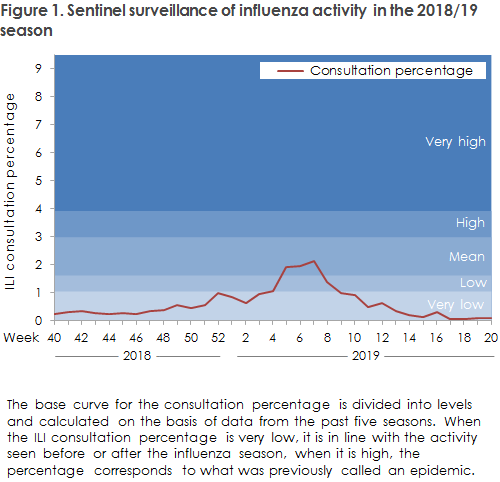 A total of 57,469 patients were tested for influenza from Week 40 in 2018 to Week 20 in 2019. In all, 11,645 hereof tested positive for influenza (20% of those tested); 11,522 for influenza A (20%) and 123 for influenza B (0.2%), Figure 2. The number of microbiology samples for influenza has increased considerable in recent years, probably owing to the growing use of influenza rapid tests at many hospital departments; hence, in the 2018/19 season, more samples were taken than in any other season since 2010. The share of positive samples was lower than in the previous season when the total share of positives was 29%. 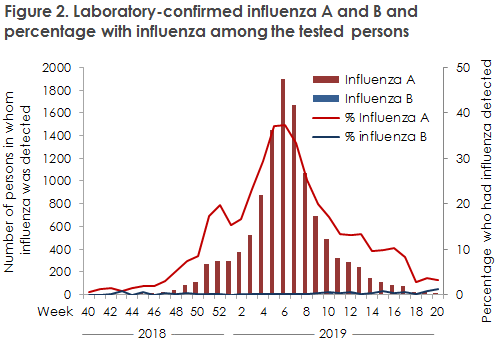 Influenza vaccination was given to a total of 762,500 risk-group citizens, and the vaccination coverage among elderly people aged 65 years or above thus increased from 50% in the 2017/18 season to 52%.

Influenza A (H1N1)pdm09 was the dominant virus this season and has been in circulation for several seasons. The Danish population therefore presumably have some level of immunity to this virus. Hence, the virus will typically affect children and younger adults who have not encountered the virus previously and do not have the same risk of running a serious course of disease as elderly people >= 65 years of age. In this season, it was not possible for the SSI to calculate the overall number of influenza-related admissions due to changes made in the National Patient Registry, but we expect that this season may have brought fewer admissions than the previous season, when the number of admissions was record high. This year’s influenza vaccines were effective against influenza A (H1N1)pdm09, but not against influenza A (H3N2) as the latter virus had changed. In this season, vaccination halved the risk of having influenza A (H1N1)pdm09, and it is encouraging that the vaccination coverage among elderly people rose by 2 percentage points to 52%. Despite the fact that the vaccine effectiveness is often lower than that of vaccines against other diseases, vaccination remains the best available prevention against influenza. Even at a low effectiveness level, vaccination prevents both hospitalisations and deaths. Furthermore, the disease often runs a less serious course if you do fall ill in spite of being vaccinated . The WHO recommends that 75% of the elderly >= 65 years of age should be vaccinated. Thus, we are far from reaching this goal.

As in previous years, this year registered a record-high number of patients who were tested for influenza, but the overall positive percentage was lower in this season than in the 2017/18 season, which was characterised by massive spread of influenza. More and more hospital departments have introduced the so-called rapid tests or point of care tests. This means that access to influenza test results at Danish hospital departments is now quicker and less complicated. This is positive as the diagnosis and, if needed, isolation of the patient can be achieved more rapidly. It does, however, also affect the interpretation of parts of the influenza surveillance that are based on the linking of positive influenza samples to admission data. This is particularly the case if the indication for testing changes, as testing becomes more readily available. Statens Serum Institut and the departments of clinical microbiology are investigating the impact of the rising number of tests on surveillance in general in order to address this issue.

For the offer to come into force, a decision is required that will be implemented via an executive order from the upcoming Danish government and pending agreement on the fee to be signed by the General Practitioner’s Association and the Regional Wages and Fees Committee. Further information about this will be provided towards the end of July.

Since 2017, the Danish Health Authority, the Danish Cancer Society and the Danish Medical Association have had an information campaign about HPV vaccination in place. The campaign has been updated with the title “Stop HPV - get vaccinated” and now also includes information to boys and parents of boys who can read more at: www.stophpv.dk and ask any questions they may have at the campaign Facebook page.

Leaflets and posters for handing out to parents in general practice have been printed. and will be distributed to GPs along with vaccine deliverances from Statens Serum Institut. Anyone interested may already order the materials free of charge via the website of the Danish Cancer Society.