Screening of pregnant women for hepatitis B, HIV and syphilis, 2018

Screening of pregnant women for hepatitis B, HIV and syphilis, 2018

General screening of pregnant women for hepatitis B (HBV) was introduced on 1 November 2005, and screening for HIV and syphilis was initiated by 1 January 2010.

The 2018 annual report is now available.

The general practitioner's tasks in relation to pregnancy screening are presented in Table 1. 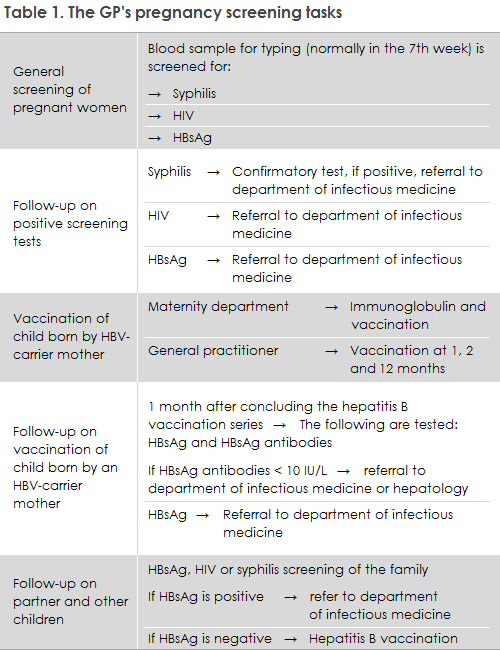 The vast majority of pregnant women thus accept the hepatitis B, HIV and syphilis screening offer.

The general screening of pregnant women may still be considered a success. Nearly all cases of mother-to-child transmission are prevented in Denmark, and pregnant women who were unaware that they had become infected have the opportunity to be tested and treated. However, only those pregnant women who are examined by a physician during their pregnancy can make use of this offer.

Pregnant women who stay in the country as undocumented immigrants may be examined by a physician at a Red Cross health clinic in Copenhagen or Aarhus. Here, pregnancy screening is also offered, but this service does not form part of the public offer of care for childbearing women. If a woman in labour of unknown status arrives at a maternity ward, the ward shall perform tests for syphilis, hepatitis B and a rapid HIV test.

In 2018, 12 out of 21 pregnant women with syphilis were of Danish origin. This shows that, in Denmark, syphilis is not exclusively a condition that occurs among homosexual men or immigrants from high-incidence countries; it has been re-introduced among heterosexual Danes. What is seemingly a doubling of the number of confirmed syphilis cases among pregnant women (10 cases were recorded in 2017) may, however, be random variation as the numbers are very small.

As the syphilis screening tests made among pregnant women produce many false positive test results, a full serological testing (confirmatory test) is required of anyone who tests positive in the screening. In 2018, one woman did not have the confirmatory test performed despite several requests from Statens Serum Institut (SSI) to do so. It remains unknown if this was a false-positive screening sample, of if it was a real positive, and the woman may therefore have infected her child with syphilis.

It is important that treating physicians refer any pregnant women who have been diagnosed with one of the three infections in the screening to the relevant specialist departments, even if the woman in question has no symptoms of infection, Table 1. Pregnant women with a high HBV virus amount (>106 IU/ml) may typically be offered treatment at approx. 28 weeks of gestation, which may reduce the risk of intrauterine transmission, cf. guidelines on the treatment of hepatitis, prepared by Danish Society for Gastroenterology and Hepatology (in Danish language)

In accordance with the Danish Health Authority's guideline on general screening of pregnant women for infection with hepatitis B, HIV and syphilis, the pregnant woman's partner and remaining children should be scheduled for a blood sample.

According to the Danish Health Authority’s guideline on HIV, hepatitis B and C virus published in 2013, all children born by HBV carrier mothers who receive hepatitis B vaccination at birth and subsequently at the GP should be tested to confirm that the vaccination has taken and to test for current infection one month after the vaccination series has been concluded, i.e. when the child is 13-15 months old. This is because inter-uterine infection occurs in some children, in which case the vaccine is ineffective. The responsibility for performing this test lies with the GP. If the child has become infected or is insufficiently protected despite the vaccinations, the child is referred to a specialist department. The SSI sends out reminders to the GPs about hepatitis B vaccination of children born by hepatitis B-carrier mothers, and about subsequent testing of these children.

The SSI is currently evaluating the reminder system for children born in the 2016-2017 period. A preliminary report shows that nearly half of the children were tested and it was established that the vaccine had taken, and that in approx. 5% the vaccination was lacking and no information about the effect of the vaccine was presently available. For the rest of the children (nearly half), the GPs have not answered the questionnaire sent to them, and it therefore remains unknown if these children are covered by the vaccines or not. The evaluation will be described in EPI-NEWS once the final results are ready, but it may already now be concluded that the doctors do not participate as much as desired in the monitoring of the effect of hepatitis B vaccination among children of carrier mothers.

It has also been shown that children who are vaccinated against hepatitis B at birth are often not registered in the DVR (The Danish Vaccination Register) despite the fact that doctors, nurses and midwives who administer the vaccine have a duty to notify. In addition to the fact that the vaccinee cannot see that he or she has been vaccinated when the vaccination has not been registered in the DVR, a vaccination course can also not be established in the DVR. When a vaccination course is established, the parents as well as the child and the GP will automatically gain access to the time at which the next vaccination is to be given. Therefore, the Department of Infectious Disease Epidemiology and Prevention has decided to register the vaccination on behalf of the place of birth if the place of birth has not registered the vaccine in the DVR. This, however, is not possible in cases in which the place of birth has failed to fill in the form about immunisation of the neonate, which may be forwarded electronically to the SSI. Presently, 2019 has recorded 56 children of hepatitis B positive mothers at Danish labour wards. The SSI has only received an immunisation form for 37 of these cases.