Statens Serum Institut is currently investigating a disease outbreak with gastrointestinal infections with Yersinia enterocolitica. The outbreak currently counts 18 persons in Denmark, and cases with the same bacterial strain have also been observed in Sweden. The source of infection currently remains unknown. Danish doctors should remain attentive to the fact that the infection often presents with intense abdominal pain, which may be mistaken for appendicitis.

For more information about the outbreak, please see the SSI website.

A full annual report on Shiga toxin-producing Escherichia coli (STEC, previously VTEC) is available for the 2014-2018 period at the SSI website.

STEC is transmitted from foods, water, the environment, directly from ruminants and via person-to-person infection. 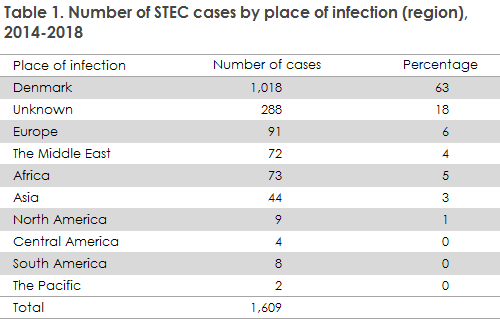 STEC can cause outbreaks, most frequentluy counting only a limited number of cases. 2018 recorded the largest Danish outbreak registered to date, counting 38 cases with a non-HUS-inducing O26 strain. The cases primarily occurred among children below four years of age (link til udbrudssiden). The outbreak was likely associated with ingestion of beef salami.

In contrast to other pathogenic intestinal bacteria, like Salmonella or Campylobacter, the number of bacterial intestinal infections due to STEC has followed an increasing trend in the period (see “Numbers and Figures” at SSI.dk. Part of the explanation may be that the diagnostic methods and clinical criteria for STEC testing have changed at several departments of microbiology in the 2014-2018 period. Thus, more people are tested and diagnosed than previously. The previous guidelines on STEC diagnosis were primarily aimed at children below seven years of age and patients with sanguinolent diarrhoea. Following increasing diagnostics in patients aged more than seven years and with all forms of diarrhoea, we were not surprised to observe a relative increase in the share of patients aged more than seven years and a relative decline in the number of patients aged below seven years. 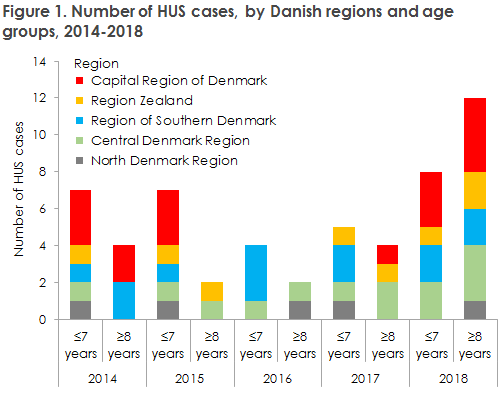 In the course of 2018, the SSI has repeatedly informed Danish departments of clinical microbiology, the Danish Patient Safety Authority and paediatricians at three large hospitals of the increase in the number of recorded HUS cases. It remains unknown whether this has generated an enhanced awareness, thereby producing a more complete notification. Only a single cluster was seen, counting two HUS cases that formed part of a larger outbreak with STEC O111; apart from this, there was no genetic relation between the bacteria found in the HUS patients, i.e. the cases were sporadic. It is to early to say if the number of HUS cases recorded in 2018 forms part of a larger annual trend or not.

The changes in the number of STEC infections and HUS cases are followed closely through ongoing monitoring which among other activities includes a case-control study being conducted at the SSI to reveal risk factors of infection. 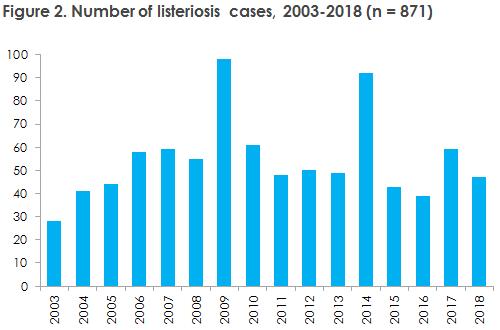 This is reflected in the figures summarising the 2014-2018 period, when 94% of the nearly 50 annual cases had an underlying predisposing condition or were pregnant, and 75% were older than 65 years of age. As previously, bacteraemia/sepsis was the most frequent manifestation of listeriosis, followed by meningitis. One in every four notified listeriosis patient died within 30 days from the diagnosis was made. Infection by L. monocytogenes in pregnant women is rare, but can be serious, as an infected pregnant woman may transmit the infection to the foetus - even without having symptoms herself. A total of 12 infections with L. monocytogenes were recorded in pregnant women from 2014-2018, among which at least eight infections caused abortion or foetal death.

The SSI collaborates closely with the Danish Veterinary and Food Administration and DTU Food to solve outbreaks and avoid that more people become infected by the same products.

The epidemiologic part of the outbreak investigation, handled by the Department of Infectious Disease Epidemiology and Prevention at the SSI, is hampered by:

To counter these challenges, the SSI initiated a project that enhanced the epidemiological monitoring of listeriosis in 2014. All patients are contacted for an interview on exposures in the month leading up to their listeriosis. As information is collected routinely rather than retrospectively after an outbreak has been detected, these interviews help ensure reliable information about possible sources of infection. The information is continuously used to identify or verify possible outbreak sources.

Since the introduction of routine whole-genome sequencing of L. monocytogenes isolates and enhanced epidemiologic surveillance in 2014, the SSI, collaborating with the Danish Veterinary and Food Authority and DTU Food, has detected, handled and solved a total of 15 outbreaks. This compares to the period from 2006-2013 in which a total of three confirmed outbreaks were registered in the Danish Food- and waterborne Outbreak Database (FUD).

Despite enhanced outbreak identification, nearly 50 cases of listeriosis are registered annually. That is more cases than seen in most other European countries, taking into account the size and age distribution of the Danish population. Slightly more than half of the recorded cases were infected by a L. monocytogenes that had either been observed previously or subsequently was observed in other patients; the majority of these cases formed part of one of the 15 known foodborne outbreaks. This underscores the importance of having a good collaboration with the departments of clinical microbiology, ensuring rapid submission of isolates, and with the hospital departments and patients to ensure information about food exposures.

The Danish Veterinary and Food Administration has published guidelines to avoid listeriosis during pregnancy, or for those with serious illness or immunodeficiency.