A total of 1,023 cases of whooping cough were detected in 2018. The incidence was highest on Funen, in North Zealand and in Copenhagen subs., which was also the case in 2017. The lowest incidence was observed in North Jutland.

For a detailed epidemiological description of the 2018 incidence, please see the 2018 annual report on laboratory-confirmed whooping cough.

The whooping cough level in 2018 was in line with the level recorded before and after the 2016 epidemic. But when studying the figures in detail, it becomes clear that the number of samples has increased and, concurrently, the share of positive findings has declined. In particular, the number of adult samples has increased considerably and in the 30+ age group, 2018 recorded a total of 5,647 samples compared with 3,859 in 2015, corresponding to a 46% increase. The increased number of tested samples indicates an increased population awareness about whooping cough following the 2016 epidemic, and particularly about the risk of whooping cough in all age groups and not just among children.

The highest whooping cough incidence in 2018 was recorded in the months of August-September and November-December, Figure 1. 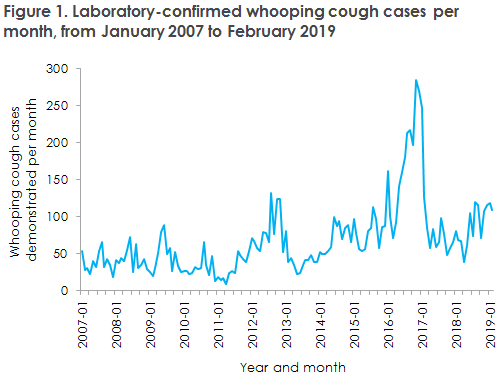 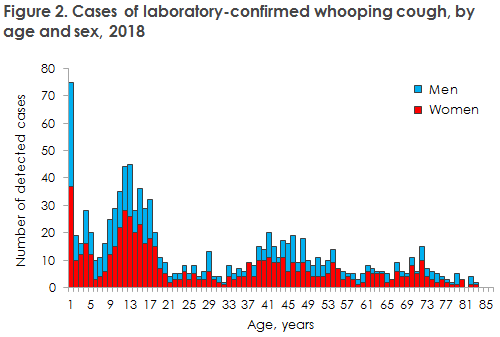 A clear decrease is observed in the number of cases among 5-6-year-olds, illustrating the effect of the 5-year vaccination. The peak among larger school-aged children aged 10-16 years reflects that the immunity following full basic vaccination against whooping cough is estimated to last only 4-12 years, that the focus on whooping cough is generally strong among children, and the infection pressure is higher among children than among adults. The observed peak among adults aged 35-55 years probably reflects a combination of infection within families with children and an increased focus on testing of parents to children who are suspected of having whooping cough.

For a detailed epidemiological description of the 2018 occurrence, please see the annual report on laboratory-confirmed whooping cough in children below the age of 2 years.

Among the 104 notified children below 2 years of age, 43 (41%) were unvaccinated, whereas 15 (14%) had received all three primary whooping cough vaccinations. 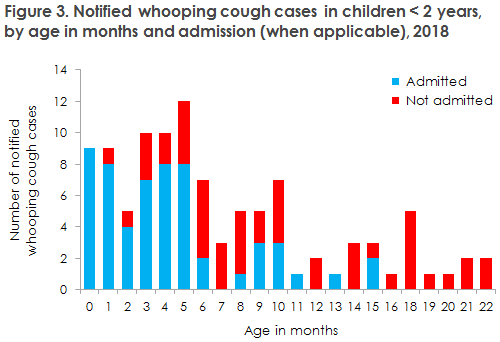 No whooping cough-related deaths were recorded among children below 2 years of age in 2018.

On three of the notifications, it was stated that the lacking childhood vaccination was due to conscious opt-out.

Whooping cough is a highly infectious bacterial infection that causes severe coughing spells, which in small children are characterised by a whooping sound when the child breathes in after the coughing spell. Whooping cough vaccination forms part of the vaccination programme at 3, 5 and 12 months of age and at 5 years of age. The aim of the vaccinations is primarily to protect infants against the infection that may run a serious course and which is occasionally life-threatening in this age group. Antibiotics can reduce the risk of infection, but will only rarely have an effect on the course of the disease, which may persist for as long as three months. Whooping cough in older children and adults can run a protracted and exhausting course, but the infection is normally not serious. The cough is typically without the characteristic whooping sound, and the infection therefore probably remains underdiagnosed in adults.

Immunity following whooping cough vaccination or whooping cough disease lasts only for 4-12 years. Thus, the majority of the population is susceptible to whooping cough. A number of other countries have introduced booster vaccinations for teenagers. In contrast hereto, the Danish vaccination programme primarily aims to protect young children against whooping cough, as the disease can run a serious course in this age group. As infants do not receive relevant antibodies from their mother (unless the mother is vaccinated late in pregnancy), it is important to ensure that the two initial vaccinations given at 3 and 5 months of age, in particular, are administered without unnecessary delay. In line herewith, the Danish Health Authority in 2018 assessed that the primary efforts to increase whooping cough control in infants should be based on avoiding unnecessary delay in the vaccination programme. In the summer of 2019, the childhood vaccination reminder system will be extended to also include reminders sent out before the next planned vaccination.