TBE detected on Funen and in Jutland in 2018

TBE detected on Funen and in Jutland in 2018

For the second time, infection with tick-borne encephalitis (TBE), also known as Central European Encephalitis, has been detected in other Danish areas than Bornholm. For many years, the island of Bornholm was the only known risk area in Denmark. In 2008/9, TBE was detected in two persons who had become infected in Tokkekøb Hegn, EPI-NEWS 35/09, but this micro focus seems no longer to exist, EPI-NEWS 40/17.

In 2018, a 39-year-old woman became infected with TBE virus (TBEV) from ticks in the area surrounding the town of Faaborg. We are almost sure that she became infected in that area, because she had not travelled abroad or visited Bornholm in the period leading up to symptom onset. The woman presented with symptoms of encephalitis. Additionally, a 65-year-old woman probably also became infected in Denmark during a camping holiday in Central and South Jutland. The precise place of infection in Jutland remains unknown. The woman had symptoms of meningo-radiculitis.

Serological testing of deer in the affected areas has previously detected neutralising TBEV antibodies as a sign that the virus is present in the area, but no human case has previously been detected.

The new findings trigger no change in the current TBE vaccination recommendations, which continue to apply to only Bornholm, where TBE is endemic.

This occurs following a symptom-free interval lasting from few days to three weeks. Even so, the infection in most cases goes un-noticed, or it may present as CNS symptoms. Around 1/3 of all hospitalised TBE patients may expect to experience prolonged mental or neurological sequelae of varying severity; in children these may include learning disabilities.

TBE is caused by a flavivirus (TBE virus, TBEV) and is transmitted within minutes after a tick bite. Furthermore, cases have been reported in which infection was transmitted through unpasteurised dairy products, typically from goats. The main virus hosts are small rodents, but virus may also be detected in and transported by foxes, deer and migrating birds. Woods or meadows with a dense undergrowth and shrubs are associated with a greater risk of infection. TBE is seen mainly in persons who frequently spend time in woods or shrubland beyond existing paths, and more rarely among people who only occasionally spend time in nature in endemic areas. The tick season peaks from May to October. Ticks start seeking blood meals when temperatures rise to around 5 °C.

A search in the Danish Microbiology Database (the MiBa) suggests that TBE is diagnosed at Statens Serum (SSI) Institut only. At the SSI, the condition is typically diagnosed serologically by detection of specific antibodies in the blood using ELISA. Elevated IgM titres tentatively indicate ongoing or recently surpassed infection. Seroconversion with a 4-fold IgG titre increase from the initial to the second test underpins the diagnosis. The first blood sample should be taken as early as possible in the course of the disease; the second should be taken 1-2 weeks later. It is important to keep in mind that antibodies against other flaviviruses (Dengue virus or vaccination against Japanese encephalitis and yellow fever) may cross-react, in part, with TBEV. Specific IgM antibodies may also be detected in spinal fluids and are diagnostic.  Direct TBEV detection by PCR in spinal fluids is also diagnostic, but as TBEV is typically found in the cells and only briefly as free virus, the chance of detecting virus through a single spinal fluid sample is limited.

Despite the two cases outside of Bornholm, in Denmark TBE virus is currently endemic only on Bornholm. As opposed to the widespread borrelia bacterium, TBEV in ticks is typically seen in small, delimited areas (micro-foci) that are difficult to pinpoint.

In 2008 and 2009, two cases of TBE were detected in a small area around Tokkekøb Hegn north of Copenhagen, and TBEV has subsequently been detected in ticks in this micro focus in 2009, 2010 and 2011. The virus found in Tokkekøb Hegn was genetically more closely related to TBEV from Sweden and Norway and may therefore have entered Denmark with ticks lodged in migrating birds. Subsequently, no further clinical cases from the area have been reported, and a new study of ticks collected from the area in the 2016-17 season failed to establish the continued presence of virus in the ticks, EPI-NEWS 40/17.

The two most recent patients had become infected in Denmark, in the Faaborg area and in a currently not further specified area in Central or South Jutland, as described above. Whether new TBEV micro-foci have been established and for how long remains unknown, but this will be studied in the 2019 season through so-called tick flagging. 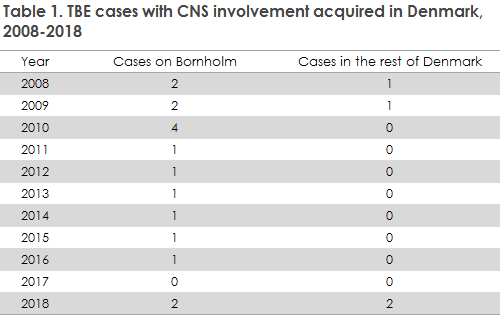 The risk of TBE is higher if you frequently spend time in woods or shrubland beyond existing paths, where TBEV is present. The risk of tick bites can be reduced by using boots, long trousers and frequent inspections with quick removal of the ticks. In contrast to Borrelia transmission, in which the risk of infection is reduced by removing the tick within 24 hours, transfer of the TBE virus probably occurs immediately on biting as the virus is present in the tick’s salivary glands. Even so, it is important to remove the tick as soon as possible, as the amount of virus transmitted is associated with symptom severity.

Vaccination may be considered in persons who are living permanently or have a fixed summer residence in TBE areas like Bornholm and who regularly leave the paths of woods and scrubland. In endemic areas, vaccination may be considered in cases with behaviour associated with a particularly large risk of infection, such as forestry work, hunting, or where the woods are the fixed location for play, sport or hobby activities.

Currently, the SSI stocks two TBE vaccines: TicoVac® 0.5 ml for persons above 16 years of age and TicoVac® Junior 0.25 ml for children from 1 to 16 years of age. Initially, two doses are given at a recommended interval of 1-3 months. In cases where there is a need to achieve a rapid immune response, the second dose may be given already two weeks after the first dose. The third dose is a booster, which should be given 5-12 months after the second vaccination. The booster protects the patient for a period of three years. To achieve immunity before the tick season starts, the first and second dose should preferably be given during the winter months and the third dose before the next season starts. Subsequent boosters should be given at 3-5-year intervals, see the summary of product characteristics at www.ssi.dk (in Danish).

In recent years, several of our neighbouring countries (e.g., Sweden and Germany) have reported an increase in TBE incidence, so far peaking in 2018, and the condition has also spread geographically. The recent detection of TBE infection in Danish areas beyond the island of Bornholm is therefore not unexpected. Several factors may be contributing to the observed changes in TBE epidemiology, including an increasing number of deer and changed behaviour in animals as well as people. Additionally, the 2018 climate was particularly favourable for ticks (and mosquitoes) in Denmark and the rest of Europe, which is also reflected in the number of reported cases of tick-transmitted Borrelia infections and mosquito-transmitted TBE-related flaviviruses like West Nile virus and Usutu virus in South Europe and as northerly as in Germany. TBEV always occurs very locally, and follow-up efforts to trace TBEV micro-foci are therefore important.

The two Danish TBE cases detected in 2018 that were not related to either Bornholm or the exterior will not trigger any changes in current Danish TBE vaccination recommendations, which only include Bornholm, where TBE is endemic. Even so, doctors, particularly in southern and south-western parts of Denmark, should be attentive to TBE as a possible diagnosis in case of relevant symptoms.

Accept of cookies - SSI uses cookies for statistics and to improve the user experience. If you continue to use our website, we will assume that you agree to the use of such cookies.
Find out more about cookies and how you can refuse them.