Rabies 2016 and 2017 and new recommendations for rabies prophylaxis

Rabies 2016 and 2017 and new recommendations for rabies prophylaxis

In Denmark, being bitten by a bat is normally the only indication for prophylactic treatment against rabies. If, after being bitten by another animal, there is reason to suspect that the animal has rabies, the animal should be examined by a veterinary. The veterinary will destroy the animal, if necessary, and will arrange for further investigation for rabies.

In other parts of the world, rabies is more widespread. Transmission occurs through the penetrating bite of an animal that may have become infected with rabies or, on rare occasions, through direct contact between infected saliva and mucous membranes or wounds.

On 1 December 2017, the WHO published new guidelines in a report from the Strategic Advisory Group of Experts on Immunization (SAGE). The guidelines are based on current evidence on the use of rabies vaccines and human rabies immunoglobulin (HRIG). These guidelines form the basis for the updated Danish recommendations. Rabies: Risk assessment and recommendations for vaccination before and after exposure to possible infection.

PEP consists of thorough wound care, vaccination and (in some cases) HRIG.

People who have received adequate pre-exposure prophylaxis (PrEP) (i.e. two vaccinations at a minimum 7-day interval), must receive two vaccinations (on day 0 and day 3 after their exposure) in case of possible rabies exposure. HRIG is not given.

People who have received only one vaccination (PrEP or PEP) are considered to be unvaccinated and are given four vaccines and HRIG.
Immunosuppressed people with possible rabies exposure receive full PEP therapy, including HRIG. This recommendation, however, does not apply to well-treated HIV-positive patients with a DCD4 count exceeding 200 cells/microlitre.

HRIG is indicated in the following situations:

The maximum applicable dose of HRIG is calculated based on the patient’s body weight, and is 20 IE/kg body weight. As HRIG is given as an injection into/close to the bite wound, the dose calculated cannot be administered if the bite is in a finger, an ear, etc.

Any remaining HRIG that cannot be injected into the wound is not injected elsewhere in the body as this will have no additional effect. However, if it is not possible to inject HRIG at the site in question (e.g. in case of saliva in an eye), HRIG is injected into a muscle as close to the exposed area as possible.

The clinician will assess how much can be injected into/around the wound, and the epidemiologist on call ensures that the desired quantity is forwarded.

HRIG is given once to unvaccinated persons concurrently with the initial vaccination, regardless of the interval that has passed since exposure.

A total of two intramuscular vaccinations are given: one dose on day 0 and day 7, respectively. People who have received only one vaccination are recommended to have the second vaccination as quickly as possible before any possible exposure. The vaccination schedule is not restarted.

Immunosuppressed people are given a total of three PrEP vaccinations (intramuscularly): on day 0, day 7 and in the interval from day 21 to day 28.

Dispensing of rabies vaccines and HRIG in the on-call period

Doctors may order PEP treatment from Statens Serum Institut during daily working hours after consulting with the on-call physician at the Department of Infectious Disease Epidemiology and Prevention (phone: +45 3268 3038). Costs are covered by the Region.
Outside of working hours, dispensing is only in case of exposure:

Apart from acute dispensing, PEP can be planned so that in most cases it may be given by the GP. If the epidemiologist on call assesses that PEP needs to be initiated acutely, the first vaccine/HRIG may have to be administered at an infectious medicine department or an emergency room. Subsequently, the GP can typically administer the following vaccinations.

Post exposure prophylaxis (PEP) given to Danes in 2016 and 2017
In 2016 and 2017, a total of 176 and 215 persons received prophylactic rabies treatment after having been bitten by animals suspected of having rabies. Among these, a total of six and four persons had received PrEP.

In 2016 and 2017, 10 and 13 persons, respectively, received prophylactic treatment because of bat bites. In 2017, only one bat was submitted for testing for bat rabies virus, European Bat Lyssa Virus (EBLV).

In 2016, one person from Denmark was bitten by an illegally imported dog from Eastern Europe. As the patient had previously received pre-exposure vaccination, and as the dog could not be located, the person was given two post-exposure rabies vaccines.

Additionally, two persons were bitten by a cat and a badger-like animal, respectively, but their treatment was discontinued as it was assessed that they had not been exposed to any risk.

In 2017, two persons who had both received pre-exposure vaccination were bitten by dogs. One of the dogs had been imported from Eastern Europe; it subsequently tested negative for rabies. The other dog had been imported legally and was quarantined. In addition, five people (from two families) were bitten by two cats; both cats subsequently tested negative and treatment was discontinued. 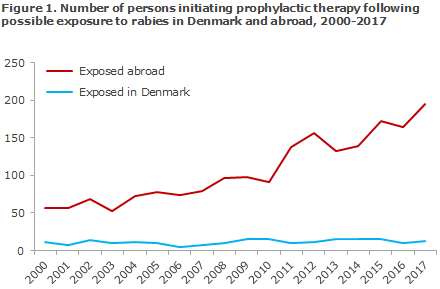 A total of 165 and 195 Danes were possibly exposed to rabies abroad in 2016 and 2017, respectively, Figure 1. Figure 1 shows that the 2000-2017 period, and particularly the period from 2010 onwards, has seen a considerable increase in the number of persons who had possibly become exposed abroad, whereas no increase was observed in the number of persons possibly exposed in Denmark.

Furthermore, a total of 47 and 44 persons, corresponding to 28% and 23%, respectively, were not vaccinated until returning to Denmark.
Table 1 shows how many persons received HRIG and the first vaccine, respectively, in Denmark and abroad. 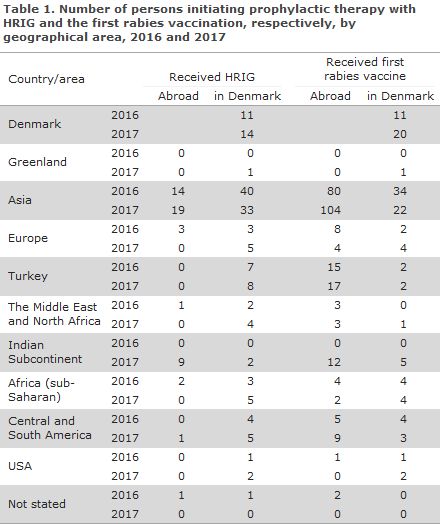 In case of bat bites in Denmark, the bat should be caught, if possible, and submitted for rabies testing at the National Veterinary Institute, Technical University of Denmark, by agreement with the Regional Food Inspectorate. It is important to follow the occurrence of rabies in Danish bats. The prevalence of rabies among bats in Denmark remains unknown as only few bats are tested. If a bat tests negative, the vaccination series is terminated.

Possible exposure to rabies abroad has doubled since 2010 and is, by far, the primary cause of post-exposure prophylaxis in Denmark; this applied to 165 and 195 (94% and 91%) of all treated persons in 2016 and 2017, respectively. In 2016 and 2017, respectively, six and four of the exposed persons had received pre-exposure rabies vaccination and therefore only needed 2 post-exposure vaccines.

When giving advice prior to foreign travel, it is important to mention the risk of rabies associated with contact to animals. Travelers should be advised to limit contact to animals and to see a physician without delay in case of a bite.

Recommendation of pre-exposure vaccination against rabies may be considered even in connection with short journeys to rabies-endemic countries. Such vaccination is particularly relevant if the nature of the journey will make it difficult to obtain medical treatment within few days. It is also important to inform travelers that HRIG treatment is unavailable in many parts of the world.

Nevertheless, illegal import of pets from Third-World countries to Europe continues to pose a problem; and cases of rabies are now and then reported in dogs and cats imported from North Africa to Southern Europe.

Classic rabies has not been observed in Denmark since 1982, while bat rabies, which is considered endemic, was detected for the first time in 1985. The latest case of bat rabies was detected in a bat in 2009. 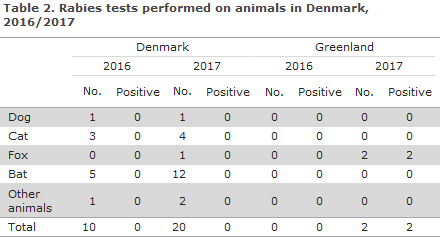