For a detailed description of the incidence, please see the 2017 annual report on invasive meningococcal disease.

The total number of MD cases has remained stable the past three years after having followed a decreasing trend since the 1990s. The relative occurrence of the different groups shifts over time . Group B has been the most frequently occurring group, apart from 2011 and 2012 when an increase was observed in the number of group C cases; but in 2017, the group W occurrence exceeded the group B occurrence for the first time ever. Figure 1 presents MD by groups for the 2005-2017 period. 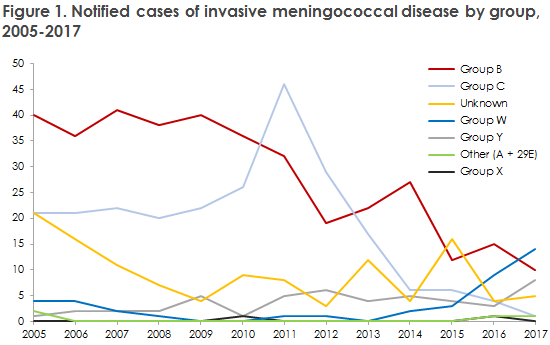 The 14 cases of W were scattered across Denmark and are believed to have been sporadic, i.e., independent of each other. An isolate allowing for genotyping was available for 12 cases. They all belonged to the same clonal complex (cc11). This clonal complex has spread in several countries and comprised 88% of group W in England in the 2010-2016 period, and 55% in Holland in the 2008-2016 period. Furthermore, an increase was observed in Sweden and Norway where group W and Y were the most frequently occurring groups in 2017. Disease caused by group W clonal complex cc11 may present with an atypical clinical picture, in Danish: EPI-NYT 49/17. Currently, 2018 has seen 8 cases of MD caused by group W, which suggests that the occurrence will decline in 2018 compared with 2017.

A total of eight group Y cases were recorded in 2017, which constitutes a slight increase from previous years when 2-6 cases were recorded. An isolate allowing for genotyping was available for all eight cases. One isolate belonged to cc92, another to cc167 and the remaining six to cc23. An increase of MD caused by MD of group Y cc23 was recorded, in Sweden mainly, but also in Norway. In Sweden, group Y cc23 was the most frequent MD cause in 2011-2016, and it is more common among elderly people. A similar age distribution was also seen in the present report, where 7 of 8 patients were more than 55 years old. The occurrence of group Y will also likely decline in 2018, as only one case has currently been reported.

MD occurrence is at a stable, low level. However, a relative increase was seen in the meningococcal groups W and Y, but preliminary monitoring numbers indicate that this year, i.e. 2018, will see a decline compared with 2017.

Household-like contacts to patients with suspected or verified MD must be offered prophylactic antibiotics. Vaccination is offered via the Danish Patient Safety Authority following verified MD caused by group A, B, C, W or Y to the group of persons who have been offered antibiotic prophylaxis. Vaccination must be given no later than four weeks after exposure. For detailed information, please see the SSI website.

For a detailed description of the incidence, please see the 2017 annual report on purulent meningitis.

Meningococcal meningitis (11 cases) in 2017 is described above in this issue of EPI-NEWS and in the 2017 annual report on meningococcal disease. 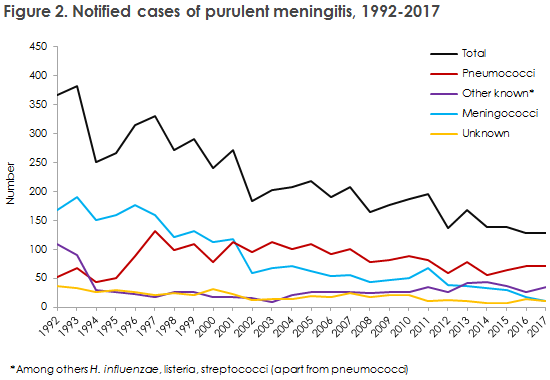 The number of cases of purulent meningitis in 2017 was in line with that recorded in the five preceding years.

A total of 72 cases of pneumococcal meningitis were recorded, including 63 notified cases. This number is lower than the approx. 100 cases seen in the 2000-2007 period, i.e. prior to the introduction of the conjugate pneumococcal vaccine into the childhood vaccination programme, but adds to the slight increase seen since 2014 when 55 cases were recorded.

Among all cases of pneumococcal meningitis, 12 were caused by serotypes that form part of the 13-valent conjugate pneumococcal vaccine that has been part of the childhood vaccination programme since 2010. Even so, 11 of the patients were so young that they had not yet been offered the vaccine under the childhood vaccination programme. All were unvaccinated, apart from one adult (serotype 3) who had been vaccinated with the 13-valent conjugate pneumococcal vaccine 17 days prior to disease onset, and one adult (serotype 19F) who had been vaccinated with both Prevenar13 and Pneumovax prior to falling ill.

Meningitis caused by H. influenzae increased from three cases in 2016 to 14 in 2017, which is the highest number recorded since registration was initiated in 1994. Only three cases, including two children, were of type B, which is covered by the childhood vaccination programme. Both children had been vaccinated according to their age as is stated in the programme, and had received two and three vaccines, respectively.

The number of purulent meningitis cases of unknown aetiology was in line with the level recorded the past six years.

The number of meningitis cases caused by listeria in 2017 (five) was on a par with the number observed in 2010, whereas the years in-between recorded a higher number of cases (8-20).

This weekend, the SSI launched a new website (www.ssi.dk) with a totally novel design, optimised for mobile devices. The structure and contents of the website have also been improved, i.e. by adding a “guide” that gives the reader rapid access to related contents within a number of categories, e.g. News, Research and Diagnostics.