For a detailed epidemiological description of the 2017 incidence, please see the 2017 annual report on Legionnaires’ disease.

The majority, 210 cases, were notified as presumably infected in Denmark. The highest disease incidence was observed on the island of Funen and in East Jutland. In the vast majority of these patients, it is likely that infection occurred at the patient’s own home, whereas 19 patients were probably or definitely infected at hospitals and nine in nursing homes.

In 28 community-acquired cases, environmental samples were tested, of which Legionella was cultured from 27 of the sites tested, and in 13 of the cases, the legionella types found in the patient matched those of the water supply in the patient’s own home. In another seven cases (two nursing homes and five hospital departments), the legionella type found in patient samples matched the type in water samples.

A total of 68 patients were probably infected during travels abroad; none of whom died due to LD. In all, infection was recorded in connection with travels to 22 countries, among which Italy, Spain and Thailand and Greece were the most frequently seen travel destinations in 2017. 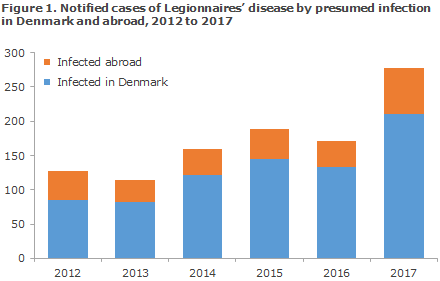 The incidence varied considerably from one part of Denmark to the next. Even so, there is no indication that the high number of cases recorded, e.g. on Funen and in East Jutland, are due to LD clusters or outbreaks.

Despite the considerable increase in culture-verified LD compared with previous years, the serogroup distribution is similar to the distributions seen in previous years. Thus, the increase in the number of cases is not caused by a higher share of the most infectious serogroup (serogroup 1, subgroup Pontiac), which only comprised 39% of all isolates, which is approx. the same share as was detected in 2015 and 2016. In contrast, far more different sequence types were detected in 2017 than in 2016. In other words, the legionella population that caused LD in Denmark in 2017 was very diverse.

Based on epidemiological investigation and typing results, all cases acquired in Denmark in 2017 are considered sporadic. It is assumed that the most frequent source of infection was the patients’ own water supply. Increases were seen in the number of cases observed in the main categories: 1) travel-associated abroad 2) community acquired Denmark and 3) health-care associated. Thus, in 2017 all of these categories have seen the highest number of cases recorded so far, but the proportions of cases on each category has remained largely unchanged. This may indicate that an increase in diagnostic activity was one of the causes contributing to the increase in the number of recorded cases. Even so, data extracted from the Danish Microbiology Database (MiBa) show no sign of a marked increase in the number of patients tested or any laboratory methods in the past three years. So far, 2018 has recorded a marked decline in the number of cases compared with 2017, but the number remains at a high level and 2018 will also record more than 200 cases.

Furthermore, the Danish increase in the number of cases coincides with a marked increase recorded in the rest of Europe in 2017 (30% increase compared with 2016). Hence the Danish increase was probably not caused by local conditions exclusively, but seems to be driven by currently unknown “global” factors.

Even so, the uneven distribution across Denmark seems to indicate that local (and unknown) Danish conditions also play a role. For that reason, two working groups were established in 2018 in the Danish Transport, Construction and Housing Authority and in the Danish Health Authority, respectively. The working groups aim to establish the possible causes for the increase and to identify how it may be curbed, i.e. through the introduction of new provisions or initiatives in the field. Furthermore, several studies are being conducted at Statens Serum Institut to identify special Danish factors that may help explain the increase in the number of Danish LD cases.