Coverage was calculated using data from the Danish Vaccination Register obtained on 2 October 2018.

The coverage of the PCV vaccines in the childhood vaccination programme for birth cohorts 2007-2017 was in the range 87-96% for the first PCV, 82-95% for the second PCV, and for 2007-2016 the coverage was 69-95% for the third PCV, Table 1. Modest geographical variation was observed, including a slightly lower coverage, e.g. for birth cohorts 2016 and 2017 for the third PCV in the City of Copenhagen (i.e. in the municipalities of Copenhagen, Frederiksberg, Tårnby and Dragør) compared with the remaining parts of the country, www.ssi.dk/data.

Invasive pneumococcal disease is primarily seen in very young children and among the elderly. Figure 1 presents the number of cases detected in 2017 by age and sex. 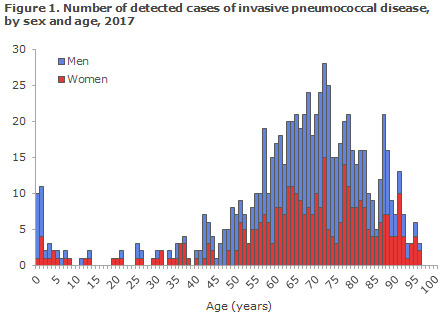 More than 92 different types of pneumococci are known, and their propensity to cause infections and serious infections in humans vary.

Figures 2a and 2b show the number of detected cases of invasive pneumococcal disease in the period from 2000 through 2017 among a: children aged 0-5 years, and b: all ages and the corresponding pneumococcal serotypes that caused the infections.

The occurrence of invasive pneumococcal disease caused by serotypes not covered by the vaccine has risen in recent years. 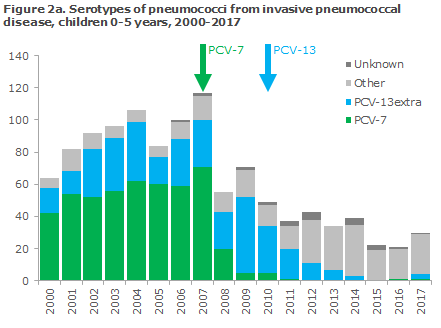 Since 1 October 2007, it has been a statutory obligation in cases of invasive pneumococcal disease to submit the pneumococcal isolate for serotyping at Statens Serum Institut. This obligation forms the basis for national level monitoring. The 2017 annual report is thus based on nation-wide data from the Department of Bacteria, Parasites and Fungi at the SSI to which has been added data from the Danish Microbiology Database (the MiBa).

We would like to take this opportunity to thank all Danish departments of clinical microbiology for their contribution to the national monitoring efforts and for a fruitful collaboration in 2017.

In 2017, the occurrence of invasive pneumococcal disease was slightly higher than in 2016. The 731 cases recorded in 2016 represented the lowest number observed since pneumococcal vaccination was introduced into the childhood vaccination programme.

The distribution of serotypes that cause invasive pneumococcal disease has been affected both by the vaccine and by the natural fluctuations of each of the serotypes. Therefore, caution is warranted when comparing figures from different years.

Nevertheless, the occurrence of invasive pneumococcal disease caused by serotypes not covered by the PCV-13 vaccine has risen in recent years. This increase, however, does not overshadow the overall benefit gained by the vaccine. The same trend was observed in other countries that enjoy the same high coverage as seen in Denmark, e.g. in England, and efforts are being made to develop new vaccines that may cover some of these types.

All countries must have in place national monitoring of polio. In some countries - including Denmark - polio monitoring has been extended to include all types of enterovirus. That means that whenever a person tests positive to enterovirus, the hospital submits the samples to the Danish WHO polio virus laboratory at Statens Serum Institut, who then undertakes further analysis including, among others, cell multiplication  and sequencing. Thereby, we can follow any changes in the occurrence of specific types of virus and determine if the virus is changing. Among Danish patients, fever and rash are frequent symptoms, but also several cases of meningitis, encephalitis and sepsis have also been seen.

Currently, a high incidence of enterovirus is being observed in Denmark, and Statens Serum Institut knows of many cases of viral meningitis in which echovirus 30 was detected in spinal fluid or stools. 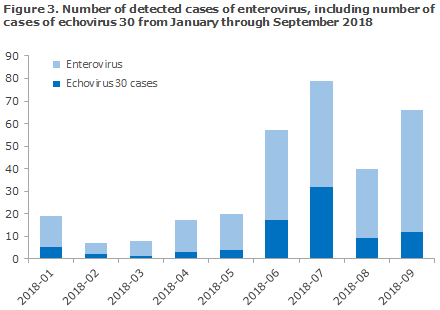 Furthermore, a total of eight cases have been detected of enterovirus A71 infection , a subtype that has previously caused cases of rhomboencephalitis and encephalitis in Germany, France and Spain.

Additionally, enterovirus D68 (EV-D68) has once again been detected in Denmark. EV-D68 occurs at 2-year intervals and mainly causes airway symptoms, but in rare cases it may cause a polio-like condition - AFM/AFP (acute flaccid myelitis/acute flaccid paralysis), particularly in children above 5 years of age. In 2014, this type of virus caused a major outbreak that started in the US and spread across Europe, EPI-NEWS 49/14. The US, in particular, recorded many AFM cases, but a limited number of cases were also seen in Europe. EV-D68 was found in Danish patients in 2014 and 2016 and now once more in 2018, but no AFM-/AFP cases of EV-D68 have been reported in Denmark so far.

We take this opportunity to call attention to the importance of submitting enterovirus-positive sample material for national enterovirus monitoring to Statens Serum Institut. We recommend submitting both positive stool, spinal fluid and airway samples. Airway samples are particularly important in the detection of EV-D68 as this type of virus has only been found in stools or spinal fluids in a very limited number of cases.