Screening of pregnant women for hepatitis B, HIV and syphilis, 2017
Novel vaccine combining protection against hepatitis A and typhoid fever

Screening of pregnant women for hepatitis B, HIV and syphilis, 2017


General screening of pregnant women for hepatitis B was introduced on 1 November 2005, EPI-NEWS 41/05, while screening for HIV and syphilis was initiated on 1 January 2010, EPI-NEWS 27-33/10. The general practitioner's tasks in relation to pregnancy screening are presented in Table 1. 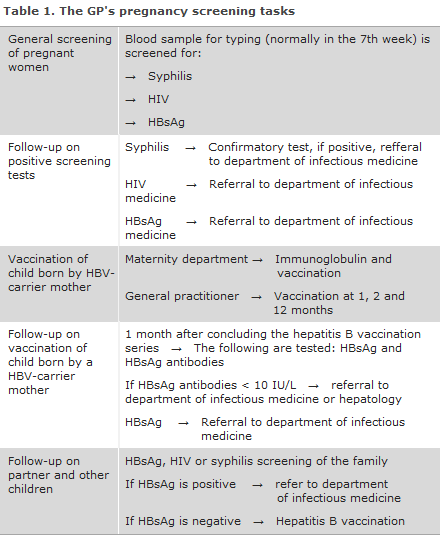 The vast majority of women accept the hepatitis B, HIV and syphilis screening offer.

When a woman tests positive in the pregnancy screening, it is important to confirm the test in question and to refer her to a specialist/outpatient clinic, but also to follow up on the woman’s partner. The fact that two pregnant women became infected with HIV during their pregnancies shows that women from at-risk populations, including women from high HIV and/or syphilis endemic areas, may have to be tested repeatedly during their pregnancies. From a professional healthcare viewpoint, repeated testing is not relevant as part of the general pregnancy screening in Denmark.

The general screening of pregnant women may still be considered a success. Not only are nearly all cases of mother-to-child transmission of the three conditions screened for avoided in Denmark.

Pregnant women who were unaware that they had become infected gain the opportunity to undergo work-up and receive treatment. However, only those pregnant women who are examined by a physician during their pregnancy can make use of this offer.

Pregnant women who stay in the country as undocumented migrants may be examined by a physician at a Red Cross health clinic in Copenhagen or Aarhus. Here, pregnancy screening is also offered, but this service does not form part of the public offer of care for childbearing women. If a woman in labour of unknown status arrives at a maternity ward, the ward shall perform tests for syphilis, hepatitis B and a rapid HIV test.

In 2017, eight out of ten of the pregnant women with syphilis were of Danish origin. This shows that, in Denmark, syphilis is not exclusively a condition that occurs among homosexual men; it has been re-introduced among heterosexual people.

As the syphilis screening tests made among pregnant women produce many false positive test results, a full serological testing (confirmatory test) is required of anyone who tests positive in the screening.

It is important that the treating physicians refer any pregnant women who have been diagnosed with one of the three infections in the screening to the relevant specialist departments, even if the woman in question has no symptoms of infection, Table 1. In pursuance of the Danish Health Authority's guideline on general screening of pregnant women for infection with hepatitis B, HIV and syphilis, the pregnant woman's partner and other children should have blood tests taken.

According to the Danish Health Authority’s guideline on HIV, hepatitis B and C virus published in 2013, all children born by carrier mothers who receive hepatitis B vaccination at birth and subsequently at the GP should be tested to confirm that the vaccination has taken and to test for current infection one month after the vaccination series has been concluded, i.e. when the child is 13-15 months old. This is required because inter-uterine infection occurs in some children, in which case the vaccine is ineffective. It is the responsibility of the GP to perform this test. If the child has become infected or is insufficiently protected despite the vaccinations, the child is referred to a specialist department. Statens Serum Institut sends out reminders to the GPs about hepatitis B vaccination of children born by hepatitis B-infected mothers, and about subsequent testing of these children.

Novel vaccine combining protection against hepatitis A and typhoid fever

A novel vaccine coined ViATIM® has been registered. The vaccine protects against infectious hepatitis (hepatitis A) and typhoid fever. It contains inactivated hepatitis A virus and encapsulated polysaccharide from typhoid bacteria.

The vaccine may be given as from 16 years of age to persons who are at risk of becoming infected with hepatitis A virus, and who will be travelling to areas where there is a risk of typhoid fever. This applies, in particular, to travellers to the Indian subcontinent, but also to travellers who plan to stay in Africa, Asia and South America for longer periods of time, see ssi.dk/rejser (in Danish language) for more information about individual countries.

Basic vaccination is achieved by a single dose of ViATIM®. In case of foreign travel, the first vaccination may be given until the day of departure, whereby the vacinee achieves protection against hepatitis A. A protective level of typhoid fever antibodies is achieved approx. 14 days after the vaccination.

To achieve long-term protection against infection caused by hepatitis A virus, one additional (booster) dose of inactivated hepatitis A vaccine must be given, normally 6-12 months after basic vaccination.