In 2017, a total of 94 cases of imported malaria were detected at Danish laboratories of microbiology.

For a detailed description of the malaria cases imported to Denmark in 2017, please see the annual report at the SSI website.

Figure 1 presents the development in the number of malaria cases imported to Denmark since 1998, by place of infection. 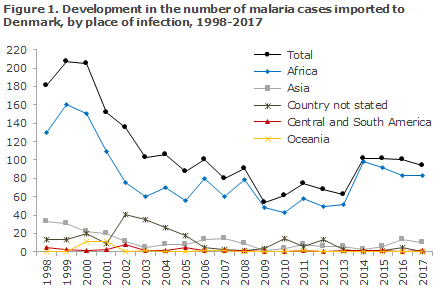 In 2017, the number of detected malaria cases that were imported to Denmark remained roughly on a par with the level recorded in the past few years; approx. 100 annual cases. Compared with 2014, 2015 and 2016, the year 2017 recorded a lower occurrence of vivax malaria among refugees arriving to Denmark from Eritrea/Ethiopia. The same trend has been observed in other Northern European countries.

There is, however, still a need to be attentive to vivax malaria in persons from Eritrea, particularly in children. In some cases, vivax malaria presents as a mild subclinical infection, which may even not present until several months after a stay in a risk area. It is conceivable that some of the patients who have arrived from Eritrea may already have received malaria treatment previously in their disease course in the form of a schizonticidal drug (e.g., artemether/lumefantrine or atovaquon/proguanil). They have therefore recovered temporarily, but vivax malaria recurs in these patients due to lacking radical treatment with primaquine, as was observed in several cases in Denmark in the course of 2017.

Refugees from Eritrea, particularly children, must therefore undergo relevant and rapid laboratory testing for malaria even at minimal clinical suspicion. Additionally, it must be ensured that patients also receive supplementary radical vivax treatment in the form of primaquine. Prior to primaquine treatment, it should be established that the patient does not suffer from congenital glucose-6-phosphate dehydrogenase (G6PD) deficiency.

In contrast to the decline in vivax malaria cases among Eritrean refugees, 2017 has recorded a slight increase in the number of malaria cases from Africa caused by Plasmodium falciparum and Plasmodium ovale. The 2017 figures thus confirm that for common travellers, the risk of malaria is mainly the risk of serious falciparum malaria in Africa, whereas the risk of malaria outside of Africa is very limited and mainly due to vivax malaria. Immigrants and their children who visit their countries of origin generally constitute the main risk group, as these persons typically stay for longer periods of time with their families, sometimes in areas with a considerable local risk of malaria.

As in previous years, 2017 recorded a relatively high number of malaria cases from the following three countries: Afghanistan, Pakistan and India. In contrast, no malaria cases were seen among travellers returning from the remaining parts of Asia, including the majority of South-east Asia, despite the large number of Danish tourist travellers to several of these countries. Furthermore, only a single case of malaria was observed in a traveller returning from Central America, where the risk of becoming infected with malaria as a traveller should therefore be considered low.

The SSI’s malaria prophylaxis recommendations from last year, EPI-NEWS 27b/17, remain unchanged and will be published in next week’s issue of EPI-NEWS.

The SSI is striving to improve the ongoing monitoring of malaria imported to Denmark by way of automatic extraction of diagnostic data from The Danish Microbiology Database, The MiBa. A project to achieve this goal is underway in collaboration with the Danish departments of microbiology.