The 2017/18 influenza season was unusual in terms of prevalence, duration and types of influenza virus in circulation. The season was prolonged and characterised by a very high level of influenza activity. The high level of activity was reflected in a high number of patients being admitted to hospital with influenza and a substantial excess mortality among both adults and elderly people.

For a detailed epidemiological description of the influenza activity, please see the annual report on the 2017/18 influenza season. 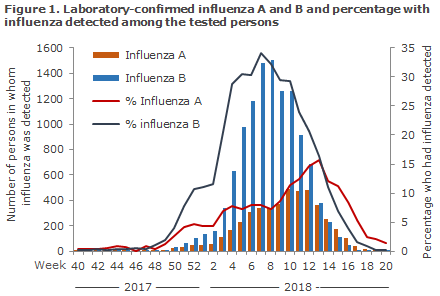 A total of 7,667 patients with laboratory-confirmed influenza were admitted to hospital, according to the National Patient Registry, Figure 2.

This is the highest number of admissions recorded since 2010/11. In all, 95% of the admitted patients had underlying risk factors for a serious influenza course. The median admission age was 69 years for all admitted influenza patients, but considerable variation was present as patients admitted with influenza A(H1N1), A(H3N2) and influenza B had a median age of 52, 74 and 70 years, respectively.

The total estimated excess mortality related to influenza for the entire 2017/18 season was 1,644 deaths, the highest number observed since 2010/11. Excess mortality was more pronounced among adults aged 15-64 years and elderly people aged 65 years of age or more.

The Danish 2017/18 influenza season was tough, and many citizens were affected by influenza, particularly influenza B. The consequence was more hospitalisations and more deaths than were recorded for previous influenza seasons. A similar situation with a high number of hospitalisations and an elevated mortality in many countries was reported from many countries in Europe . In contrast to influenza A (H3N2), Influenza B is usually not associated with serious illness leading to hospitalisation and excess mortality among elderly people, as influenza B virus typically affects school children and young adults.Inthe final part of the season there was also a considerable number of influenza A cases.

Although the vast majority (95%) of the patients who were hospitalised with influenza belonged to a risk group, i.e. had a chronic disease or were older then 65 years of age, the majority had not received influenza vaccination (63%). Even at a low effectiveness, vaccination prevents both hospitalisations and deaths. Furthermore, the disease often runs a less serious course if you do fall ill even though you have been vaccinated. On the positive side, it is worth noting that the vaccination coverage increased to 50% among the elderly who are 65 years or more. This percentage, however, is still far from the WHO objective of a 75% vaccination coverage among elderly who are 65 years of age or more.

This season saw a record-high number of microbiologic samples tested for influenza, and the positive percentage was generally high. This is so because many have fallen ill, but part of the explanation may also be owed to the fact that several hospital departments have introduced so-called rapid tests or “point-of-care tests”. That means that access to influenza test results at Danish hospital departments is now more rapid and uncomplicated. This is a good thing as a diagnosis and, if needed, isolation, can be achieved more rapidly. Increased testing may have contributed to the fact that this year has recorded more hospitalisations following the detection of influenza than previous seasons. Nevertheless, this year also recorded more influenza patients receiving intensive therapy than in previous seasons, and this is a patient group that we already expect will be tested thoroughly.