One female first-time donor tested HIV positive. Through contact tracing, the woman’s bisexual husband also tested HIV positive (it remains unknown if the woman was aware that her husband was bisexual at the time of her donation; the blood donor quarantine rules stipulate that you cannot donate blood if you have had sex with a bisexual man within the past four months).

Eleven persons tested positive to hepatitis B. Among these, one was a multiple donor who had engaged in sex with a person from Africa six weeks before the latest donation (the blood donor quarantine rules stipulate that you cannot donate blood if you have engaged in sex with a person from Africa, among other areas, within the past four months). Nine of the ten first-time donors were born and raised in a high-endemic country. The mode of infection in the last case remains unknown.

Three persons tested positive to hepatitis C; two first-time donors and one multiple donor who had engaged in sex with a person from a high-endemic country. Look-back on the multiple donor revealed no infected recipients.

The number of donors who tested positive in Denmark in 2017 remained low, Figure 1. The majority of positives were first-time donors. One first-time donor and two multiple donors (also coined seroconverters) had engaged in sex with a risk group person and were therefore covered by the blood donor quarantine rules.

The Department of Infectious Epidemiology and Prevention holds information on screening of blood for HIV as from 1986, and for hepatitis B and C as from 1994. 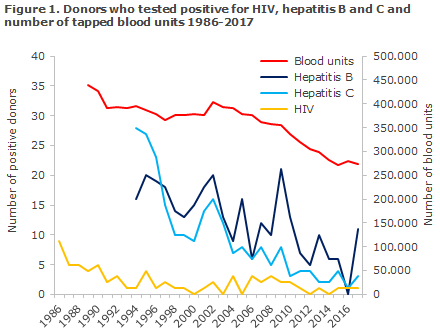