Hepatitis A virus outbreak due to Iranian dates

Hepatitis A virus outbreak due to Iranian dates

On 30 January 2018, Statens Serum Institut recorded an increase in the number of patients with infectious inflammation of the liver caused by hepatitis A virus (HAV). At the time of writing, a total of 27 patients have been registered as forming part of the outbreak.

New patients are still being registered, but we expect that the outbreak will subside in the course of the next few weeks as the source of transmission, Iranian dates from the Rema1000 supermarket chain, have been withdrawn.

HAV infection presents as suddenly occurring fever, nausea, fatigue and abdominal pain. After some days, jaundice may appear with yellowing of the skin and the whites of the eyes. The urine becomes porter-coloured and stools pale. Adults can have these symptoms for one or more weeks, after which they have overcome the infection and gained life-long immunity. However, prolonged disease courses are seen, and in rare cases also acute hepatic failure and relapse. Children usually run a milder disease course and are often asymptomatic.

The patients of this outbreak presented with symptoms from 22 December 2017 to 8 February 2018, Figure 1, and reside in all parts of Denmark. Of the 27 patients who have so far been registered as forming part of the outbreak, 15 are women (56%) and 12 men. The median age is 65 years (range 15-90 years), Figure 2. The majority of patients have no known underlying condition, but developed a severe disease course during which 22 (88%) were admitted to hospital. Material was available from virus typing in 18 patients. In all cases, the virus was of the HAV 3A type, and genetic tests demonstrated that they were divided into closely related groups. 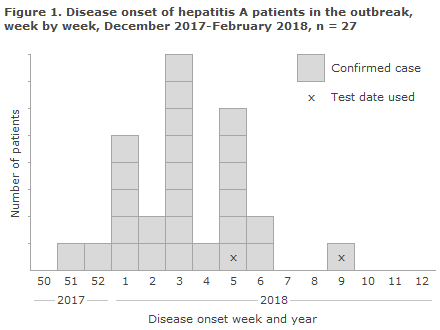 Investigation of the source of infection

Initial interviews with the patients demonstrated that they had not been travelling in the six weeks leading up to their disease onset, that they did not know other patients also affected by the outbreak and that they lived in various places scattered across Denmark.

During the initial interviews, dates were suspected because several of the patients mentioned having ingested dates. The connection between dates and disease risk was then investigated in a case-control study. As part of the study, 19 patients' answers to a series of questions inviting them to detail if they had ingested a range of specific food items were compared with answers from a control group counting 54 healthy persons. The controls were selected to match the age, sex and residential municipality of the affected persons.

The study indicated that the source of the infection was probably dates. A total of 89% of the cases stated that they had ingested dates as opposed to 28% of the controls (ORDATES=14,5; [95% CI:3.2-65]). No other foods could explain the outbreak. The initial results of the case-control study were passed on to the Danish Veterinary and Food Administration on 5 February. On this basis, the importer and Rema1000 on 6 February decided to withdraw the dates in Denmark.

Among the 27 patients comprised by the outbreak, 23 (92%) reported having ingested dates in the communicable period. Two patients were not interviewed. Mot patients described the dates as soft, dark dates with stones, bought in Rema1000. Seven patients remembered that the name of the dates was “Juicy dates”. The Danish Veterinary and Food Administration’s reverse tracking demonstrated that the outbreak was due to Iranian dates imported by RM Import A/S and sold in Rema1000. Dates from three patients' homes were picked up and tested by PCR. So far, all tests have been HAV-negative.

On 1 February 2018, the SSI informed the remaining European countries of the presumed food-borne outbreak via the ECDC (European Centre for Disease Prevention and Control). Norway reported that they had one HAV patient who had ingested dates, and typing of the patient’s HAV virus was a perfect match to the outbreak. Reverse tracing has demonstrated that dates from the same importer are sold in Norway and Germany. In Norway, dates from the same producer were withdrawn on 7 February.

This is the second national Danish foodborne hepatitis A outbreak in Denmark in recent years. The first outbreak formed part of a Nordic outbreak in 2012-13 caused by frozen strawberries, EPI-NEWS 48/13.

The current outbreak is most likely caused by Iranian dates. This is underpinned by the case-control study and also by the temporal relationship between the increased sale of dates at Christmas and the marked disease increase four weeks later. To these factors should be added the extended shelf life of the product, which means that the product may have been consumed in the course of a prolonged period of time. The majority of patients remember having ingested dates. The dates were described in the same manner, and the majority of patients had purchased their dates in Rema1000. Furthermore, the distribution of dates in 400g packs sold in Rema1000 is in line with the fact that patients were geographically scattered across Denmark. HAV type 3A is not widespread in Denmark, but is endemic in the Middle East where the dates were grown. The finding of the same HAV type in a Norwegian patient who had also ingested dates from the same importer also underpins dates as the source of infection.

It is difficult to demonstrate RNA virus like hepatitis A in food in general, and it is therefore not surprising that it has not been possible so far to identify virus in the samples from dates obtained in patients.

The outbreak was identified via the national individual monitoring scheme and the voluntary submission of HAV-IgM positive samples to Statens Serum Institut for free virus typing. The investigation of the cause of the outbreak was extremely fast - just one week after the outbreak had been identified, the suspected dates were withdrawn from the shops. The withdrawal has probably been the direct reason why more disease cases were prevented. HAV has a considerable outbreak potential in a susceptible population like the Danish population. In step with the increasing international trade with fresh and frozen foods, including fruit and vegetables from countries where HAV is endemic, the risk of infection via ingestion of HAV-contaminated foods increases.

Doctors need to be attentive to examining patients with relevant HAV symptoms, even if they have no travel history, and to ensure timely notification of the cases. Only 17 of 27 cases were notified via the individually notifiable monitoring scheme (Form 1515). Furthermore, to further strengthen the monitoring scheme Danish laboratories are encouraged to submit all HAV-IgM-positive samples for free virus typing at Statens Serum Institut.