The objective of HAIBA is to establish a national database that may serve to underpin efforts to reduce infections related to hospital treatment. Postoperative infection is one of the largest groups of hospital-acquired infections that are largely preventable. In future, HAIBA will report the number of laboratory-confirmed deep infections following TKR. For this purpose, HAIBA combines patient administrative data from the National Patient Register (NPR) with results from the Danish Microbiology Database (MiBa). The intention is to include other postoperative infections into HAIBA.

Deep infections following TKR are rare (approx. 1%), but their complications can be very serious. They may be caused by bacteria acquired during surgery, but in some cases they arise later in connection with bacteraemia. The majority of these infections see within 90 days after the TKR.

The primary treatment of deep infection is surgery supplemented with prolonged antibiotic treatment. In spite of this, infection rates are high (up to 30-40%). The treatment courses are costly and very burdensome for patients. Often, repeated surgery is needed. At any TKR re-operation, systematic screening for infection is usually done by sampling according to Kamme-Lindberg. Five tissue biopsies are taken from the same location in the knee and sent for culture and susceptibility testing.

In the USA and the Nordic countries, an increase in the incidence of deep infections following TKR has been reported in the course of the past 10-20 years. Possible explanations may be a higher number of operations in patients with co-morbidity and a higher age than previously, a higher occurrence of resistant bacteria in the hospital environment and greater awareness that prosthesis dysfunction may be due to low-virulent infections, and improved diagnostics and registration practices.

Ongoing monitoring may produce insight into areas that can be improved and it may be possible to strengthen the quality of infection hygiene precautions and thereby patient safety. Previously, systematic monitoring of deep infections following TKR has not been in place in Denmark. A limited number of departments have audited infection clusters. Additionally, the annual report of the Danish Knee Arthroplasty Register presents the number of revisions made due to deep infection. Notification to the Danish Knee Arthroplasty Register is mandatory and is done electronically.

The advantage of HAIBA is that the figures include microbiology data, comprise figures from all Danish hospitals, private as well as public, and that data are updated continuously. The numbers are updated every night and reported monthly, which makes it possible to follow developments continuously and react to signals that call for further investigation.

The new HAIBA monitoring was developed in collaboration with orthopaedic surgeons with a special interest in deep infections following TKR. The Danish Society for Hip and Knee Arthroplasty (DSHKA) has approved the case definition.

Information about the index operation, the primary TKR, is extracted from the NPR. An infection is registered provided that a relevant re-operation has been registered and at least two of three Kamme biopsy cultures have tested positive for the same micro-organism.

The HAIBA figures are presented online at www.haiba.dk. The site also provides documentation relating to the data used, including the codes used in the case definition. Online and in this issue of EPI-NEWS, infections are presented that have occurred following planned index operations with a follow-up period of 3-90 days, aggregated to the national level. More detailed figures with a 730-day follow-up period and figures describing the hospital/department level will be made available to the individual regions pending further agreements to this effect.

The algorithm has been assessed and compared with existing data sources for infections following primary TKR, and comparisons have been made to two sources: (1) a database from the Capital Region of Denmark that registers clinical assessments of infections at the time of the operation, (2) and the database from the Lundbeck Foundation for fast-track hip and knee surgery, which is based on manual assessment of discharge summaries following identification of infections. These validation studies demonstrated a high degree of overlap between the HAIBA algorithm and the reference data (specificity from 99.8% to 99.9% and sensitivity from 59.0% to 78.0%).
The discrepancies between the HAIBA and the reference data were due to different ways of recording the infections.

The median monthly risk (cumulative incidence proportion) for infections occurring 3-90 days after a planned TKR was 0.68 per 100 operations. The risk per month is presented in Figure 1. 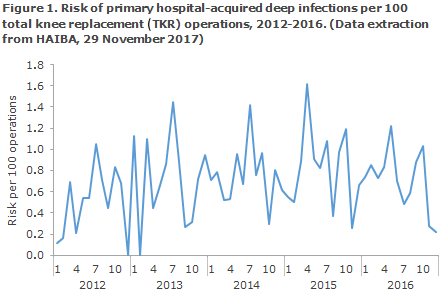 The sex and age-specific risk is shown in Table 1. 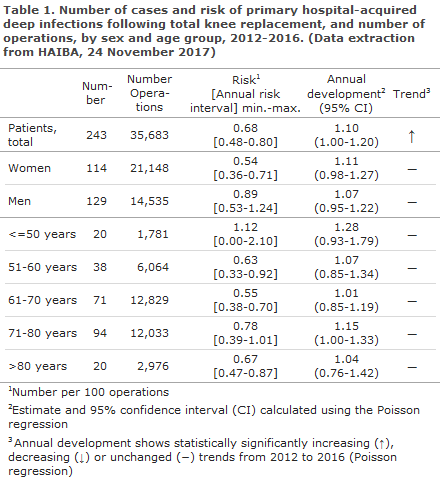 The increasing trend shown from 2012 to 2016 in Table 1 is only just statistically significant, but this is due to a low occurrence in 2012 and not to an ongoing increase. The figures also showed a higher risk for men than for women.

With the addition of deep infections following TKR, HAIBA now includes another indicator of postoperative infections. Among others, HAIBA’s strength is that data are collected automatically and that they are updated continuously and include data from all of Denmark. Therefore, the healthcare workers in hospitals are not burdened by data entry tasks.

HAIBA has been validated with reference to various other relevant data sources. Nevertheless, no reference source shows the absolute truth about the occurrence of deep infection following TKR as any assessment always includes an element of clinical assessment of the diagnosis. Overall, it may be concluded that HAIBA has developed a meaningful monitoring algorithm. Even so, it should be mentioned that HAIBA cannot be used as a tool for diagnosis of infections in individual patients. The diagnostic process involves physicians taking decisions based on all available patient information, including clinical symptoms. It is, e.g., evident that re-operation is performed on the basis of a clinical assessment. Typically, situations may arise with negative cultures of samples drawn after antibiotics treatment was initiated. These cases will not be identified in HAIBA.

HAIBA does not take case-mix into account. Thus, the monitoring is not adjusted for differences in patient populations and their risk factors (e.g. comorbidity) between the various departments and hospitals. Local differences may exist and changes may have been introduced to the indication for re-operation and culture and coding practices. This means that data are adequate for monitoring of trends and identification of signals that prevent further investigation. But considerable caution is needed when figures from different departments are compared as the observed differences may be explained by many different factors.

Each hospital only records a limited number of annual cases. Therefore, it makes more sense to follow the overall trends in the national monitoring. Nevertheless, for the individual orthopaedic surgery departments it is, of course, relevant to follow their own figures with a view to initiating interventions as needed. HAIBA will therefore make the data available for local use, pending further agreements to this effect.

In collaboration with the Danish Orthopaedic Surgery Society, a process was initiated in which departments of orthopaedic surgery and departments of clinical microbiology explore which tools and presentations are best suited for underpinning the local monitoring and infection control.

This process is very important as HAIBA may only underpin the infection hygiene efforts if data are meaningful to daily practice and are disseminated in a manner that is actionable.

Unless special circumstances arise, EPI-NEWS will not be published until week 2, 2018. The editorial team wishes everyone a merry Christmas and a happy New Year.