Shigellosis is caused by bacteria from the Shigella genus that counts four species. The shigella bacterium is seen only in humans. It is transmitted from person to person of via contaminated foods or water. Diagnosed cases of shigellosis are notifiable for departments of clinical microbiology which must report to Statens Serum Institut (SSI), and clinically notifiable to the SSI and the Danish Patient Safety Authority. Recent years have seen a marked increase in the number of notified shigella cases, Table 1.

From 2014 to 2016, the number more than doubled (from 115 to 276). This increase may be due to the fact that some departments of clinical microbiology now diagnose shigella by polymerase chain reaction (PCR) on DNA directly from stools. This PCR is designed to detect the ipaH gene that is characteristic for all four shigella species, but also for the enteroinvasive E. coli (EIEC). The method is more sensitive than culture, but unable to distinguish between the two groups of bacteria without further tests. Furthermore, it has proven difficult or impossible to find the ipaH-positive bacteria in many of the DNA-positive stool samples. In Figure 1, the majority of the increase in the “not stated” shigella species is probably due to shigellosis detected by PCR. 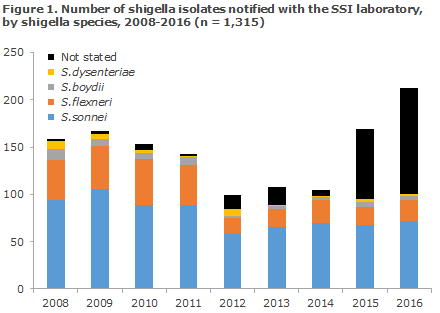 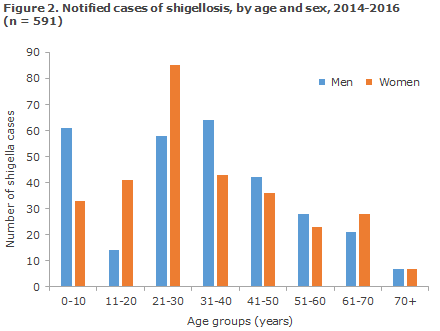 Of the 591 recorded shigella cases in 2014-16, information about country of infection was provided for 474 cases. Hereof, 91 (19%) had become infected in Denmark, whereas 383 (81%) had become infected abroad. The most frequently reported countries were India (11%), Pakistan (7%), Egypt (7%) and Cuba (4%). The purpose of the travel was known for 281 of the 383 travel-associated cases. The majority were tourists or business travelers (77%), whereas 21% had become infected while staying with family abroad, 1% were stationed abroad, and 1% were refugees or tourists who had become infected before their arrival to Denmark.

In the 2014-2016 period, one food-borne shigellosis outbreak was recorded. The outbreak, which originated from a canteen in March 2014, counted a total of five persons, three of whom tested positive for Shigella sonnei. A suspected source of infection was imported sugar peas from Kenya that were served raw without any previous blanching. Furthermore, an outbreak was recorded in February 2014 in a kindergarten in Copenhagen, where Shigella sonnei was detected in four children. Here, transmission is believed to have been by person-to-person transmission after the first case had become infected while travelling in Africa.

Thanks to whole-genome sequencing, another outbreak comprising seven cases was recorded in November-December 2015. All patients were men aged 23-49 years from Copenhagen, and the infection is believed to have been transmitted sexually among men who have sex with men. In addition to these outbreaks, a total of 18 shigellosis clusters each counting 2-3 cases were identified via the clinical notifications. These clusters primarily consisted of family members who fell ill after travelling together abroad.

The use of a PCR method designed to detect ipaH, which is unable to differentiate between shigella and EIEC, is clinically well-founded as the bacteria are closely related, cause the same clinical picture in patients and share both mode of infection and reservoir. In the forthcoming revision of the Executive Order on Doctors’ Notification of Infectious Diseases, it is expected that notification will be required for shigellosis defined as “Symptoms that are compatible with shigellosis AND detection of Shigella spp. or enteroinvasive E. coli (EIEC) in clinical sample material”. Thus, the monitoring efforts will be changed, and a further increase in notifications may be expected.

The transition to new typing methods including PCR is a challenge for the monitoring of food-borne and sexually transmittable infections if the bacteria cannot also be cultured and characterised. As previously, Statens Serum Institut therefore encourages Danish departments of clinical microbiology to culture the bacteria and submit their isolates for further typing. So far, whole-genome sequencing has been used experimentally for shigella, but it will increasingly become part of monitoring in the future. A strong overall clinical and microbiological monitoring is essential to detecting shigellosis outbreaks, identifying risk groups and determining which countries the infection originates from.
(L. Müller, S. Ethelberg, Department of Infectious Disease Epidemiology and Prevention, F. Scheutz, Department of Bacteria, Parasites and Fungi)

Polio is closer than ever before to being eradicated worldwide. As from 2014, the WHO has declared international spreading of poliovirus (both wild and vaccine-derived virus) a public health emergency of international concern.

The latest meeting in the WHO’s Emergency Committee on 14 November 2017 took stock of the efforts made to eradicate polio. Only 15 cases of polio caused by wild poliovirus (WPV) have been recorded to date in 2017. This is the lowest number ever recorded. The cases are limited to two countries only; Afghanistan and Pakistan. Throughout 2016, a total of 37 cases were detected, Table 2.

Unfortunately, another 80 cases of polio were recorded. These cases were caused by a vaccine virus that has regained its pathogenic ability, a so-called circulating vaccine-derived poliovirus (cVDPV)*. These cases were primarily seen in Syria, but also in the Democratic Republic of Congo. The WHO is concerned about the countries from which spreading has been detected, but also about the cases triggered by vaccine virus that were all caused by circulating vaccine-derived poliovirus of type 2. This concern is due, among others, to the fact that wild poliovirus of type 2 has been eradicated, and that vaccination with oral polio vaccine of type 2 was discontinued globally back in April 2016. 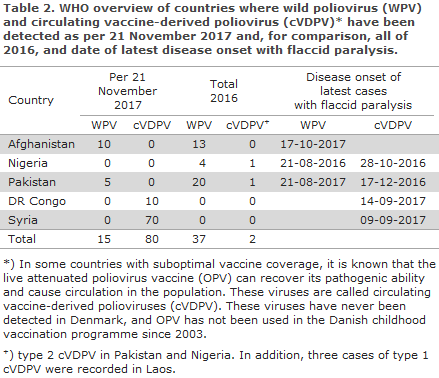 Currently, poliovirus spreads from Afghanistan, Pakistan and Nigeria. The latest reports from Nigeria of wild poliovirus and circulating vaccine-derived poliovirus are from 21 August and 28 October 2016, respectively, but a large share of the population in northern Nigeria is completely or partly unavailable for vaccination. Thus, the WHO’s Emergency Committee assesses that there is a high risk of unacknowledged poliovirus circulating in this part of the country, and that a risk exists of spreading from there to the neighbouring countries.

Therefore, in pursuance of the International Health Regulations (IHR), a requirement is in place for (booster) vaccination against polio in persons who leave Afghanistan, Pakistan or Nigeria after stays of 4 weeks or more, provided they have not received their latest polio vaccination within 1 year.

As previously, the Danish authorities recommend that booster vaccination be administered before departure from Denmark, primarily to ensure that the traveller receives a quality-assured vaccine in sterile conditions. The vaccination shall be documented in the yellow international vaccination certificate.

If the traveller has already received booster vaccination within the past 12 months (and leave the country within this period), he needs to bring his normal vaccination card as proof that he has been vaccinated.

When travelling to countries where wild poliovirus and circulating vaccine-derived poliovirus were detected within the past 3 years, but where there are no indications of spreading to other countries, all travellers should be fully vaccinated against polio. This currently applies to travellers to Cameroon, Guinea, Laos, Madagascar, Mozambique, Myanmar and the Ukraine.

Medical progress has been rapid, and today people who have HIV live just as long as everyone else - without suffering any side effects from their medication. But there has been no corresponding development in the Danes' understanding of the condition, and the images of HIV from before effective treatment existed prevail.

The images of HIV and AIDS stick in our minds, and many people continue to think of physical weakness and premature death when they think about the condition. This perception is miles away from the day-to-day life of well-treated people with HIV. On 1 December in connection with World AIDS day, the Danish AIDS Foundation therefore launches a campaign designed to update Danes’ perception of the condition.

First and foremost, medical progress has caused HIV to be different to what many of us imagine. Effective medication means that HIV cannot damage the immune system, and medication reduces the amount of virus in the blood, thereby ensuring that affected people are no longer infectious. This means that the notions of serious disease and premature death are far from today’s reality.

Outdated notions of HIV are the basis of fear and prejudice that can make it difficult for HIV positive people to talk with others about their condition. If we can eradicate fear and prejudice, it will be possible to lead a completely normal life with HIV. But there is some way to go before the general perception of HIV is on a par with medical progress.

The outdated notion of HIV and fear of the surrounding world’s reactions also keep groups of people who are at risk from seeking help.
Half of those who are diagnosed with HIV are tested so late that they risk becoming seriously ill because their immune systems have been damaged as the HIV virus has not been treated.

It is a problem that fear of the surrounding world’s reaction keeps people from being tested. If a more updated notion of HIV can be established, this may help people be tested and treated earlier, which will be beneficial for the HIV-positive individual while also serving to curb the epidemic, because well-treated HIV positives cannot transmit the infection.

The AIDS Foundation’s campaign is launched on World AIDS Day, 1 December, to show that people with HIV live perfectly normal lives. Thereby, the campaign is a first step towards a more contemporary notion of HIV.

Statens Serum Institut monitors the occurrence of HIV and AIDS in Denmark. Recent reports show that the number of new HIV diagnoses is not rising, and that a small decrease is observed among men who have sex with men.

In the rest of the world, more and more HIV positive people also enjoy the effective treatment, why the number of newly infected is decreasing. Nevertheless, developments in Eastern Europe and Central Asia are not encouraging as more and more people are becoming infected with HIV, and the political will to fight the epidemic is lacking. This is due, first and foremost, to the fact that the risk groups in Eastern Europe are drug users and men who have sex with men. None of the groups enjoy the same rights as the rest of the population in the affected countries.