There were a total of 170 notified cases of legionella pneumonia (LP) with symptom onset in 2016; in accordance with the criteria described in EPI-NEWS 40/09. A total of 108 (64%) were men; the median age was 66 years for men and women alike. A total of 133 persons had probably become infected in Denmark. The median age for these persons was 67 years (range 21-92 years), and 84 (63%) were men. For 51 patients, at least one pre-disposing factor was known. In all, 22 patients (13%) died from or in connection with their legionnaires’ disease. The number of notified persons is listed by infection categories in Table 1. The number and incidence per 100,000 of notified cases of legionella pneumonia acquired in Denmark in 2016 are presented in Table 2 by region and area and compared with the incidences for 2014 and 2015. 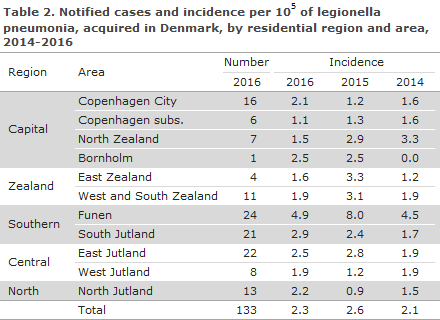 Among 119 cases with presumed or known community-acquired infection in Denmark (including four travel-associated cases within Denmark), 52 were culture-verified. In 23 cases, it is known that a suspected water supply in the person’s home, workplace or elsewhere (including stay at a Danish travel destination) was tested. In seven cases, the typing results from patients concurred with those from a water sample (four from the patient’s home, one from the workplace, one from a travel destination and one from another suspected source of infection). In ten of the tested cases, no patient sample was available for comparison with isolates from water samples. For nine of these cases, Legionella pneumophila was detected in the tested systems.

A total of 14 cases of presumed or certain infection via institutions were notified, ten from hospitals and four from nursing homes. Seven of these 14 patients died in connection with their legionella infection. All were culture-verified, and water samples were tested in nine of these cases. The results of the tests confirmed that infection had originated from the institutions’ water in seven of the cases (two nursing homes and five hospital departments).

A total of 37 persons were probably infected during travels abroad, one of whom died. A total of 25 of the cases were notified with the European Centre of Disease Prevention and Control (ECDC). Hereof, four formed part of international clusters that had two or more cases in more than one country. Italy and Thailand were the most frequently recorded travel destinations, each accounting for seven cases.

Four persons were probably infected in Dubai, The United Arab Emirates; two of these along with another two persons from 2017 formed part of a major international cluster of Legionnaires’ disease associated with travel to Dubai. The cluster counted a minimum of 75 cases from October 2016 to September 2017.

Legionnaires’ disease can be diagnosed by culture, legionella antigen urine test (LUT), titre increase in serum immunoglobulin or by PCR. Legionella pneumophila was isolated by culture from 76 patients. The isolates were distributed by serogroups as follows: 41 serogroup 1 (27 Pontiac and 14 non-Pontiac), 19 serogroup 3, one serogroup 4, three serogroup 5, seven serogroup 6, two serogroup 10, one serogroup 15, and two isolates could not be associated with any specific serogroup.

The distribution by serogroups was roughly in line with previous years. Nevertheless, the share of serogroup 3 was slightly higher than normal (25%), whereas the share ranged from 13-24% from 2012 to 2015. Serogroup 3 occurs frequently in water installations (as does serogroup 1, non-Pontiac). Among culture-verified cases, for which infection happened in Denmark, serogroup 3 comprised 32% of the cases (19 of 59 cases). Serogruppe 3-infections (and generally non-sg 1) cannot be detected by LUT. All clinical isolates were attributed a sequence type (ST) by sequence-based typing. Thus, 30 different ST were detected.

As previously, the most frequently detected type was ST1 (all serogroup 1) with 12 isolates (16%), EPI-NEWS 46/12. In 37 cases, the diagnosis was based on a positive LUT exclusively, and in 15 cases on a combination of LUT and PCR. In 42 cases, the diagnosis was made based on positive PCR alone. A total of 133 of the patients tested positive by PCR, whereas 80 tested positive by LUT. In 2016, no cases were detected based on serology alone.

As from 2015, the monitoring of Legionnaires’ disease was changed. The change implies that if the case is not notified by the clinicians, reminders may be sent out to obtain 1515 notifications based on the microbiology results recorded in the MiBa, EPI-NEWS 44/15. The collaboration with the MiBa has meant that up to 25% more cases are being recorded. In 2016, reminders were sent out to 76 cases, nine of which remained unnotified. After review of the laboratory results for the nine unnotified cases, it is our assessment that only one of these cases was a certain case, diagnosed by positive Legionella pneumophila PCR from the North Denmark Region. In seven of the nine unnotified cases, the microbiology diagnosis was doubtful because Legionnaires’ disease could not be confirmed by positive LUT. In one case with a borderline positive PCR for Legionella pneumophila, the clinical particulars were inconsistent with Legionnaires’ disease. Thus, it is our assessment that the monitoring of Legionnaires’ disease in 2016 was virtually complete. 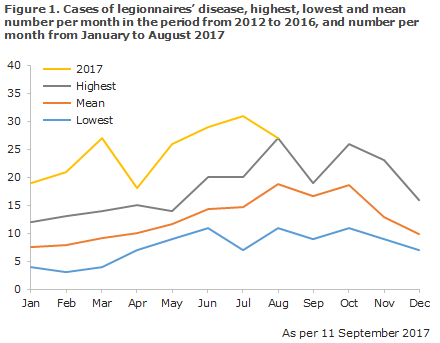 Similarly, in the first seven months of 2017, the European Legionnaires’ Disease Surveillance Network (ELDSNet, ECDC) recorded a 45% increase in the number of European travel-associated cases compared with 2012-2016.

The cases of Europeans with Legionnaires’ disease following travels abroad are primarily seen in the older age groups, and the largest percentage increase (> 100%) was observed in persons above 70 years of age.

The overall increase in the number of European cases of Legionnaires’ disease following travels within the EU was associated with a wide range of destinations, including Greece, France and Spain, but the greatest increase was seen for travels to Italy, Table 3.

In Denmark, we continue to see a high level of legionella pneumonia as reflected in the fact that Denmark has one of Europe’s highest incidences. 2016 saw slightly fewer cases than 2015, whereas at present it seems that 2017 will become a year with a considerably higher number of cases than recorded in previous years.

The increase applies to persons infected in Denmark as well as persons infected during travels abroad, but the increase in the number of patients infected in Denmark seems to be the highest of the two. Unlike other European countries, in Denmark we see many cases caused by types that are common in water systems. In all, 49 of 76 culture-verified cases (64%) were thus caused by serogroup 1 non-Pontiac or non-serogroup 1, and only two of these 49 cases can be attributed to infection abroad. According to the epidemiological information and typing data, 2016 recorded no signs of actual clusters or outbreaks in Denmark. Thus, there is no obvious explanation for the increasing number of Danes with legionnaires’ disease who have become infected in Denmark.

The general increase in Europe recorded by the ECDC from 2012 to date for travel-associated cases of Legionnaires’ disease (range 37-175%), particularly in elderly people above 70 years of age, also cannot be easily explained by reference to outbreaks or changed monitoring practices.

The primary preventive measure for legionella pneumonia is limitation of the growth of bacteria in potential sources of infection. The bacterium reproduces in lukewarm water, but not in cold water (below 20 °C) and it dies at temperatures above 50 °C. The risk of growth is particularly high in stagnant water that fails to meet the mentioned temperature requirements.

That may be the case in blinded tube endings or at rarely used water draw-offs. It is therefore important that water installations are designed and used correctly to avoid any blinded tube endings, and to ensure that all water draw-offs are used regularly and flushed with cold/hot water. Shower hoses and shower heads comprise a risk as they are rarely or never flushed with water above 37 °C. It is therefore recommendable to regularly flush your shower hose and head with hot water (warmer than 50 °C) and in some cases to replace the hose and head regularly. When staying at, e.g., hotels where the water in the pipe systems may have remained stagnant for some time, it is recommendable before starting to use the bathroom or kitchen to turn on all taps and leave the room letting the water run for some minutes until it has become hot enough and the system has thus been flushed.