Tick-borne encephalitis (TBE) is caused by the TBE virus (TBEV), which is transferred within minutes following a bite from an infected tick or, rarely, by ingestion of unpasteurized dairy products. Infection with the European subtype of TBEV is typically two-phased with initial fever and flu-like symptoms (“summer influenza”) that recede after 1-2 weeks. In approx. one third of cases, the infection progresses with symptoms from the nervous system in the form of encephalitis, meningitis or meningoencephalitis. In children, TBE can cause sequelae in the form of paralysis, neuropsychiatric symptoms and learning disabilities. However, the European subtype only rarely runs a fatal course.

In the 2013-2016 period, Statens Serum Institut detected 13 cases of presumed infection with TBEV (positive IgM + IgG or positive PCR); seven men and six women aged 5-68 years, Figure 1 and Table 1. Among these, ten had either encephalitis or meningitis and three had flu-like symptoms. Most people (six) had been infected in Sweden, whereas four had become infected on the Danish island of Bornholm. Three patients had become infected outside of Scandinavia after havingvisited known endemic areas such as the Czech Republic, Austria and Poland prior to the onset of symptoms. Thus, no new human cases have been detected in Denmark outside of Bornholm in this period. 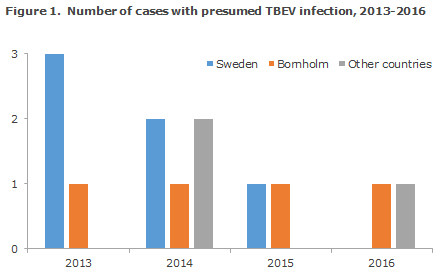 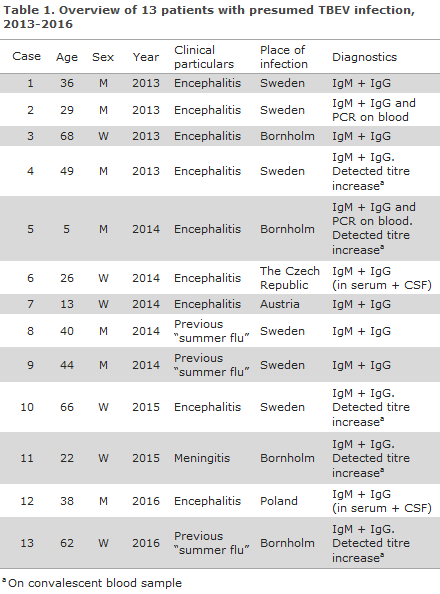 In Denmark, Bornholm is known as an endemic area for TBEV. Following the two cases diagnosed with TBE following tick exposure in Tokkekøb Hegn in Northern Zealand in 2008 and 2009, a TBEV microfocus was detected in Tokkekøb Hegn., EPI-NEWS 35/09. TBEV-positive ticks (Ixodes ricinus) were thus detected in the area in 2009 and once again in 2011. Since 2009, no TBE patients with epidemiological association to Northern Zealand have been detected. The TBE microfocus in Tokkekøb Hegn was therefore investigated once again in 2016 and 2017 to establish if TBEV-positive ticks were still present, Table 2.

Ticks were collected by dragging a 1x1 meter white flag across the forest floor (“flagging”). The collected ticks were identified using morphology and sorted into nymphs and adult males and females, respectively. RNA was extracted from pools of ticks and used in a TBEV-specific real-time PCR. This time, all tick pools were PCR-negative for TBEV. Other viruses than TBEV were found, but are not relevant in the present context.

TBE is not a notifiable disease in Denmark, but has been monitored since 2000, and the latest report describing TBE cases detected in the 2001-2012 period was published in EPI-NEWS 25/13. Apart from the cases observed on Bornholm, no new cases of TBE with presumed infection in Denmark have been detected since the two cases in Tokkekøb Hegn. Sweden was the most frequent country of infection in the 2013-2016 period, where the number of TBE cases has shown an increasing trend in incidence during the last few decades. It is therefore important that doctors consider TBE as a differential diagnosis when relevant symptoms are observed following stays in South and Central Sweden.

The ticks collected in 2016 and 2017 in the previous TBEV microfocus in Tokkekøb Hegn did not test positive for TBEV. Although TBEV was not detected in Tokkekøb Hegn in these repeated studies, TBE should still be considered in the presence of relevant clinical symptoms as new TBEV foci may appear.