This issue of EPI-NEWS describes findings of various species of tapeworm detected at the Laboratory of Parasitology, Statens Serum Institut (SSI), in the period ranging from 2005 to 2015. Some of the data reported may be considered national Danish data (see below).

Tapeworms are up to 10-meter long, thin worms whose life-cycle typically involves a larval stage, developed from eggs from so-called proglottids (segments) that are released by adult worms and ingested by a suitable host, e.g., a person. 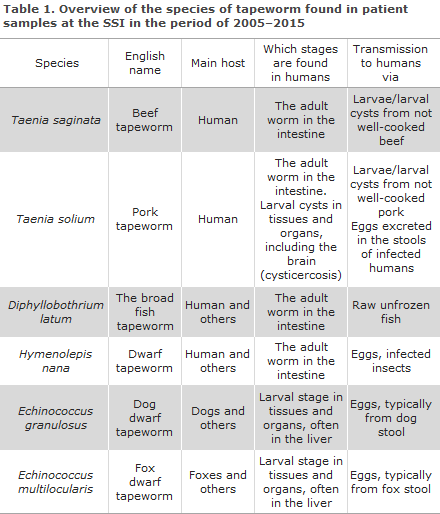 Humans are the main host of T. saginata, T. solium, and D. latum, which means that the adult worms are found in the human intestine, whereas the larval stages are found primarily in the muscle tissue of cows, pigs, and freshwater fish, which thus form part of the life cycle as intermediate hosts and therefore infectious reservoirs for humans who are infected through consumption of cysts with viable larvae in meat from these animals.

Humans are also the main host for H. nana, which is transmitted to humans via eggs in stool with or without an intermediate host (ingestion of insects infected with larvae). Specifically for T. solium, humans may also serve as intermediate hosts following ingestion of the helminth’s eggs. If larval cysts establish in the brain, neurocysticercosis may develop, causing neurological symptoms such as epilepsy. Humans may also develop larval stages for instance in the liver, following ingestion of eggs from dog or fox tapeworm (e.g., via stool-contaminated berries and vegetables); otherwise, the typical intermediate hosts are sheep, goats, pigs (E. granulosus) and rodents (E. multilocularis).

The presence of adult tapeworm in the intestine typically has little or no clinical significance. Typically, it is the larval stages that cause disease. For example, carriers of adult T. solium worms may infect themselves or others via eggs in stool or released proglottids and are thus at risk of developing neurocysticercosis because larvae (cysticerci) may develop in the brain upon ingestion of the eggs. In areas where T. solium occurs endemically, community hygiene is typically poor and characterised by free-roaming pigs, which facilitates transmission from animals to humans, but also from humans to humans.

As Taenia larval cysts, Echinococcus larvae in the liver, lungs, brain, etc., may cause focal symptoms and are therefore an important differential diagnosis of for instance liver cirrhosis and cancer of the liver.

At the SSI, tapeworm is detected using direct as well as indirect methods. Direct detection methods include macro- and microscopic detection of proglottdis from adult worms and/or eggs in the stool and so-called “hydatid sand” from E. granulosus in purulent matter extracted from cystsin the liver or other organs. DNA-based diagnosis of tapeworm in a stool sample and/or organ biopsy include PCR for Taenia and Echinococcus species. Indirect detection is performed by testing for antibodies in the blood against T. solium (“cysticercosis antibodies”), E. granulosus (“hydatid antibodies”), and E. multilocularis.

In the period of 2005–2015, stool microscopy was used by the SSI to test more than 90,000 samples from slightly more than 40,000 patients with diarrhoea (chronic, travel-associated, or in immunocompromised people) or other symptoms where screening of stool for parasites was considered relevant. Eggs/proglottids of tapeworm were found in 106 samples from 55 patients. Of these 106 positive samples, 66 were positive for H. nana. These samples had been received from a total of 30 patients with a median age of 5 years (range, 0–46 years). The remaining 40 samples were positive for Taenia species; three samples were identified at the species level, including two samples with T. saginata and one sample with T. solium. The 40 samples were from 26 patients with a median age of 26 years (range, 0–63 years). One patient tested positive for both Taenia and H. nana.

In 2011, the SSI introduced PCR testing for Taenia, and from 2011 to 2015, a total of 148 samples were tested for Taenia by PCR with subsequent Sanger sequencing, Table 2. Of these, 107 were stool samples (72%); 23 samples were from the CNS (e.g., brain biopsies) (15%), and 8 samples (5%) represented released proglottids, which had been collected and submitted for species identification. A total of 19 samples tested positive (12.8%). Eight positive stool samples were identified from a total of seven patients; all tested positive for T. saginata. Thus, the occurrence (the positive rate) of Taenia in stool samples submitted for PCR on specific suspicion of tapeworm in the intestine was 7.5%

One of the 23 CNS samples tested positive (T. solium). This sample was from a young (ethnically ) Scandinavian woman who had developed a brain abscess following a tour of Thailand. Purulent matter as well as a biopsy from the capsule wall and rinsing fluid from the abscess all tested positive by PCR. Seven of the eight submitted proglottids represented T. saginata.

The final proglottid was identified as D. latum, confirming that to a certain extent, the Taenia PCR analysis applied by the laboratory may be used for detection and identification of other genera of tapeworm in addition to Taenia. The D. latum case was detected in a younger ethnically Danish man for whom clinical information, including travel history, was not available. Two of the T. saginata-positive patients were of Danish/Scandinavian origin; the remaining patients were immigrants.

From 2012 to 2015, microscopic testing for E. granulosus was requested for a total of nine samples (bronchoalveolar lavage [BAL] or samples from cysts of the spleen, pancreas or liver), Table 3. A single sample (rinsing fluid from a cyst in the spleen) tested positive. The patient in question had immigrated from the Middle East, was strongly seropositive, and had been completely unresponsive to stimuli and suffering from cramping according to the clinical information.

Also in the period from 2012 to 2015, 40 samples (mostly biopsies from processes in the liver, lungs, and brain) were tested by PCR for Echinococcus, Table 3. A total of three samples from two patients tested positive for E. granulosus by PCR and sequencing. One of these patients was of Syrian origin and had an Echinococcus cyst in the upper lobe of the left lung, from which both BAL and a biopsy of the cyst membrane tested positive by PCR. In this patient, specific antibodies against E. granulosus had repeatedly been detected. The second patient had a hydatid cyst in the liver and was also seropositive (specific antibodies were detected against E. granulosus, but not against E. multilocularis) when the liver sample was tested; two years later, the patient was seronegative.

None of the 40 samples tested positive for E. multilocularis. 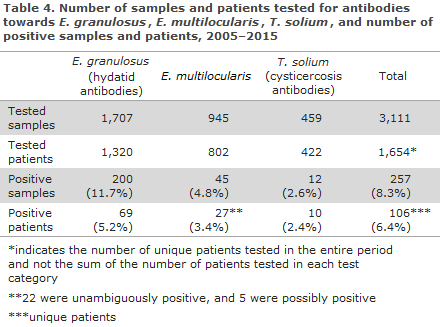 The 69 patients for whom hydatid antibodies were detected all tested positive with a minimum titre value of 1:256, corresponding to the cut-off normally used in the laboratory.

The number of samples and patients tested for hydatid antibodies and antibodies against E. multilocularis per year is presented in tables 5 and 6, respectively. 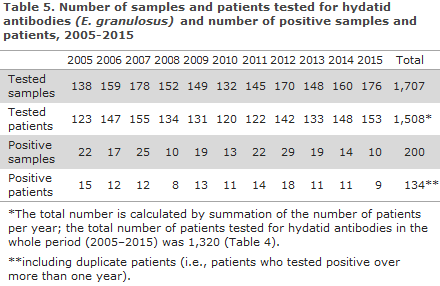 Of the 27 patients who tested positive for E. multilocularis, Table 4, 22 were probably seropositive, whereas the remaining five were possibly seropositives, since their tests returned gray-area values, which either indicates the presence of a relatively limited amount of specific antibodies or cross-reaction with other helminths. Nevertheless, experience has shown that individuals with older intact Echinococcus cysts may be seronegative. 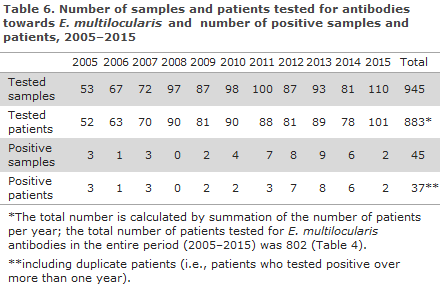 Cysticercosis antibodies were detected in 10 patients, three of whom were only slightly positive.

None of the 10 patients for whom antibodies against T. solium were detected had antibodies against Echinococcus. In contrast, nine patients tested positive or slightly positive for both E. granulosus and E. multilocularis, which confirms that some serological cross-reactivity may be encountered when testing patients infected with these worms.

Transmission of tapeworm probably does not occur in Denmark or it occurs only to a very limited extent, which is supported by the fact that most of the cases are detected in patients of other ethnic origin than Danish. It appears likely that infected ethnic Danes have typically become infected while traveling abroad.

The period saw the detection of only a limited number of T. solium cases, one of which was detected in an otherwise healthy Scandinavian woman with a brain abscess, which she had probably been developing during a 6-month round trip in Thailand. With respect to T. saginata, more infections were seen, but the number of infectees remained low; 16 cases were detected by PCR, and it is estimated that the overwhelming majority of the 40 positive samples found by microscopy of stools/proglottids were also T. saginata.

H. nana was detected in a total of 30 patients. The median age of the patients who were infected with H. nana was substantially lower (4.5 years) than the median age of patients who had become infected with Taenia (26 years). This is in line with data from prevalence studies in endemic countries, where this tapeworm is typically seen in young children. At least 11 of the 30 infectees were adopted children.

Diphyllobothrium latum occurs endemically particularly in the countries bordering on the Baltic Sea, in Eastern Europe, parts of Russia, Japan, the Philippines, and in North America. In the period of 2005 to 2015, only a single case was diagnosed in a patient for whom a proglottid from a tapeworm was submitted to species identification.

With respect to serological analysis, far more patients have been tested for antibodies against E. granulosus than against E. multilocularis The former is mainly found in Southern Europe and in areas from which Denmark has received refugees, etc., in recent years, including the Middle East, including Turkey, and North Africa. E. multilocularis is found mainly in Central and Eastern Europe, Turkey, Russia, China, Canada, and the United States. With respect to E. granulosus, the numbers of tested and positive patients have remained relatively stable and low throughout the period.

In contrast, the period from 2005 to 2008 period in particular saw an increase in the number of patients tested for antibodies against E. multilocularis, and the number of positive patients increased correspondingly. This may in part be explained by the inflow of people from endemic areas and increased attention towards Echinococcus, after it has became known that infected foxes exist in Denmark. It should be mentioned, however, that there has so far been no reports of human fox dwarf tapeworm infection acquired in Denmark, EPI-NEWS 19/12.
(C.R. Stensvold, H.V. Nielsen, The Laboratory of Parasitology, Microbiology and Infection Control)