The Regional Verification Commission (RVC) for Measles and Rubella Elimination in the WHO’s European Region assessed the regional status on elimination of the two conditions at a meeting in Bucharest in June 2017. The assessment was based on reports for 2016 forwarded by 51 of the WHO region’s 53 member states.

The Commission assessed that Denmark now meets the conditions for having eliminated measles. Elimination means that there has been no persistent circulation of measles virus in Denmark for the past 3 years (2014-2016). Elimination does not preclude imported cases with limited further transmission, but the transmission chains must be well-described, and measles virus circulation must be stopped within a maximum of 12 months. Furthermore, the prerequisite to achieving elimination is that the surveillance system is of a high quality and that the MMR vaccination coverage is high.

The elimination of measles was achieved exactly 30 years after the introduction of the MMR vaccine in Denmark in 1987. Elimination is not the same as eradication, and as the disease is highly contagious, it is still important that the MMR vaccination programme maintains a very high coverage until the disease may possibly be completely eradicated. Additionally, as part of the upcoming revision of the notification system, the disease will become notifiable by phone on the mere suspicion of measles.

The Commission has also assessed that rubella occurs endemically in Denmark. This is not because rubella cases have been notified or due to knowledge of rubella virus circulation. Rather, the Commission’s assessment is due to the fact that the disease has not been monitored systematically in the entire population as the duty to notify has so far comprised only pregnant women and congenital rubella syndrome (CRS). There have been no reports of rubella in pregnant women since 2008, and no cases of CRS have been reported since before 1994.

In the pre-elimination phase, it has made good sense to monitor the disease only among those who may suffer serious complications to the infection. Nevertheless, when an attempt is made to eliminate the disease, it is necessary to record all cases of the disease. As part of the upcoming revision of the notification system, rubella will therefore become notifiable for laboratories, and notification by phone will become mandatory already on suspicion of the disease.

Although it cannot be documented formally that rubella virus is not circulating in Denmark, there are several indications that this is, nevertheless, the case. Rubella vaccination has formed part of the vaccination programme in the same period and has enjoyed the same coverage as measles, and the rubella component of the MMR vaccine is even more effective than the measles component.

Furthermore, rubella is less infectious than measles. In theory, this should curb transmission at a slightly lower vaccination coverage (approx. 87%) than the one theoretically needed to stop circulation of measles (95% coverage of 2 MMR vaccines), but rubella transmission should also be stopped at the slightly lower recorded coverage of the MMR vaccination programme, which has now in practice eliminated measles in Denmark. .

The regional status is that 33 of 53 countries have eliminated either both measles and rubella or either one or the other disease, Table 1. 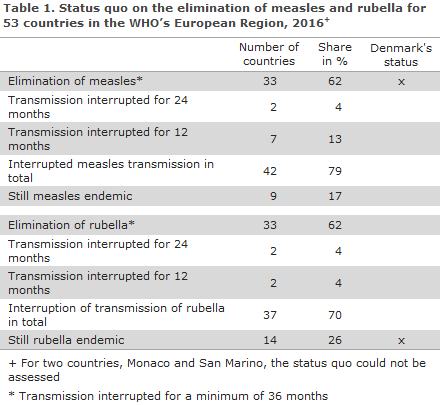 In San Marino and Monaco, the elimination process has not yet been initiated.

In connection with a major yellow fever outbreak in Brazil, the vaccination recommendation was expanded to include all travelers going to Brazil, EPI-NEWS 12/17. As no cases of yellow fever have been reported since June 2017, the Brazilian Ministry of Health declared on 7 September 2017 that the outbreak has ended.

During the outbreak, from December 2016 to 1 August 2017, a total of 777 laboratory-confirmed cases were reported. The majority of the cases were from the South-eastern region which recorded 764 cases, followed by 10 cases reported from the Northern region and 3 cases from the Central-western region of Brazil.

The recommendation concerning yellow fever vaccination for travelers going to Brazil is therefore changed to the following:
Yellow fever vaccination is recommended for all travelers above 9 months of age to areas of Brazil that are associated with a risk of yellow fever transmission, i.e. anywhere in the states of Acre, Amapá, Amazonas, Distrito Federal - including Brasilia - Goiás, Maranhão, Mato Grosso, Mato Grosso do Sul, Minas Gerais, Pará, Rondônia, Roraima and Tocantins.

Specifically, yellow fever vaccination is recommended for anyone visiting the Iguazu Falls, regardless of whether they are entering the area from Argentina, Paraguay or Brazil. The coastal cities, including Rio de Janeiro, São Paulo, Salvador, Recife and Fortaleza, are not yellow fever risk areas.

Brazil does not currently require vaccination against yellow fever for travelers from other countries.