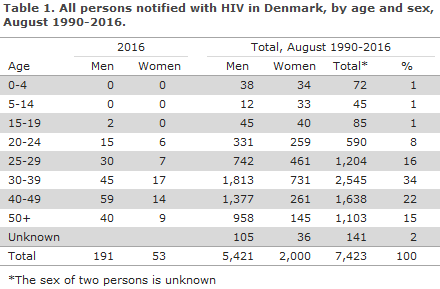 Among these cases, 62 had previously been diagnosed with HIV abroad, including 11 Danish-born persons.

A total of 45 were men and 17 were women; 22 were homosexually infected (MSM), 30 heterosexually infected (HTX), four had become infected by intravenous drug use (people who inject drugs, PWID), one was infected via mother-to-child transmission, and in five cases the route of infection was not stated. Of the 22 MSM with known HIV, 16 (64%) were from Europe or the US, whereas 18 out of 30 HTX (60%) were from Sub-Saharan Africa or Thailand.

Box 1. The estimated number of HIV positives in Denmark, the undiagnosed share and the number of cases who were tested late as per 31 December 2016

Among the 182 (146 men and 36 women) who were diagnosed with HIV for the first time, a total of 106 (58%) were Danish-born (including three second-generation immigrants), and 76 (42%) were immigrants.
Among the 76 immigrants, two were notified as victims of human trafficking and/or stayed in Denmark illegally and four were tourists.

Five were from sub-Saharan Africa and one from Western Europe.

Among the 36 women with newly diagnosed HIV, seven were detected as part of the general screening of pregnant women. Four were from Africa, two from Eastern Europe and one from Denmark.

An increase was observed in the number of notifications of persons from Eastern Europe, Figure 1. 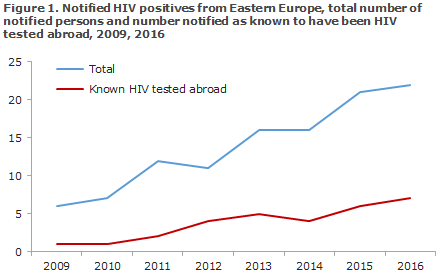 Among the 70 immigrants, 19 (26%) stated that they had become infected in Denmark; 15 MSM, 3 HTX and 1 PWID. These 19 people were from 19 different countries of origin across the globe. Figure 2 presents immigrants infected in Denmark, by mode of infection and year of diagnosis. 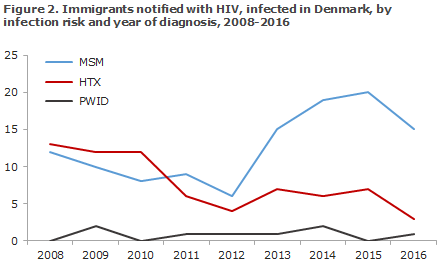 Among the 182 persons who were diagnosed with HIV for the first time, 100 were MSM, 71 HTX and 5 PWID. In six cases, the mode of transmission was unknown.

Four of the 100 MSM were diagnosed at the initial tests made as they were included in a PrEP project (PrEP, pre- exposure prophylaxis, preventive antiretroviral treatment for HIV-negative people).

The distribution on origin and mode of infection for persons notified as having been infected in Denmark and abroad, respectively, is presented in Figures 3a and 3b. 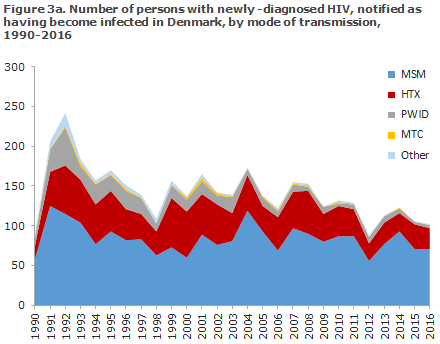 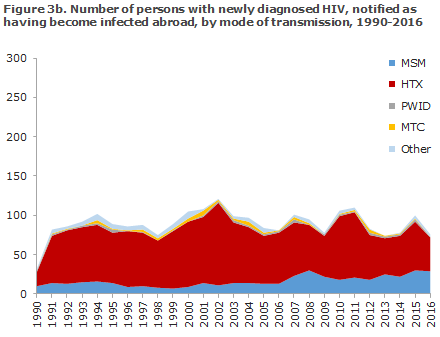 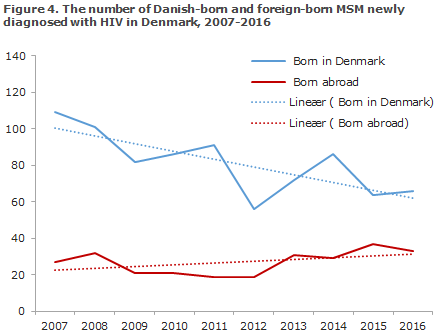 Table 2 shows the distribution by area and region. A total of 104 (57%) resided in the Capital Region of Denmark. 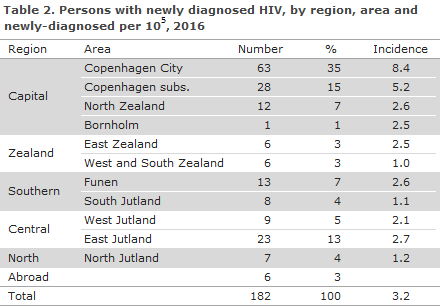 The age distribution among newly diagnosed, Danish-born MSM has fluctuated somewhat over the past five years, Figure 5. In 2016, 42 of the 67 Danish-born MSM (63%) were 40 years of age or more. 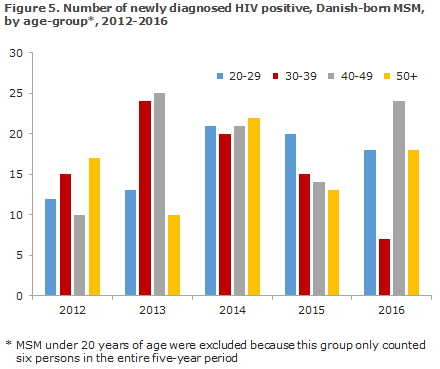 Among the 182 persons who were diagnosed with HIV for the first time, information was available for 174 (96%) about their CD4 count at their diagnosis and/or recent infection (negative test and/or acute HIV disease) or about AIDS at their diagnosis. In the remaining eight cases, CD4 counts were unavailable.

The CD4 count is a marker that indicates how the HIV virus affects the cellular immune response. For a long period of time, a CD4 count below 350 cells per µl blood has been indication for initiation of highly active antiretroviral therapy (HAART) in Denmark if the patient had not wanted to initiate such treatment earlier. In November 2015, the guidelines were changed so that everyone who is diagnosed with HIV is offered to start treatment immediately, regardless of the CD4 count at the time of diagnosis. CD4 counts below 350 and/or AIDS at the time of diagnosis are still used in this report as a marker for late testing.

Among the 174 cases for whom the CD4 count was stated, 81 (47%) had CD4 counts below 350 cells per µl at diagnosis, including 8 persons assessed as newly infected based on primary HIV disease and/or a recent negative HIV test, whereas 93 (53%) had CD4 counts of 350 or above. 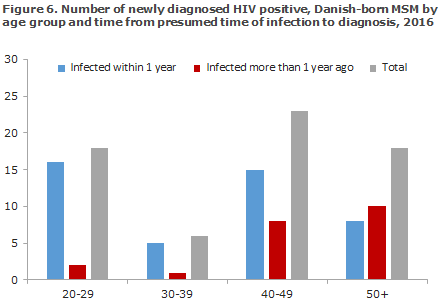 Among 182 newly-diagnosed persons, a total of 27 (15%) were diagnosed with an AIDS-defining condition concurrently with their HIV diagnosis, including 18 HTX, 6 MSM, 1 PWID and 2 for whom the mode of infection remained unknown. Furthermore, 12 persons who had previously been diagnosed with HIV were now notified with AIDS. For these persons, the period from HIV diagnosis to AIDS diagnosis lasted from 9 to 24 years. The most frequently seen AIDS-defining diagnoses were Pneumocystis jirovecii pneumonia (15 cases) and pulmonary tuberculosis (5 cases).

Checkpoint is the Danish AIDS Foundation's test sites for MSM and immigrants. Here, you can be tested for HIV and syphilis without scheduling an appointment and you will receive the results immediately. A total of 17 of the 182 newly diagnosed (9%) persons were tested at a Checkpoint, 9 Danes and 8 immigrants. Of these, 15 were MSM, 2 were HTX (1 man and 1 woman). Thus, 15% of the 100 newly diagnosed MSM were established via a Checkpoint.

This report comprises all HIV patients who were included in the SERO project in the 2014-2016 period, for whom it was possible to sequence the POL gene in hiv-1. The group counts a total of 421 patients of whom 409 have been diagnosed with HIV in Denmark, which corresponds to between 62% and 71% of all HIV patients diagnosed with HIV in Denmark in the period.

Previous reports on resistance mutations in EPI-NEWS have been based on a list prepared by the WHO and published in 2009. There is broad agreement that the list is no longer adequate as new antiviral drugs have since been introduced and as new knowledge has appeared about the clinical consequences of resistance mutations. Therefore, the sequences from patients infected both in Denmark and abroad in the 2014-2016 period have been examined using the HIVdb algorithm from Stanford University. The algorithm is used to identify and score current clinically relevant mutations. The list that forms the basis for the HIVdb predictions has been updated a total of 16 times since 2009. Sequences from newly diagnosed persons were used as follows; 143 in 2014 (91 infected in Denmark and 52 infected abroad), 134 in 2015 (68 infected in Denmark and 66 infected abroad), and 118 in 2016 (69 infected in Denmark and 49 infected abroad). Included were all mutations scoring 10 or more, which corresponds to a potentially low level of resistance. 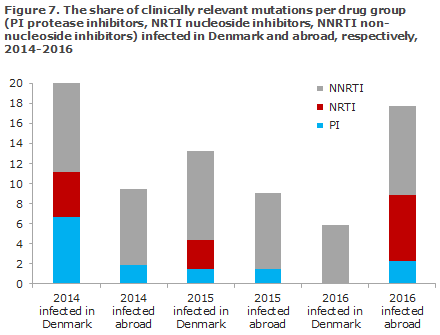 Among newly diagnosed HIV 1 patients who have been infected in Denmark, hiv-1 of subtype B comprised 75% in 2016, whereas among patients infected abroad it only comprised 31% (Figure 8). It also appears that the recombinant subtype CRF01, as well as other rare types and types which are not specified here are three to four times more frequent in patients infected abroad than in patients infected in Denmark. The imported types may subsequently give rise to spreading of infection in Denmark. Ongoing studies aim to identify the occurrence of, among others spreading, resistance and risk groups in infection clusters. 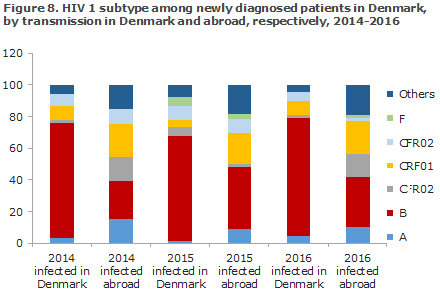 The number of notified HIV cases in 2016 was in line with the numbers recorded in the previous years, and MSM and immigrants who were HTX-infected with HIV before their arrival in Denmark remained the main infection groups. Among MSM, the majority of the newly diagnosed were more than 40 years old.

A gradual increase was observed in the number of persons notified with HIV from Eastern Europe. In 2016, this group constituted almost a tenth of all cases. In Eastern Europe, HIV is increasing uncontrollably, unlike all other regions worldwide.

Despite considerable test activity, not least at the Checkpoints, a high share of the newly diagnosed cases are tested a long time after having become infected; this trend is seen not just for heterosexually infected individuals, but also among MSM. MSM should be tested for HIV annually, and the MSM who lead an active sex life and do not consistently use a condom should be tested for HIV and the remaining sexually transmitted infections more frequently, e.g. every three months.

It is our hope that more of the relevant, exposed persons will be tested if the testing options are enhanced. This may be done by introducing home-testing of by increasing the number of test sites. For example, the Infectious Medicine Outpatient Clinic at Hvidovre Hospital has introduced a quick test offer that allows people to get their rest result immediately even if they come in without an appointment.

More initiatives may contribute to reducing the infection pressure in Denmark. If the test activity increases and if it is targeted towards the right persons, the new guidelines on treatment immediately after the diagnosis will reduce the infection pressure, as well-treated HIV positives cannot pass on the infection to others (known as TasP, Treatment as Prevention). Another initiative is PrEP, which is offered in more and more countries, and which is currently being studied in a pilot project in Denmark. In connection with inclusion of MSM into this project, several MSM were diagnosed with HIV during the initial tests, which goes to underline the interest in and need to employ this prophylactic method. Condoms remain a good preventive method, not only for HIV, but also to avoid most other sexually transmittable diseases.

Even though several biological and technical methods are available in the efforts to reduce the infection pressure in Denmark, HIV remains shrouded in ignorance and stigma, and stigma has been identified as the a cause why persons who are aware that they are at risk of being HIV positives choose not to be tested. It is more important than ever to endeavour to overcome ignorance and stigma, both in the general population and particularly in the affected communities. The question is if the solidarity seen among MSM when HIV was a shared problem that caused the death of your loved ones has given way to a more individualistic perception of the disease. This is, among others, suggested at dating sites for MSM, where a preference for HIV negatives is expressed. It is important that MSM become aware that those who are diagnosed as HIV positives in the vast majority of cases are well-treated and therefore do not constitute a risk for transmission of the infection. The focus needs to be shifted to those who believe that they are HIV negatives, but who have had unprotected sex after their latest HIV negative test, as the largest share of HIV infectees transmissions in Denmark involves non-diagnosed HIV-positive people.

Among the newly diagnosed HIV positives who had been infected in Denmark, nearly 6% of the tested positives had transmitted resistance (TR) to one of the three primary ARV treatment groups that are used for highly active antiretroviral therapy (HAART). Thus, a continued decrease has been observed in the resistance acquired in Denmark. Conversely, nearly 18% of those who had become infected abroad were resistant in 2016. This constitutes an increase with respect to previous years. In 2016 only one patient was resistant to two ARV treatment groups. Therefore, there are currently no major problems with respect to effective treatment. Not least due to the increase observed in the occurrence of resistance in persons who have become infected with HIV abroad, it is still important to monitor TR in Denmark.

The vast majority of those diagnosed with HIV in Denmark are referred to and followed at one of the 10 departments of infectious medicine. CD4 cell counts, viral load, AIDS and death will beare used as endpoints for assessment of HIV treatment. The endpoints show that diagnosed HIV positives in Denmark are very well treated. These indicators are published in annual reports from the Danish HIV Cohort Study (Det Danske Hiv Kohorte Studie (DHK) and DANHIV, and are available on the internet.

The efforts made to collect and update epidemiological information are carried out regularly between the EPI-NEWS reports; and minor changes to previous data may therefore occur as our knowledge improves. At the web site of Statens Serum Institut, you will find continuously updated data including any received notifications of HIV and other conditions.