Screening of pregnant women for hepatitis B, HIV and syphilis, 2016

Screening of pregnant women for hepatitis B, HIV and syphilis, 2016

General screening of pregnant women for hepatitis B was introduced on 1 November 2005, EPI-NEWS 41/05, while screening for HIV and syphilis was initiated as from 1 January 2010, EPI-NEWS 27-33/10. The general practitioner's tasks in relation to the screening are presented in Table 1. 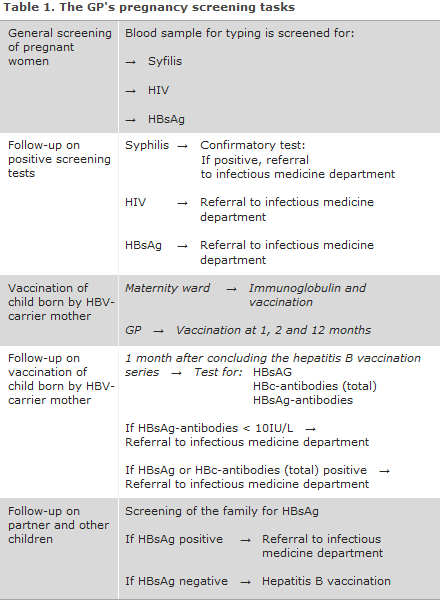 A very limited number of women decline having the tests made, and laboratory error accounts for the majority of missing tests, Table 2. 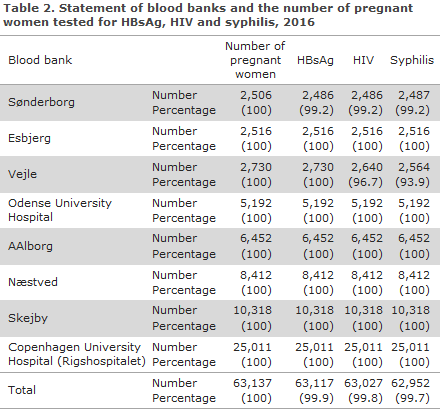 Of the 63,117 tested pregnant women, a total of 203 (0.32%) were HBsAg positives, which is at par with the level observed in previous years. A positive HBsAg (hepatitis B surface antigen) indicates a current acute or chronic hepatitis B virus infection.

The Department of Infectious Disease Epidemiology and Prevention at the SSI sends out reminders for notification of hepatitis B if no current or previous notification has been made. Therefore, all except for five pregnant HBsAg positives were reported to the statutory national notification system in 2016. The five positives who were not reported were either lost to follow-up (three) or their notification was pending (two) despite reminders.

The remaining 104 women (51%) had already tested HBsAg positive at previous testing sessions.
HBeAg, a marker for disease activity associated with an increased risk of intrauterine mother-to-child infection, was detected in 20 (10%) of the women.

Twenty women had not been tested for HBsAg in the pregnancy screening. All belonged to Sønderborg Blood Bank, Table 2. 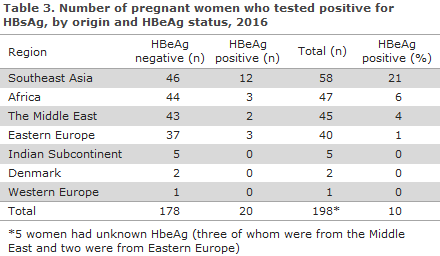 Since the introduction of the general screening for hepatitis B, the number of children infected with hepatitis B at birth in Denmark has decreased considerably, Figure 1. In 2016, no children below 18 years of age were notified as having become infected at birth in Denmark. Four children were notified as having become infected abroad; three were from The Middle East, and one child was from Sub-Saharan Africa. 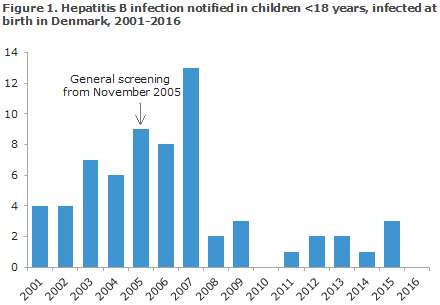 A total of seven women had newly detected HIV and 33 were known HIV positives.

Among the newly detected HIV-positive pregnant women, four were from Africa, two were from Eastern Europe and one was from Denmark, Table 4. Four had immigrated in 2016 and one in 2012 and 2013, respectively.

The other woman was tested in her 39th week for HIV due to symptoms. She tested HIV positive at this time after having tested HIV negative in the beginning of her pregnancy.

Among the 62,952 pregnant women who were screened for syphilis in 2016, 123 tested positive. The majority of these were false positives or had antibodies from previous syphilis. The confirmatory test makes it possible to identify both the false positives/previously infected cases and the pregnant women who currently have syphilis. Confirmatory serological tests were performed in 122 of the women (99%). Current syphilis was established in 12 of these cases, corresponding to 0.02% of all the screened pregnant women.

Among the 12 positives, 6 were of Danish origin, 1 was from Greenland, 1 from Germany, 1 from Somalia, 1 from Pakistan, 1 from the Congo and 1 from Montenegro. Ten of the 12 women were notified via the statutory national syphilis notification system. One woman did not have the confirmatory test performed despite several requests from the SSI to do so.

One case of congenital syphilis was notified in 2016. The case occurred in a child whose mother was Greenlandic. She had arrived to Denmark one week before giving birth and had therefore not been tested in the pregnancy screening. Syphilis antibodies were detected in one neonate whose mother had tested positive for syphilis in the pregnancy screening. Maternal antibodies were detected, and the child was not treated for syphilis.

When a woman tests positive in the pregnancy screening, it is important to confirm the test in question and to refer her to a specialist/outpatient clinic, but also to follow up on the woman’s partner. The two pregnant women who became infected with HIV during their pregnancies and the pregnant woman who had syphilis detected late in her pregnancy (EPI-NEWS 22/23 2014) show that it may be relevant to test pregnant women from at-risk populations, including women from high-endemic HIV and/or syphilis areas, repeatedly during their pregnancies. Nevertheless, it would not make sense to introduce more tests into the general pregnancy screening in Denmark.

The general screening of pregnant women may still be considered a success. Not only are nearly all cases of mother-to-child infection with the three conditions prevented in Denmark; pregnant women who were unaware that they had become infected can also be tested and treated. However, only those pregnant women who are examined by a physician during their pregnancy can make use of this offer.

Pregnant women who stay in the country illegally may be examined by a physician at a Red Cross health clinic in Copenhagen or Aarhus.

Here, pregnancy screening is also offered, but this service does not form part of the public offer of care for childbearing women. If a woman in labour of unknown status arrives at a maternity ward, the ward shall perform tests for syphilis, hepatitis B and a rapid HIV test.

In 2016, 6 out of 12 of the pregnant women with syphilis were of Danish origin. This shows that, in Denmark, syphilis is not exclusively a condition that occurs among homosexual men; it has been re-introduced among heterosexual persons.

As the syphilis screening tests made among pregnant women produce many false positive test results, a full serological testing (confirmatory test) is required of anyone who tests positive in the screening.

It is important that the treating physicians refer any pregnant women who have been diagnosed with one of the three infections in the screening to the relevant specialist departments, even if the woman in question has no symptoms of infection, Table 1. In pursuance of the Danish Health Authority's guideline on general screening of pregnant women for infection with hepatitis B, HIV and syphilis, the pregnant woman's partner and other children should have blood tests performed.

According to the Danish Health Authority’s guideline on HIV, hepatitis B and C virus published in 2013, all children born by carrier mothers who receive hepatitis B vaccination at birth and subsequently at the GP should be tested to confirm that the vaccination has taken and to test for current infection one month after the vaccination series has been concluded, i.e. when the child is 13-15 months old.

This recommendation is based on studies demonstrating that inter-uterine infection does occur in some children, in which case the vaccine is ineffective. It is the responsibility of the GP to perform this test. If the child has become infected or is insufficiently protected despite the vaccinations, the child is referred to a specialist department. Statens Serum Institut sends out reminders to the GPs about hepatitis B vaccination of children born by hepatitis B-infected mothers, and about subsequent testing of these children.