Another two cases of measles on Zealand
Chlamydia 2016

Another two cases of measles on Zealand

Statens Serum Institut has detected another two cases of measles in persons residing in South and Central Zealand, respectively.
One of the two, a younger man from South Zealand, fell ill halfway through Week 33 and was admitted to Slagelse Hospital and subsequently transferred to the Infectious Medicine Department of Roskilde Hospital.

The other, a man in his thirties, fell ill towards the end of Week 33 and was admitted to Køge Hospital and subsequently transferred to the Infectious Medicine Department of Roskilde Hospital.

The MMR vaccination status of both patients is uncertain. No information about previous travels abroad or contact to other measles infectees was provided, but genotyping of virus isolated from the first of the two new cases was determined to be of type D8 and 100% identical with the measles virus detected in the patient described in EPI-NEWS 28-33/17. The Danish Patient Safety Authority, Division for Supervision and Guidance East, was informed as soon as a positive diagnostic had been reached and has implemented relevant preventive measures.

Doctors, particularly on Zealand, are encouraged in weeks to come to be particularly attentive to patients who present with symptoms that are consistent with measles. The disease presents as a severe cold with coughing, photo-phobia and a high fever. Small whitish spots (so-called Koplik spots) are observed in the mucosa of the mouth in this course. After 3-4 days, a temporary recovery is observed.

Typically, after a few days, the patient deteriorates due to a new spell of fever accompanied by the classic measles rash (approx. 13-14 days after infection). The rash starts behind the ears and, in the course of a few days, spreads downwards across the neck and trunk to finally appear on the patient’s arms and legs. The patient is contagious approx. 4 days before and after the appearance of the rash. Fore a more detailed description, please go to SSI's Disease Dictionary (in Danish).

Another two samples were received at Statens Serum Institut today and are currently being tested for measles.

Up to and including 2015, the laboratory notification system for chlamydia (oculogenital infection caused by Chlamydia trachomatis) was based on the statutory quarterly submission of data on laboratory-confirmed chlamydia made by the clinical microbiology departments and in recent years also from one clinical bio-chemistry department. For 2015 data were also obtained via The Danish Microbiology Database (the MiBa) (miba.ssi.dk). The differences between the two methods is described in EPI-NEWS 34/16. Data for 2016 onward are retrieved exclusively from the MiBa. The chlamydia report provided at Numbers and Graphs (Danish Tal og Grafer) has been MiBa-based since 1 January 2015.

The data comprise all positive and negative results from chlamydia tests from one department of clinical biochemistry and from all departments of clinical microbiology (DCMs) extracted from the MiBa. The data include the patients’ civil registration number , and disease episodes can therefore be delimited to the individual level. A new disease episode is defined by an interval exceeding 42 days between two positive test episodes. Several negative test results within a single year are counted as a single negative testing episode. Information about residence and therefore area is extracted from the Danish CPR register. In the current annual report for 2016, numbers from 2015 are often provided to allow for comparison. Due to continuous updates made to data in the MiBa, each of these numbers differ marginally from the corresponding numbers published in EPI-NEWS 34/16.

The extent of chlamydia testing performed in private laboratories who market themselves via the internet remains unknown. Such data are not included in the annual report.

When rectal chlamydia is established or when lymphogranuloma venereum (LGV; EPI-NEWS 20/08) is suspected, some DCMs and STI clinics submit material to the SSI for relevant specialised testing.

In the 2004-2015 period, chlamydia monitoring was based on quarterly reports from the laboratories; and when calculating the positive rate, the denominator used was the number of analyses made. With data extracted from the MiBa as from 2010, the number of persons tested is used as the denominator. Therefore, the previously reported 9% positive rate from 2015 is not directly comparable with the MiBa-based positive rates of 12.9% in 2016 and 12.3% in 2015. 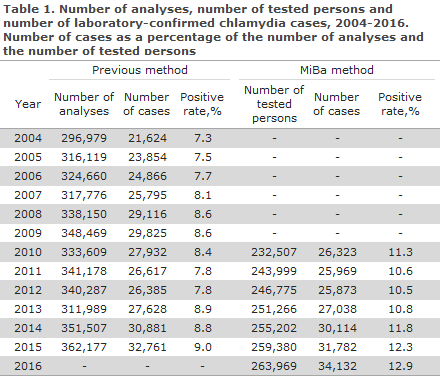 Distribution of cases and incidence by sex and age group are presented in Table 2. Men accounted for 40% of the diagnosed cases. 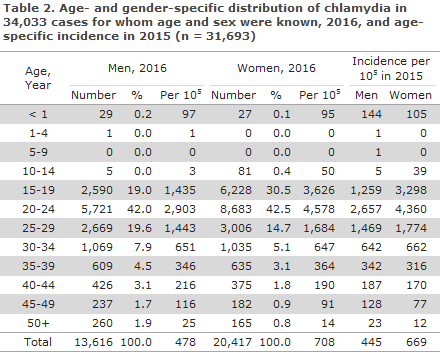 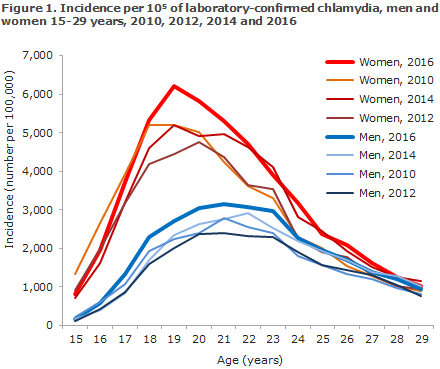 Both overall and in the majority of areas, the incidence increased for both sexes in 2016 compared with 2015, Table 3, even though it decreased on Bornholm and for men in West and South Zealand. The ratio between the incidence for men and women remained practically unchanged in the country overall and in several areas. It increased in Copenhagen subs., North Zealand and on Funen, but decreased on Bornholm in West and South Zealand and in West Jutland. 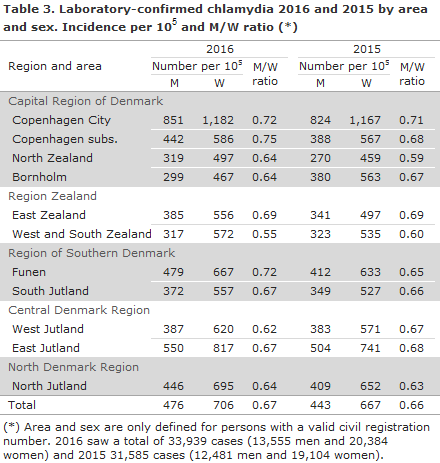 Among the positive samples 92% were submitted by general practitioners and 7% by hospitals. All cases were detected using nucleic acid amplification techniques. All laboratories reported positive findings in urine samples.

Urogenital chlamydia was detected in one 12-year-old, and five 13-year-old and 75 14-year-old girls and in five 14-year-old boys.

Age groups and sexes
As previously, the incidence of tested persons was considerably lower among men (2,651 per 105) than among women (6,535 per 105), Table 4, except for 0-year-olds and 50-year-olds. Nevertheless, the number was higher in 2016 than in 2015, except for women aged 20-29 years and children aged 10-14 years. Conversely, the positive rate was considerably higher in men in most age groups and it increased, particularly in the age group of 15-24-year-olds, for both sexes. 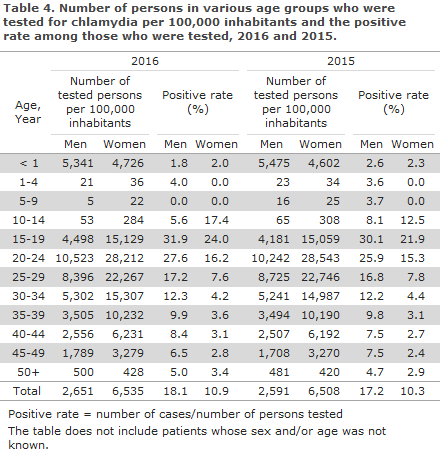 Both overall and in most areas, the number of tested men per 105 increased compared with 2015, Table 5. However, a decrease was observed in Copenhagen City and on Bornholm, and for women also in North Zealand and South Jutland. The positive rate among women increased in all areas, and increased among men or remained largely unchanged in most areas, except for a considerable decrease on Bornholm. 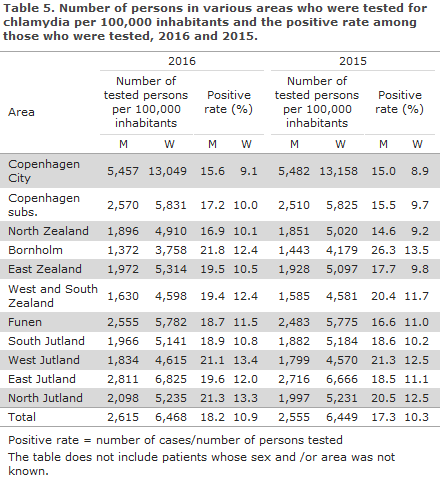 The incidence of rectal testing of men, Table 6, increased considerably from 2015; from 96 to 112 per 100,000. As in 2015, considerable geographic variation was seen with respect to testing activity. The highest level of activity (and the highest increase in activity) was seen in Copenhagen City, on Funen and in East Jutland, i.e. areas that comprise large cities with many educational institutions and STI clinics. Positive rates also showed variation, although to a far lesser extent. In comparison with 2015, the greatest decrease (in percentage points) was observed in Copenhagen subs. and the greatest increase on Funen.

Material was submitted for LGV testing from 409 patients; 281 men and 128 women. Ano-rectal samples were taken in 235 and 95 cases, respectively. The geographical distribution was as follows: 370 from Copenhagen City, 20 from Funen, 17 from East Jutland, and two from West and South Zealand. LGV was detected in 42 men aged 23-68 years (in 39 ano-rectal samples, one genital sample and two of unknown type), and in two women aged 19 and 25 years (one ano-rectal and one genital sample). 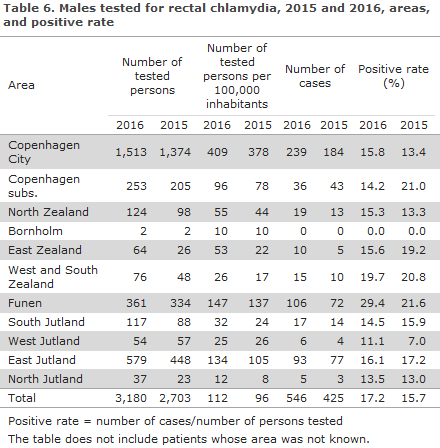 More than twice as many women as men were tested for chlamydia, but the men’s share of the detected cases is 40%, and the share of samples in men that tests positive for chlamydia is considerably higher in nearly all age groups than among women. Increased testing of men should therefore also be encouraged in the future.

The number of men who had rectal chlamydia detected increased further compared with 2015, but considerable geographical differences exist with respect to how often rectal samples are taken. When rectal chlamydia is found in men, these should be tested for HIV, syphilis and gonorrhoea, and the sample material should be tested for the variant of C. trachomatis that may cause lymphogranuloma venereum, EPI-NEWS 20/08.

The clear increase in the incidence of chlamydia is cause for concern as it is a marker for the extent of unprotected sex, which also entails a risk of other sexually transmissible diseases. There are therefore grounds for further enhanced preventive action, especially among 15-24-year-old men and women. Increased attention is warranted on information about safe sexual behaviour, increased sampling activity and partner information in case of positive findings.