In 2016, a total of 101 cases of imported malaria were notified by Danish laboratories to Statens Serum Institut, Table 1.

Among the cases with a species-specific diagnosis (100 cases), 57% (57/100) were caused by Plasmodium falciparum, 38% (38/100) by Plasmodium vivax and 4% (4/100) by Plasmodium ovale, whereas 1% (1/100) of the cases were due to Plasmodium malariae. Overall, the falciparum malaria cases were almost exclusively imported from Africa, 96% (55/57). Among the African cases, 66% (55/83) were caused by falciparum malaria, whereas 28% (23/83) of the cases were caused by vivax malaria, all of which were seen in travellers from Eritrea and/or Ethiopia. The majority of these cases were described as refugees from Eritrea. The malaria cases that were imported from Asia were all caused by vivax malaria, acquired during stays in Afghanistan, Pakistan or India. No cases of vivax malaria were recorded from South-east Asia. The four cases of ovale malaria and the single case of malariae malaria were all from Africa.

The overall median age for the reported malaria cases was 30 years (range 2 to 73 years). Men comprised 61% (62/101) and women 39% (39/101) of the cases. Disregarding the group of cases imported from Eritrea, the median age was 31 years, whereas the median age among the cases who arrived from Eritrea/Ethiopia (a total of 24 cases) was 19 years, including eight children below 12 years of age. 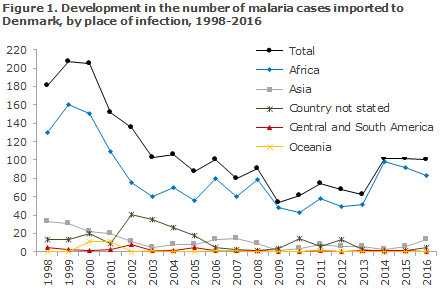 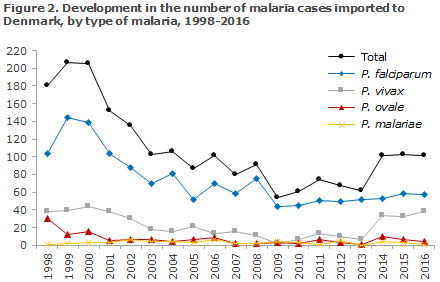 In connection with the annual revision of the Danish recommendations for travel vaccination and malaria prevention, the SSI’s reference group for this field has, among others, focused on the most recent many years with low numbers of malaria cases from Asia, particularly the South-east Asian countries (e.g. Myanmar, Thailand, Cambodia, Laos, Vietnam, Malaysia, Singapore, Indonesia and the Philippines) among which several receive a considerable and growing number of Danish tourists. Similarly, from the countries in Central & South America that have some risk of malaria, very few cases of malaria are imported.

Table 2 and Table 3 present the total number of reported malaria cases imported from Asia and Central & South America, respectively, in the past 10 years (2007-2016), by country of infection and type of malaria.

A total of 69 malaria cases were imported from Asia in the period, of which the majority were caused by vivax malaria, 90% (62/69). Of these 69 cases, the majority, 90% (62/69), were imported from only three countries: India, Afghanistan and Pakistan; and the cases were mainly seen in persons of non-Danish origin. Only seven cases were reported from travellers returning from countries in South-east Asia: Thailand, Indonesia and Myanmar, distributed according to both vivax and falciparum malaria. No malaria cases were seen from the remaining Asian countries.

In the same 10-year period, only eight cases of malaria were reported in travellers who had returned from Central & South America; five cases of vivax malaria and three cases of falciparum malaria. The travellers were presumed to have become infected in Brazil, Peru, Bolivia, Guatemala and Honduras, respectively, even though it is not known exactly where in the mentioned countries.

Updated and revised recommendations for malaria prophylaxis, especially for South-east Asia and Central and South America, will follow in next week's EPI-NEWS.

The number of malaria cases notified as having been imported to Denmark in 2016 was in line with the numbers reported the past few years, approx. 100 annual cases.

As in 2014 and 2015, the high occurrence of vivax malaria among regfugees from Eritrea is of note. But whereas 2014 and 2015 mainly brought malaria cases in young male adults, 2016 also saw a high occurrence of children from Eritrea with vivax malaria. Presumably, the travellers were either infected in Eritrea or while travelling through Sudan or Ethiopia. It is possible that some of the patients received initial malaria treatment earlier in the course of their disease in the form of a schizonticidal drug (e.g. artemether/lumefantrine or atovaquon/proguanil) and therefore temporarily recovered, but that vivax malaria later reappears in these patients due to a lack of radical subsequent treatment with primaquine.

Furthermore, it is likely that several of the fugitives arriving from Eritrea have had undiagnosed vivax malaria for an extensive period of time, which in semi-immune adults may present as a prolonged infection that initially entails only mild and unspecific symptoms, but which in the longer run may develop into more serious disease. Furthermore, it is important to be aware that vivax malaria will often present with symptoms only several months after the time of infection, and that the disease cases may therefore be recorded long after the patient has arrived to Denmark. The relevant healthcare workers therefore need to be specially attentive to refugees from Eritrea who should be allocated relevant and rapid laboratory testing for malaria in case of even minimal clinical suspicion of the condition. Additionally, it must be ensured that the patients also receive supplementary radical vivax treatment in the form of primaquine. Prior to primaquine treatment, it must, nevertheless, be established that the patient does not suffer from congenital glucose-6-phosphate dehydrogenase (G6PD) deficiency.

If the numbers are adjusted for the group of refugees from Eritrea, the number of reported malaria cases in 2016 was roughly in line with the low level seen in recent years. As previously, the problem for common travellers is by large the risk of becoming infected with serious falciparum malaria in Africa, whereas the risk of malaria outside of Africa is very limited and due mainly to vivax malaria. Immigrants and their children who visit their countries of origin generally constitute the main risk group, as these persons typically stay for longer periods of time with their family and sometimes in areas with a considerable local risk of malaria. Thus, a relatively high number of malaria cases continues to be imported from Asia, from three countries in particular; India, Afghanistan and Pakistan. On the other hand, only very few malaria cases are seen among travellers returning from the remaining parts of Asia, including the majority of South-east Asia, despite the large number of Danish tourist travellers to several of these countries. Furthermore, only very few cases of malaria are observed in travellers returning from Central & South America, where the risk of becoming infected with malaria as a traveller should therefore be considered very low.

In this case study, we describe a severe case of Plasmodium falciparum infection in a 47-year-old previously healthy Danish male with connection to a farm in the South African Limpopo province. The farm is located by Messina close to the Limpopo River, and not far from the border with Botswana, in an area of the Limpopo province for which malaria prophylaxis is normally not recommended. The patient has visited the farm several times previously with his family without using malaria prophylaxis. During the current trip, the patient used mosquito repellent exclusively, and slept in air-conditioned rooms, but with open windows with no insect nets.

The current stay at the farm lasted for two weeks in April, except for a one-day stay in Botswana close to the South African Border. The patient was in good health throughout his entire stay.

One day after returning to Denmark, the patient presents with fever and a dull pressure sensation above his forehead and maxillary sinuses, and an acquaintance of his who is a doctor starts him on antibiotics on suspicion of sinusitis. The following days, the patient also presents with headache, pain in the eyes and difficulty breathing. The patient is admitted acutely with chest pain five days after returning. At the admission, the patient is awake and lucid, but runs a high fever of 39 0C. He has normal blood pressure, tachycardia, increased respiratory frequency, decreased oxygen saturation of 97% on nasal oxygen, 2 l/min. Coronary enzymes are elevated, but his ECG is without signs of acute coronary syndrome. Furthermore, blood samples show increased infection counts, marked thrombocytopenia and moderate liver and kidney affection. No anaemia is observed, but increased LDH and bilirubin are recorded as signs of initial haemolysis.

The patient is transferred to the infectious medicine department on suspicion of malaria. Malaria smears show Plasmodium falciparum at a parasitaemia degree of 6.1%. Treatment for severe falciparum malaria is initiated with intravenous artesunate. After one day of treatment, the degree of parasitaemia has increased to 13%, but then decreases rapidly and the patient concludes treatment with oral artemether-lumefantrine. Negative malaria smears are observed on Day 7 and 28 after concluding the treatment, but persisting signs of haemolysis with a haemoglobin decrease to 3.9 mmol/l is seen, why the patient receives a blood transfusion.

One month after the treatment, the patient continues to experience fatigue, but is otherwise in general well-being, and with normal haemoglobin.

It is well-described that some patients have haemolysis after treatment for severe malaria with artesunate. The travel history and case story is a reminder that all travellers to areas with a potential risk of malaria should be advised to apply mosquito-bite prophylaxis, and that - if they run a fever up to 3 months after returning - they should undergo medical examination without delay. In the Limpopo Province in South Africa, the risk is normally larger in the eastern part, where the Kruger Park is located; but following heavy rainfall, 2017 has seen an increasing number of malaria cases also in the North-western area of the province, which is normally risk-free. This underlines the fact that malaria transmission is dynamic and can be affected by local climate conditions.