The 2016/17 influenza season was characterised by early rise in the influenza activity and by the fact that A (H3N2) was the predominant virus. This led to a prolonged season with the highest number of admitted influenza patients since 2010/11, and a markedly increased excess mortality among elderly people.

From Week 40 in 2016 to Week 20 in 2017, the occurrence of influenza-like illness (ILI) was reported to the sentinel surveillance by an average of 101 GPs weekly, compared with 122 in the previous season. The ILI occurrence was also followed daily via the nationwide surveillance performed by emergency call service physicians and also via the 1813 Helpline in the Capital Region of Denmark.

The occurrence of laboratory-confirmed influenza was monitored via the Danish Microbiology Database (MiBa), and the occurrence and any changes in the influenza virus were monitored via samples submitted to the National Danish WHO Influenza Centre for WHO at Statens Serum Institut (SSI).

Since 2014/15, serious influenza has been monitored through weekly data capture from existing registers. Patients diagnosed with influenza are identified in the MiBa; and information on admission to hospital, intensive care therapy and underlying conditions is collected from the National Patient Register. Furthermore, vaccination information is collected from the Danish Vaccination Register and information on fatalities from the Danish Civil Registration Register (the CPR Register). Information from the same sources is used for the calculation of vaccine effectiveness. Mortality in the population in general is assessed through weekly collection of information on deaths from the CPR Register.

The share of patients who contacted their GP for ILI rose from week 52, 2016, through week 9, 2017 and reached mid-level in weeks 4-7. By comparison, in the previous season the influenza activity only increased as from Week 5. Both in the sentinel and the emergency call physician’s surveillance, the influenza activity was lower than in the previous season and substantially lower than in the latest season that was dominated by influenza A (H3N2), i.e. the 2012/13 season, Figures 1 and 2. 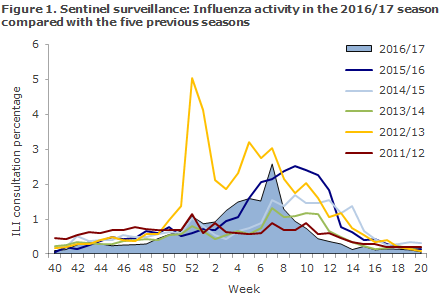 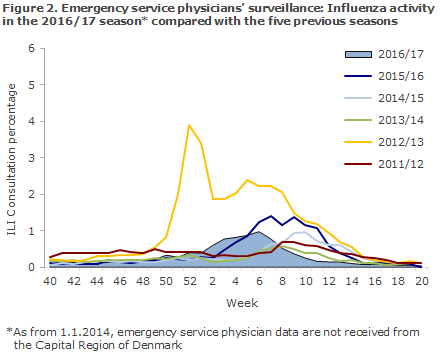 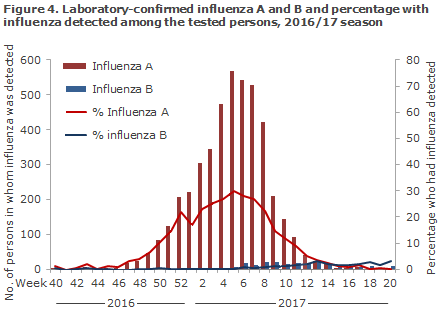 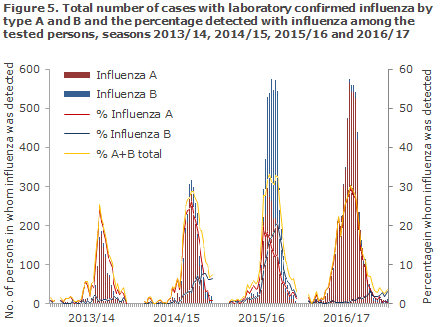 In the course of the season, the National Danish WHO Influenza Centre at the SSI tested a total of 2,326 influenza samples, including 368 submitted by the sentinel physicians, 164 diagnostic samples submitted for diagnostics by GPs and other laboratories, and 1,780 surveillance samples submitted by departments of clinical microbiology. Among these, 1,943 patients tested positive for influenza virus of type A or B.

The distribution of patients by identified virus strains is presented in Table 1 (10 of the 1,943 detected influenza viruses could not be sub-typed). A total of 97% of the influenza-positive patients had become infected with influenza A (H3N2) virus, 1% with A (H1N1)pdm09 virus and 2% with influenza B virus.

The National Influenza Centre for the WHO at the SSI detected changes in influenza A (H3N2) virus that were divided into four main groups. The changes in question were also detected in other countries.

The SSI performed PCR-based testing of 532 airway samples for more than 20 known airway viruses. A total of 330 samples tested positive, of which 163 (49%) were positive for influenza and 167 (51%) were positive for other airway viruses. Rhinovirus (13%), respiratory syncytial virus (13%) and corona virus (10%) were the second-most frequently occurring viruses, followed by parainfluenza virus (5%), human metapneumovirus (4%), adenovirus (3%), enterovirus (3%) and parechovirus (0.3%), Figure 6.

The National Influenza Centre for the WHO at the SSI carries the national responsibility for testing influenza samples from patients who initiate antiviral treatment for antiviral resistance. In all, 85 samples were received from 59 patients in the 2016/17 season, and the analyses are still ongoing. Additionally, in the 2016/17 season, a total of 226 randomly selected samples were tested for resistance to the neuroaminidase inhibitors oseltamivir (Tamiflu®) and zanamivir (Relenza), and no samples were resistant to both of these antiviral agents. The presently circulating influenza viruses are all naturally resistant to the ion channel inhibitors Amantadine and Rimantadine.

The median admission age was 71 years of age. In all, 88% had underlying risk factors for a serious influenza course. The most frequently reported risk factors were age > 65 years (1,838 patients, 63%), chronic pulmonary disease/asthma (712 patients, 24%) and cardiovascular disease (656 patients, 22%). For 347 patients (12%), information on risk factors was not provided. A total of 197 (7%) patients died within 30 days after the latest positive influenza test. 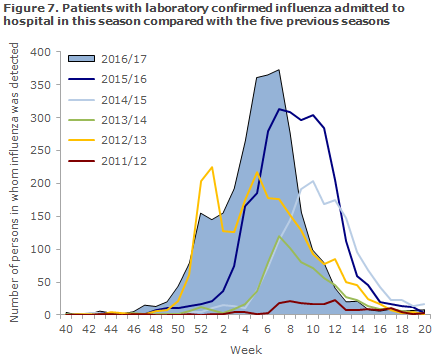 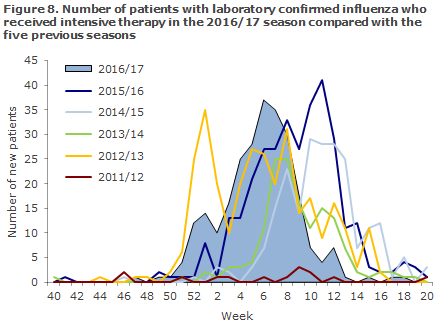 Of the 254 patients, 246 (97%) had influenza A detected and eight had influenza B detected (3%). Of these, 45% were women and 55% were men. The median age was 71 years. A total of 86% had underlying risk factors for a serious influenza course, the most frequently occurring risk factors among the admitted patients was age > 65 years (176 patients, 69%), chronic pulmonary disease/asthma (63 patients, 25%) and cardiovascular disease (44 patients, 17%). For 36 patients (14%), information on risk factors was not provided. A total of 59 (23%) patients died within 30 days after the latest positive influenza test.

Among persons ≥ 65 years, the mortality was increased from Week 50, 2016 to Week 13, 2017, whereas no increased mortality was seen among persons under 65 years of age. In the course of the entire season, from Week 40 to Week 20, an estimated excess mortality of 1,494 deaths was seen. Among these, 1,180 patients were 65 years or above, and a total of 837 of these deaths (95% confidence interval: 778-898) could be associated with influenza. This was lower than in the previous season, but in line with the level observed in the 2012/13 season when the circulating influenza virus was also A (H3N2). Calculation of excess mortality includes all deaths, regardless of cause.

Seasonal influenza vaccination was offered free of charge to specific risk groups from 1 October to 31 December 2016 and also to pregnant women in their second and third trimesters and to persons with immunodeficiency and their contacts until 1 March 2017, EPI-NEWS 39/16.

According to data from the Danish Vaccination Register, a total of 564,350 citizens accepted the offer, including 108,315 chronically ill patients, 17,038 early retirement pensioners, 8,058 pregnant women, 2,255 household contacts to immunosuppressed persons and 428,684 persons aged 65 years or above.

Slightly more vaccinations were given to immunosuppressed persons, pregnant women and household contacts than in the 2015/16 season. Despite a lower number of settled vaccinations among elderly people >65 years, the vaccination coverage in this age group increased from 44% in the previous season to 47% in the 2016/17 season. This was so because the statutory registration of vaccinations in the DVR means that vaccinations given to persons aged > 65 years, e.g. at work sites, now also appear from the register.

A total of nearly 128,000 vaccinations were registered as having been given to persons not belonging to the risk groups, compared with approx. 28,000 persons last year. The number of influenza vaccinations given to risk group persons and the vaccination coverage among elderly persons above the age of 65 years distributed by area and municipality are available at www.ssi.dk/data.

Influenza activity started early in the 2016/17 season. The majority of influenza A cases were due the subtype A (H3N2) known for its association with complications in the elderly population. The season registered the highest number of admissions with detected influenza across the entire season since the 2009/10 season, and an excess mortality was seen among elderly people. The excess mortality, nevertheless, was on a par with that observed in previous seasons when influenza A (H3N2) was in circulation. Also in Europe, several countries experienced significant excess mortality that occurred relatively early in the season. The number of patients admitted with influenza who received intensive therapy was lower than in the two previous years when influenza A (H1N1)pdm09 was in circulation. The median age for admitted persons was also 12 years higher than in the previous season.

The National Influenza Centre for the WHO at the SSI detected changes in influenza A (H3N2) virus that were divided into four main groups. The influenza effectiveness varied in these groups, and overall this season’s influenza vaccine provided only limited protection against influenza infection among the elderly. Nevertheless, influenza vaccination remains the best available prevention against complications to influenza, complications which may lead to admission and death, particularly in the risk groups. The vaccination coverage among elderly people was slightly higher in this season than in previous seasons (47%), which is probably owed to the fact that all vaccinations given to elderly people, including those given at work sites, are now recorded in the Danish Vaccination Register. Even so, the coverage remains far below the 75% recommended by the WHO.