The number of persons who had methicillin-resistant Staphylococcus aureus (MRSA) detected for the first time in 2016 increased considerably compared with the number observed in 2015.

A total of 3,550 cases were recorded in 2016 compared with 2,973 in 2015, Figure 1. This constituted an increase of nearly 20% and is the highest number of newly registered MRSA cases since mandatory notification was introduced on 1 November 2006, EPI-NEWS 44/06. The increase was due mainly to a rising number of imported and community-acquired cases. 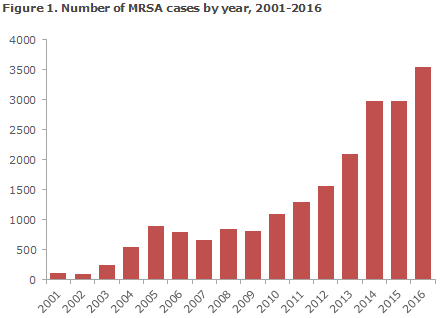 Based on presumed mode of infection, MRSA is categorised into the following: acquired abroad, hospital-acquired, community-acquired and livestock-associated. In Denmark, livestock MRSA is nearly always caused by the CC398 MRSA type, which is closely associated with live pigs.

Community-acquired MRSA is further divided according to whether the person has had contact to hospitals or the nursing sector (nursing homes, etc.) within the past 6 months, and if the person has come into contact with a known MRSA-positive person.

Table 1 shows the distribution of notified MRSA cases by presumed mode of transmission. 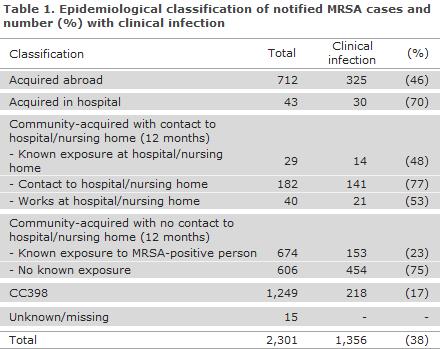 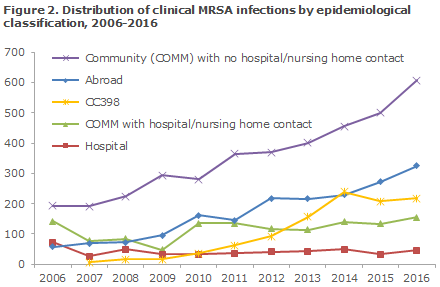 A total of 8 outbreaks counting 56 MRSA cases were identified. The largest outbreak was observed in the Region of Southern Denmark and comprised a total of 36 cases associated with a maternity ward, with a human variant of CC398 (spa type t034, scn and pvl positive). The second-largest outbreak, counting eight cases, started at a residential sports school for young people (spa type t148).

In a total of 673 cases, information on predisposing factors was reported with the primary factors being: ulcers (420), chronic skin conditions (103) and foreign objects such as drains and urinary or IV catheters (77).

MRSA of the CC398 type was detected using specific PCR analysis, which also determined if the strain was of the livestock MRSA type or a human variant. Isolates with a characteristic livestock MRSA CC398 profile (96%) were typically not spa typed or tested for resistance. 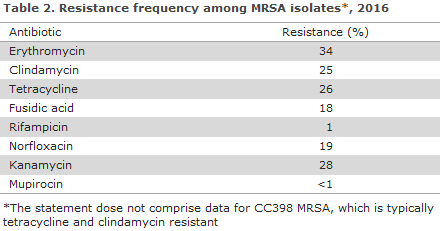 A total of 209 (17%) persons had no known contact to animals, which is above the level observed in 2015 (140 persons, corresponding to 11%). Among these, 98 had a clinical infection, corresponding to 47% of all detected infections, which is an increase from 2015 (77, 37%). 2016 saw a total of seven cases of livestock MRSA CC398 bacteraemia, including one with a fatal outcome within 30 days. Contact with pigs could not be confirmed for this patient.

MRSA usually carries the mecA resistance gene, but some carry a variant of the mecA gene called mecC. In 2016, 45 cases (1.3%) were shown to have the mecC-MRSA gene, which is slightly lower than the previous two years: in 2014 (53) and 2015 (61). The type was initially described in 2010, EPI-NEWS 47/12, and has been associated with a wide range of different animal species, particularly cattle and sheep but also wild animals. The source and mode of infection were unknown in the majority of the cases.

The number of imported MRSA cases rose sharply in 2016, which was due partly to an increase in the number of new MRSA cases among asylum seekers. Asylum seekers were reported separately in 2015 and 2016 as these cases are often from areas with a high MRSA incidence, and in Denmark this group is offered treatment only if the logistic conditions permit.

In 2016, a total of 417 cases of MRSA were detected among asylum seekers. This constitutes an increase compared with 2015 (150). Part of the increase may be attributed to a changed and more thorough recording practice, and the screening activity has probably also increased.

Many of the cases among asylum seekers carried MRSA of the types t304 and t223, which are now the most frequently observed spa types. It is therefore recommended that asylum seekers who live or have lived in asylum centres within the past 6 months are tested for MRSA carrier state when they come into contact with a hospital.

The number of new MRSA cases once again increased in 2016 following a stable period in 2015. The increase was due to continued increase in the number of imported and community-acquired cases. Among the imported cases, asylum seekers comprised an increasing share of the cases in 2016. As previously, 2016 recorded a very low incidence of hospital-acquired MRSA, indicating that the national Danish MRSA guidelines are working well.

A slight increase was seen in the number of livestock MRSA CC398 cases, but the share of the total number of MRSA cases nevertheless followed a slightly decreasing trend from 2015 and is at par with the number observed in 2014. This is probably because testing has been performed on a larger share than previously of persons who come into direct contact with pigs. This causes the number of persons at risk of a new infection to decrease. It should be noted that despite the levelling off, it is very likely that the number of healthy carriers will accumulate over time, particularly among carriers of livestock MRSA CC398 with contact to livestock.

This is so because these carriers are not comprised by MRSA treatment programmes. The number of people with livestock MRSA CC398 without known contact with pigs has increased, and more infections are also seen in this group. This trend is expected to increase due to the increasing infection pressure from livestock MRSA CC398. In consequence of the development in livestock MRSA CC398, the 2016 revision of the MRSA guideline introduced that all hospital patients who have come into contact with pigs shall remain isolated until they test negative, and that contact to mink is now also a special risk group.

Statens Serum Institut (SSI) currently receives an increasing number of calls from parents who state that their GP has referred them to the SSI for advice about measles prior to travels in Europe and elsewhere.

The SSI still does not provide either written or phone-based advice for private citizens. The GPs are encouraged to stay updated on the current vaccination recommendations, including for travels, at the SSI’s website under News, and in EPI-NEWS.

In 2017, an increased number of cases were detected in various European countries, and non-immune travellers may be at risk when travelling to common tourist destinations. The only effective preventive measure against measles is vaccination with the MMR vaccine, which also protects against mumps and rubella.

In relation to the childhood vaccination programme, it is important to point out that there is no general recommendation to give the first MMR vaccine earlier than at the recommended 15 months of age. If the parents are worried about infection and want to bring forward the time of the first vaccination, the MMR vaccine may be given right away as from 12 months of age. If practical, it may be given at the same time as the other vaccines usually given at this age (DTaP-IPV/HIB and PCV13), and otherwise with any interval relative to these.

If you need to stay in an area that is known to harbour measles outbreaks, the MMR vaccine may be given as from 9 months of age. In special cases, it may be considered to give the vaccine off-label from 6 months of age, see below. In both of these cases, the vaccination must then be repeated at the times recommended in the childhood vaccination programme (at 15 months and 4 years).

The cost of any extra MMR vaccination is defrayed by the parents.
If a neonate has become exposed to infection, the MMR vaccine may be given (off-label) as from 6 months of age, EPI-NEWS 50/15.

This will also lead to a recommendation that the child receives an extra MMR vaccination. As the first MMR vaccine in this situation is given as part of post-exposure prophylaxis (PEP), this vaccination will be covered by the National Danish Health Service (Sygesikringen).

In 2017, Europe has seen a particularly large amount of measles cases in Germany (634 cases, particularly in Nordrein-Westfalen), Italy (2,719 cases in 18 of the 21 regions, but mainly in the regions of Abruzzo, Lazio, Lombardy, Piemonte, Sicily, Toscana and Veneto), Belgium (293 cases in all provinces of Wallonia) and Romania (6,434 cases since the beginning of 2016, particularly in Western Romania). Measles are also still in circulation in many other countries beyond Europe, including Africa and Asia. The American continent was declared free of Measles in September of 2016.

It is the objective to eradicate measles (and rubella) in the WHO Europe Region no later than by 2020. Denmark is expected to achieve status as having eliminated measles during the course of 2017.