Ornithosis 2016
Blood donor screening 2016
The Danish Health Authority’s information leaflet on the childhood vaccination programme has been translated into another four languages.

In 2016, a total of 24 persons were notified with ornithosis (parrot fever), which is caused by the zoonotic bacterium, Chlamydophila psittaci, Table 1. The group of notified cases counted 18 men and 6 women. The median age was 63 years (range 13-86 years). A total of 23 persons were recorded as having become infected in Denmark and one probably in Chile. No persons died in timely association with ornithosis.

Of the 24 people, 19 had been admitted to hospital and the diagnosis was confirmed in 19 of these cases by PCR performed at the departments of clinical microbiology in Aalborg, Slagelse, Odense, Herning and Vejle and at the SSI, respectively. In 17 of the cases, the sampling material was lower respiratory tract secretions, and in two cases it was a swab from the upper airways. In the five non-admitted persons, the diagnosis was confirmed by PCR in four cases (two swabs and two secretions from theupper respiratory tract), whereas one person was diagnosed retrospectively by serology. The patient had come into contact with sick birds at the market/country fair described below, which was therefore considered to be the source of infection.

For the notified cases, it was stated that seven had been diagnosed with pneumonia, including one with sepsis and another with kidney failure. Fever, possibly with cough, was described for another eight patients, and sepsis was described in one of these patients. In nine cases, there was no information about symptoms.

Both in 2015 and 2016, the number of notified cases of ornithosis was somewhat higher than the numbers recorded in the preceding years, Table 1. An outbreak at a market/country fair contributed to the increased number of cases recorded in 2016. More data are available in Danish at ssi.dk/data, select “Ornitosis” under “Individuelle anmeldelser” (Danish for Individual notifications).

In 2016, a total of 279,357 units of blood were screened. Only two donors tested positive for HIV and hepatitis C, respectively. The number of positive donors is presented in Table 2.

One bisexual man, who was previously a donor, tested HIV positive. The last time he had donated blood was more than five years ago and he tested positive after that donation.

A female first-time donor tested positive for hepatitis C. She was born abroad and had furthermore been tattooed, pierced and had decorative body cavities.

The number of donors who tested positive in Denmark in 2016 was the lowest recorded under the blood donor screening scheme, Figure 1. The Department of Infectious Epidemiology and Prevention holds information on screening of blood for HIV as from 1986, and for hepatitis B and C as from 1994. 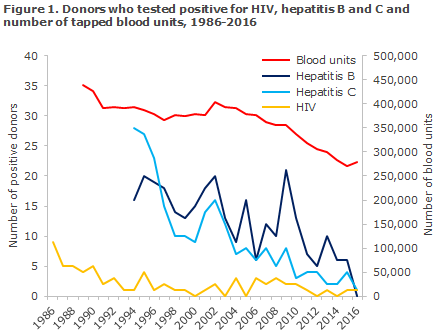 NAT screening (nucleic acid amplification technique) of donor blood for HIV, hepatitis B and C virus was introduced by law on 1 January 2009, EPI-NEWS 2/10. Following the introduction of NAT screening, the total number of NAT-positive donors detected in the 2009-2016 period and who would not have been detected as part of the serological tests was ten, nine for hepatitis B and one for Hepatitis C. In the Danish State Budget for 2017, it was decided to discontinue this NAT screening. Instead, conventional serological tests for HIV and hepatitis B and C will be used as was previously the case. Furthermore, supplementary testing for hepatitis B is introduced with anti-HBc screening at all blood donations.

The Danish Health Authority’s information leaflet on the childhood vaccination programme has been translated into another four languages.