Due to the epidemic spreading of Zika virus, particularly in South and Central America, the WHO has declared Zika virus a Public Health Emergency of International Concern (PHEIC). It is mainly Zika virus in pregnant women that is of clinical importance as Zika virus has been acknowledged as the course of microencephaly and other serious neurological injuries in neonates.

This issue of EPI-NEWS describes the initial experiences diagnosing Zika virus in Denmark.

In Denmark, the main indication for Zika virus testing is control and follow-up on pregnant Danish women who have returned from an area with active Zika virus transmission. According to the Danish Health Authority’s guideline, all pregnant women who have visited an area with active Zika virus transmission should be referred to an obstetric department for further testing, regardless of whether the women have presented with symptoms or not. At the obstetric department, Zika virus diagnostics will form part of the work-up.

On clinical assessment, it may also be relevant to test for Zika virus infection in others who have experienced relevant symptoms following a stay in areas with active Zika virus transmission.

In January 2016, Statens Serum Institut (SSI) extended Zika virus diagnostics to include serology in the form of immuno-fluorescence testing for IgG and IGM antibodies in addition to the current methods for PCR detection of virus RNA. In connection herewith, the SSI wanted to conduct an interview study to determine the underlying indications for diagnostics with a view to assessing the typical causes why the physicians ordered a Zika virus analysis, and to establish to which degree the guidelines from the Danish Health Authority were being followed. The objective was to interview approx. 100 of the first patients who had been tested in Denmark.

The Department of Infectious Disease Epidemiology has interviewed 115 unselected, consecutive persons who had been tested for Zika virus in the period from 5 January to 18 April 2016. The majority (78 persons, 67.8%) were women, and the median age was 32 years (range 11-75 years). The women were slightly younger than the men (median 31 years for women and 35 years for men).
Two cases (1.7%) had tested positive to Zika virus; a man who had presumably become infected in either Colombia or Mexico in January 2016 (case 1) and a woman who had become infected in Brazil in January 2016 (case 2). Both had presented with clinical symptoms that were consistent with Zika virus infection. The woman was not pregnant.

A total of 78 (67.8%) of the 115 interviewed persons were tested in relation to a pregnancy issue. This included 52 pregnant women (45.2%), eight (7.0%) men who had a pregnant partner, and 18 (15.7%) were men or women who were planning a pregnancy within the next 2 months. For 30 of the pregnant women, the median at arrival to the travel destination was gestational week 13 and the median when departing from the travel destination was Week 14, see the distribution in Figure 1.

A total of 106 (92.2%) of the interviewees had travelled in countries in South or Central America with active Zika virus transmission. Seven had stayed in South-East Asia or in the USA, and two had no travel activity. The median duration of stay was 19 days (range from 7 days to 3.5 years).

For 84 (79.3%) of the persons who had returned from countries with active transmission in South or Central America, the destination was already known to have Zika virus outbreaks during their stay, whereas the destination of 22 (20.8%) returning persons was declared an area with Zika virus outbreaks only after they had returned.
More than one in every ten of the 113 travellers (14, 12.4%) stated that they had not been bitten by mosquitoes during their travel. Nearly every third (37, 32.7%) had not used mosquito bite prophylaxis. A total of 89 persons (78.8%) had received relevant travel vaccines before their departure, whereas 9 (8.0%) stated that they had not received any travel vaccines, and 15 (13.2%) did not know if they had received travel vaccination. 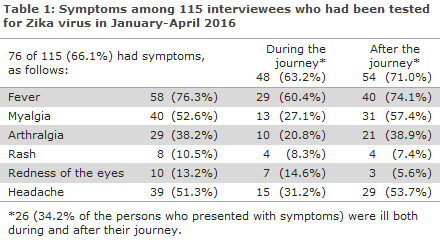 The objective of this interview study was to elucidate the indications used in practice for diagnosis of Zika virus and to establish any symptoms the patients had presented with, among others to describe how Danish healthcare reacts when facing a new infectious disease with potentially serious sequelae.

In the period from extended Zika virus diagnostics was introduced in January 2016 and to 31 July 2016, a total of 512 patients were tested and a total of three tested positive (one man and two non-pregnant women). Two of the positive persons were included in the described interview study. The positive persons were found in the beginning of the testing period and had returned from South or Central America. Since the questionnaire study was conducted, a partial shift in the sex distribution has been observed as a relatively larger share of those who undergo laboratory testing are now men.

This may be because many Danish pregnant women or women who want to become pregnant no longer travel to areas in South or Central America with a known risk of Zika virus infection. Furthermore, it is likely that the growing evidence for a risk of sexual transmission means that returning men are tested for Zika virus more often than was previously the case, regardless of whether they have symptoms or not. According to reports, Zika virus persisted in semen for up to 6 months, but it remains unknown for how long time Zika virus in semen remains infectious.

Among those tested for Zika virus, the indication was related to pregnancy in the vast majority of persons, either in the form of known pregnancy or planned pregnancy in the next 2 months. This suggests that the test is relevant for the vast majority of persons who are tested in Denmark, and that Danish healthcare largely follows current guidelines. Nevertheless, no information is available about the reasons why the non-pregnancy related tests were performed.

The potential effect on the outcome of pregnancy lies at the heart of the concern raised by the Zika virus epidemic. It is therefore understandable that the diagnostic practice is less restrictive with respect to pregnancy-related diagnostics than other diagnostics, which is underpinned by the higher number of asymptomatic persons and persons with a non-relevant geographical travel history among the pregnant women than among the non-pregnant persons.

As a secondary finding, the interview study established that more than one in every ten did not know if they had received travel vaccination with standard vaccines such as the hepatitis vaccine, etc. This is a surprisingly high share as all of the persons included have travelled outside of Europe to destinations where travel vaccination is recommended. It requires further investigation to establish if the result reflects that the persons in question had not received travel vaccination, but the result may suggest lacking information among the travellers involved about the health risks that may be associated with travelling.

Current recommendations for diagnostics of Zika virus and for pregnant travellers

For serology, a so-called IgM and IgG titre coined mosaic whole virus immunofluorescence assay (IFA) is used along with dengue 1-4- and chikungunya-IgM/IgG for differential diagnostics in collaboration with the Robert Koch Institute, Germany. This method, which uses Zika virus IgM, has proven to be both sufficiently sensitive and specific for the diagnostics of Danish travellers, and IgM may remain positive for weeks to months after infection.

An IgG seroconversion and/or a minimum 4-fold titre increase in IgG confirms IgM, whereas a weaker IgG without titre increase and with a negative IgM was seen in a limited number of persons, particularly South Americans, which may be due to previous infections with flavivirus and/or vaccinations.

Overall, from 5 January to 5 October 2016, a total of 1,046 specimens from 745 patients were tested with PCR and/or serology. A total of eight positive persons were detected; three men and five women one of whom was pregnant. PCR detected Zika virus in the semen of one man 4-8 weeks after he had returned from Mexico.

Even though it is well-established that Zika virus infection during pregnancy may cause foetal malformations, the scope of this risk is currently uncertain. To this date, foetal malformations associated with Zika virus have largely been restricted to some of the countries in the Pacific Region and in South and Central America where endemic outbreaks of the virus have occurred since 2014-2015.

In Africa and Asia, cases of Zika virus have been recorded for the past approx. 60 years, but no clustering of foetal malformations has been observed in connection with this virus. It is therefore assessed that Zika virus in Africa and Asia does not occur epidemically, but endemically, i.e., at a regular, but only low and unchanged incidence in the general population. Thereby the risk of Zika virus infection for travellers in these areas is correspondingly low, but not non-existent.

The lacking knowledge about the risk of Zika virus infection during pregnancy in connection with foreign travel is reflected in the advice provided by individual countries and international organisations. Some provide advice on the basis of a precautionary principle, whereas others give advice based on current evidence. Therefore, the advice provided by each country and organisation may, in part, be discordant.

The SSI regularly updates its Zika virus web and recommends that health workers and any pregnant women who are considering to travel keep up to date by visiting: the Zika virus theme (Tema om zikavirus), Questions and answers (Spørgsmål og Svar) and Protection of pregnant travellers  (Beskyttelse af gravide rejsende).

For the second autumn season running, signs are being observed of a mycoplasma pneumoniae (MP) epidemic. In the past weeks, a considerable increase was seen in the number of samples that test positive for MP by PCR in the MiBa  (The Danish Microbiology Database). From Week 35 to Week 40, an increase was seen from 72 cases to 187 cases per week, and the positive rate rose from 6 to 13. Currently, more than twice as many cases are detected compared with the same time last year. This year, the epidemic has started slightly earlier than in the 2015/16 season. The 2015/16 epidemic did not peak until the beginning of January 2016, after which it receded. As last year, this year has seen most detected cases among younger school-aged children (6-12 years of age) and younger adults (the group of parents), but the positive rate for children is substantially higher (more than 50%) than that of the adults (slightly more than 10%). The current increase has been seen across Denmark, but it is more pronounced in the Capital Region of Denmark and in the North Denmark Region where the average positive rate from Week 37 to Week 40 has been 24%. In the 2010-2012 period, a similar situation was seen with a two-peaked MP epidemic that spanned two seasons, Figure 2 For further information on clinical tests and treatment, please see the Disease Dictionary (Danish: Sygdomsleksikon). 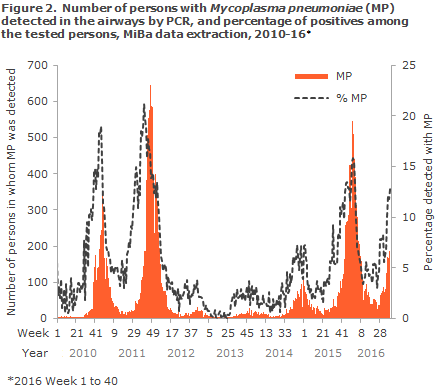