The 7-valent pneumococcal conjugate vaccine (PCV-7) was introduced into the Danish childhood vaccination programme on 1 October 2007, and as from April 2010 it was subsequently gradually replaced by the 13-valent conjugate pneumococcal vaccine (PCV-13) which has superior coverage. A total of three vaccinations are recommended at 3, 5 and 12 months of age.

Coverage was calculated using data from the Danish Vaccination Register and included vaccinations administered up to and including 10 September 2016.

The coverage of the PCV vaccines in the childhood vaccination programme for birth cohorts 2007-2015 was in the range 85-94% for the first PCV, 82-93% for the second PCV and for 2007-2014 the coverage was 69-90% for the third PCV, Table 1. For the 2015 birth cohort, vaccination with the third PCV had not been concluded at the calculation date. Modest geographical variation was observed, including a slightly lower coverage in the areas of West and South Zealand and in the City of Copenhagen, i.e. in the municipalities of Copenhagen, Frederiksberg, Tårnby and Dragør, compared with the remaining parts of the country, www.ssi.dk/data.

Figure 1 shows the age-specific incidence of laboratory-confirmed IPD cases per 100,000 inhabitants before and after the introduction of PCV-7 and PCV-13 into the childhood vaccination programme.

The report is based on national Danish data from the Neisseria and Streptococcal Reference Laboratory, Statens Serum Institut (SSI). An IPD case is defined as a disease episode for which pneumococci (Streptococcus pneumoniae) have been cultured in cerebrospinal fluid, blood or another normally sterile sampling material, such as a joint. As from 1 October 2007, submission to the SSI of pneumococcal isolates for serotyping has been required by law to support the national monitoring of IPD.

The total IPD incidence in the population in the period from 2000 to 2007, i.e. before the introduction of PCV vaccination, was approx. 20 cases per 100,000 or an average of approx. 1,060 annual cases. The incidence has now been reduced significantly by approx. 25%, equivalent to 15 cases/100,000 or 840 annual cases in the PCV-13 period. The decrease in IPD incidence is observed both among vaccinated and unvaccinated age groups.

The IPD incidence of the 6 additional serotypes that are included in the PCV 13 vaccine has decreased from 13 to 1.5 cases per 100,000 in these children who constitute the primary target of the vaccination programme. Nevertheless, the incidence of the serotypes that do not form part of the vaccine has increased from 5.5 to 15 cases per 100,000, but this does not overshadow the overall advantages gained owing to the vaccine, Figure 1.

Among persons above 65 years of age, a significant decrease in IPD incidence has been seen; from approx. 66 cases per 100,000 before the vaccine was introduced to approx. 48 cases per 100,000 in the PCV-13-period. This decrease is mainly owed to a decrease in the occurrence of the serotypes included in PCV-7 and PCV-13.

The observed decrease in incidence among unvaccinated elderly persons is presumably owed to the fact that PCV reduces the carrier state in vaccinated children for the serotypes comprised by PCV and thereby reduces the circulation of vaccine serotypes in the population; the so-called herd effect. In 2014 and 2015, a slight increase in the incidence was seen. Like in children <2 years, this is due to an increased incidence of serotypes not included in the vaccine.

The PCV-13-period has also seen a decrease in the number of deaths following IPD among persons aged more than 65 years of age compared with the period prior to the introduction of the vaccine and compared with the PCV-7-period. By linking IPD cases with data from the Danish Civil Registration Register (the CPR Register), the IPD-related mortality can be established by counting all deaths occurring in the 30 days following IPS detection.

IPD is a serious infection that is associated with a high mortality. Following the introduction of the PCV-13 into the childhood vaccination programme, the risk of death due to IPD has decreased by approx. 20%, and overall a reduction of30 annual deaths following IPD have been recorded. 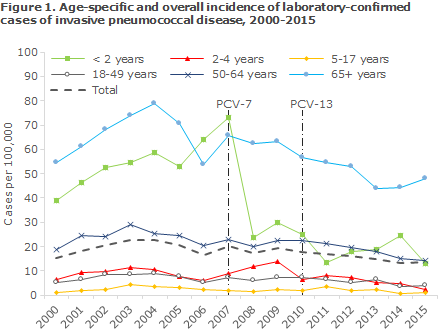 Eight years after the introduction of the first pneumococcal conjugate vaccine, the serotypes PCV-7 and PCV-13 occur rarely as a cause of IPD in children < 2 years of age in Denmark. However, data up to and including 2015 show a significant increase in non-vaccine serotypes among children < 2 years of age and elderly people above 65 years, and also a minor increase in the IPD incidence in elderly people above 65 years of age.

The increase does not counteract the overall positive effect of the vaccine. The PCV-13-period has also recorded a decrease in the mortality following IPD for elderly persons aged more than 65 years, which is presumably owed to the previously described herd effect.

New sub-site on travel vaccination at the SSI website

The SSI has developed a new sub-site with vaccination recommendations and malaria prophylaxis, if relevant, for travellers.

The sub-site replaces the current solution called Travels and Infectious Diseases (Rejser og smitsomme sygdomme, in Danish) and is called “Travel Vaccination” (Rejsevaccination, in Danish). The sub-site targets both health workers who provide travel advice and vaccination, and travellers.

Recommendations are based on travel duration and type

The recommendations are still based on the travel’s duration and the planned type of travel, which have now been grouped together. The access point for searching is a specific country, and once duration and type of travel have been selected, the relevant vaccines and malaria prophylaxis, if relevant, are shown.

For each vaccine, the site will provide information about the latest vaccination start relative to the date of departure, how many doses are required and from which age the vaccine may be given, and how long the protection gained by vaccination lasts.

As a new feature, it is stated for each country if travellers may be required to provide documentation for yellow fever vaccination – both when entering the country from Denmark and from yellow-fever-endemic areas. Furthermore, any special risks either in the form of risk behaviours or risk areas that may be associated with a recommendation for additional vaccinations are stated together at the end of the list of proposed vaccines.