Rickettsial infections are vector borne infections caused by Rickettsia species bacteria. Rickettsia is an obligate intracellular bacterium that may be divided into two subgroups: The spotted fever group (SFG) and the typhus group (TG), each of which comprises various species. The bacterium is found in all parts of the world and may be transmitted through tick bites and/or insect bites (particularly by lice and fleas).

The primary reservoir for SFG is small rodents and deer, and the bacterium is transmitted to humans through ticks and fleas. There are more than 16 different SFG rickettsiae, several of which occur in Europe and the USA. R. africae is, among others, found in Sub-Saharan Africa and on the French Antilles. Travellers doing walking safari (in grass and bushes) and being on hunting vacations are particularly exposed to African tick-bite fever.

In Denmark, various Rickettsia species have been detected in ticks removed from both deer and dogs. It is therefore possible that SFG rickettsial infection may occur in Denmark, e.g. in connection with tick bites, particularly by Ixodes ricinus.

The TG rickettsiae include R. prowazekii (epidemic typhus/sylvatic typhus) and R. typhi (murine typhus). Infections with TG rickettsiae have only rarely been diagnosed. The primary reservoir for R. prowazekii is humans, and body lice is the primary vector. For R. typhi, the main reservoir is rats, and the most important vector is the rat flea. Therefore, infections by rickettsiae from the TG group are associated with poverty and poor hygiene. Epidemic typhus is found in all parts of the world, but is more prevalent in tropical and subtropical areas that have a coast line and in large cities with poor vector and reservoir control. In Europe, the condition is primarily seen in immigrants and socially exposed individuals such as homeless people.

The symptoms of rickettsial infection are characterised by a combination of fever, rash, headache and/or eschar, i.e. a characteristic, clearly delimited sore with a dark/black crust. This sore is located where the tick/ticks has/have bitten, frequently on the lower extremities. The condition varies from very mild and self-limiting cases to severe disease courses with potentially fatal complications. The incubation period is usually 2-14 days. Eschar may occur in several SFG, but is rarely seen in TG. There may thus be both several clinical similarities and differences between SFG and TG. Other symptoms include coughing, confusion, rigours, myalgia, swollen lymph nodes, vomiting, abdominal pain, diarrhoea, jaundice and nausea.

At Statens Serum Institut, PCR is used for direct detection of Rickettsia and serology is used for detection of specific antibodies. The sample for PCR should be taken early in the disease course and before any relevant antibiotics treatment as the sensibility of the method of analysis may otherwise be reduced.

If the patient has eschar, the diagnosis can frequently be made on the basis of the patient’s history and clinical tests, and may then subsequently be confirmed through laboratory diagnostics. PCR testing of scrapings or biopsy of eschar may confirm up to 75% of the cases. In patients with no eschar, PCR may be used to detect Rickettsia - in the acute phase of the condition in tissue biopsies/lymph nodes.

Consequently, a negative PCR result does not exclude rickettsial infection. On continued suspicion, this analysis should therefore be supplemented by testing for Rickettsia antibodies in a minimum of two consecutive serum samples. The employed PCR method can detect all Rickettsia species, and subsequent sequencing ensures identification of the species in question.

In most rickettsial infections, an increase in the antibody levels can be detected after 2 weeks of disease; and in more than 90%, a titre increase is seen after another 2-3 weeks. Therefore, a sample should always be followed by a new serological analysis 2-3 weeks after the initial analysis. A positive antibody response with no clinical manifestation is most frequently not a sign of current rickettsial infection. IgG antibodies against Rickettsia may be detected up to one year after the infection.

In 2008, the previously used Weil-Felix test (agglutination test) was replaced by detection of specific antibodies by immunofluorescence assay (IFA) in which slides coated with whole-cell bacteria are incubated with patient serum. The test exploits the fact that cross-reaction occurs between the various species of Rickettsia within SFG and TG, respectively. At the SSI, the cut-off level for IFA has been changed from the recommended cut-off suggested by the producer as it has been adjusted to account for the background level in the Danish population following testing of Danish blood donors.

This is in accordance with the American Centers for Disease Control and Prevention (CDC) that have established that 5-10% of the US population tests positive when using the low IgG cut-off (≥64). Raising the limit for a positive diagnosis will decrease the likelihood of false-positive diagnostics. According to the CDC, the antibody response to R. Africae, which forms part of the SFG group, may occur with up to four weeks of delay from disease onset. 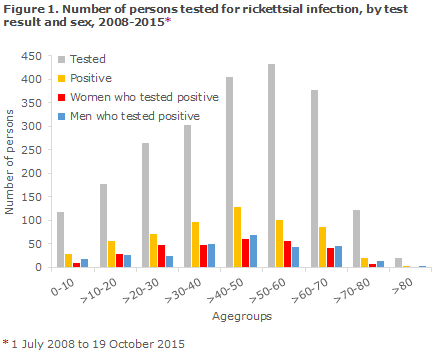 In connection with submission of samples, information about travel or tick bites was available only for a limited number of persons. A total of 200 samples contained information about foreign travel and 80 about insect bites. Approx. 10% (61) of the 591 persons with a positive test result had possibly become infected after travelling abroad, and approx. 5% (28) informed of tick or insect bites. 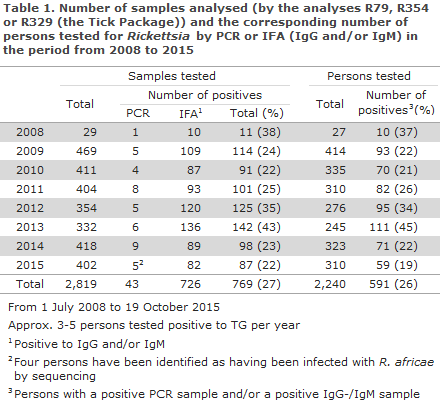 Rather than awaiting the result of microbiological diagnostics on clinical suspicion of rickettsial infection, empirical treatment with doxycycline should be initiated. The clinical response takes effect rapidly, and the recommended dose of 100 mg x 2 daily will usually lower the patient’s temperature within 48-72 hours.

The treatment should be continued for 48-72 hours after the symptoms have fully receded. Treatment of children remains a contested issue, but brief doxycycline treatment seems to be unproblematic. Doxycycline treatment in children below 8 years of age should be avoided. Aminoglycosides (gentamicines and similar) or broad-spectrum beta-lactam antibiotics (used to treat neuroborreliosis) have no effect on rickettsiae.

Rickettsial infection may be prevented by avoiding contact to possible host or reservoir animals and by using protective clothing when staying in natural areas - including boots and long-sleeved trousers, preferably impregnated with permethrin. The clothes should be used in a manner that does not allow the ticks to crawl under the clothing.

Bright coloured clothes facilitate the detection and removal of any ticks. Furthermore, the body should be checked for ticks and other insect/spider bites and rashes. Prevention is also important in connection with travels to areas with many ticks, e.g. safari travels to savannahs, and in wood and hunting areas where the ticks may be found in the high grass.

No vaccine is available to counter rickettsial infection.

In September 2015, Denmark entered a Scandinavian collaboration on tick-borne infections, including rickettsial infections. The project comprises both method development and mapping of the population’s behaviours in risk areas and the population’s understanding of the diseases (Scandtick Innovation). In this context, public information material will be developed for various age groups.

From 2008 to 2015, a total of 591 persons tested positive to rickettsial infection in Denmark. Information was lacking about the cause of the sampling, the clinical symptoms and about travel anamnesis. Therefore, it remains uncertain how many of these persons have had a clinically significant infection.

In consequence, further studies are being planned to gain knowledge about symptoms and travel anamnesis, among others to improve our ability to differentiate between infections acquired abroad and in Denmark. As described above, FG rickettsial infection, such as R. helvetica, has been detected in Danish ticks, but it has still not been studied in detail to which extent they cause clinical illness in Denmark.

It is possible that rickettsial infection may also be acquired in Denmark, but we do not know how often this is the case or if serious infection ensues. Based on international literature, the symptoms may vary from mild to severe, depending on the Rickettsia type and depending on whether the infection affects a healthy person or an immunodeficient person. The condition can be effectively treated with antibiotics. In order for us to collect knowledge n why the test is ordered, about clinical information and travel anamnesis, as well as information to clarify if the patient has known exposure to, e.g., tick and/or insect bites.

Furthermore, it is always recommended that a positive antibody response is followed up by a subsequent sample 2-3 weeks later.