The number of persons who had methicillin-resistant Staphylococcus Aureus (MRSA) detected for the first time in 2015 was nearly identical to the number observed in 2014. A total of 2,971 cases were recorded compared with 2,973 in 2014, Figure 1. This is the first time since 2009 when the SSI recorded 818 new MRSA cases that the number has not increased. 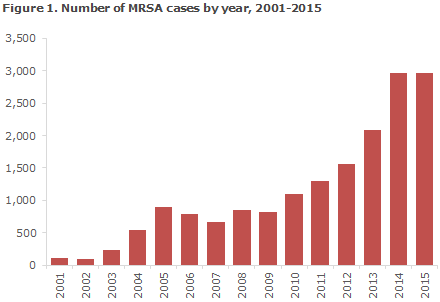 In 1,147 cases (39%), clinical infection was the reason why sampling was performed. In 29 cases, MRSA was isolated from blood, corresponding to 1.5% of all S. aureus bacteraemias, which is a substantial decrease with respect to the previous year (56, 2.9%) and in line with the years before that. 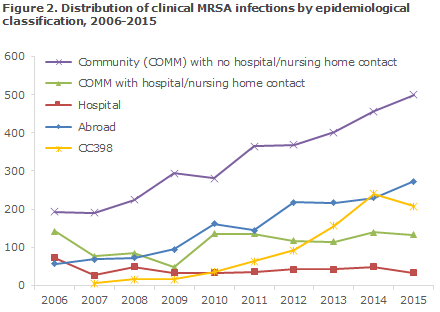 MRSA of the CC398 type was detected using specific PCR analysis, which also determined if the strain was of the human-adapted type (scn positive). Isolates with a characteristic livestock MRSA profile were typically not spa-typed or tested for resistance. For isolates with a classic livestock MRSA profile, every tenth isolate was whole-genome sequenced. Resistance determination of 68 isolates confirmed previous findings that CC398 is resistant to tetracycline and frequently (> 90%) to clindamycin.

fatal outcome within 30 days. Contact with pigs could not be confirmed for this patient.

MRSA usually carry the mecA resistance gene. In 2015, a total of 61 (2.1%) cases of the mecC MRSA gene, a variant of mecA, were detected compared with 53 cases (1.8%) in 2014. The type was initially described in 2010, EPI-NEWS 47/12, and has been associated with a wide range of different animal species, particularly cattle and sheep, but also wild animals. The source and mode of infection were unknown in the majority of the cases.

In 2015, a total of 150 cases of MRSA were detected among asylum seekers. As asylum seekers are often moved between various centres, they are only offered treatment if the logistic conditions allow for this (and if the physical premises at the centre in question facilitate the treatments). It is therefore recommended that asylum seekers who live or have lived in asylum centres within the past 6 months are tested for MRSA carrier state when they come into contact with a hospital.

The number of new MRSA cases now seems to level off after several years with substantial increases. It is encouraging that 2015 recorded a slow-down, even though this trend conceals a continued increase in the number of imported and community-acquired cases. A minor decrease in CC398 was observed, which, however, cannot be considered a reflection of a decrease in the number of persons infected. It is more likely that the decrease is due to a greater share of persons who come into contact with pigs being tested.

This causes a decrease in the number of persons who are at risk of first-time infection. It should be noted that despite the levelling off, it is very likely that the number of healthy carriers will accumulate over time, particularly among carriers of CC398 MRSA with contact to livestock. This is so, because healthy carriers with contact to livestock are not comprised by MRSA treatment programmes. It is, nevertheless, remarkable and positive that the number of persons with CC398 with no contact to pigs has not increased. This population is “infinite”, and continued spreading to the community in general would have been recorded if the CC398 infection pressure was increasing. This conclusion is not changed by adjustment for the extraordinary screening test performed in 2015.

In 2014, 2.9% of all S. aureus bacteria were caused by MRSA, whereas in 2015 the corresponding share was 1.5%, which is in line with the years before 2014. The high number of MRSA in blood observed in 2014 therefore seems not to reflect a real increasing trend.