In 2015, the Department of Infectious Disease Epidemiology received 13 notifications of cases of acute hepatitis C; 11 of the cases were men and two were women. The median age was 39 years (range 26-55 years). One of the women and four of the men had been infected in Denmark through IV drug use. Six men had been infected through homosexual contact, including five in Denmark and one in the United States. All six were known HIV positives. In one male case, the mode of transmission was not stated. One woman had been infected via haemodialysis in Afghanistan.

Table 2 presents the distribution by region and area and the notification incidence per 105 citizens. 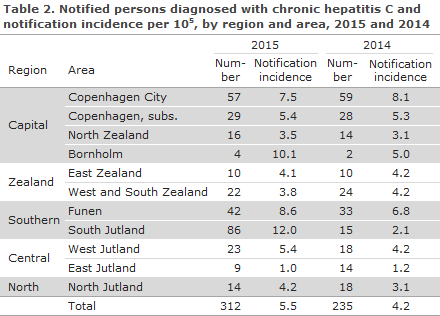 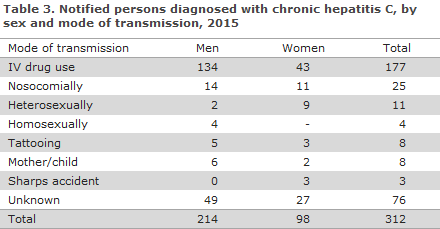 IV drug use was stated as the source of infection in 177 (57%) of the notified cases. Among these, 159 (90%) were acquired in Denmark. A total of 25 persons (8%) were notified as nosocomially infected; an increase from 16 such notified cases in 2014. The group of 25 included seven Danes of whom five were infected in Denmark via blood products before the introduction of HCV donor blood screening in 1991. All of the 18 nosocomially infected immigrants were infected before their arrival to Denmark.

In 11 cases, heterosexually transmitted infection was notified, including nine cases infected in Denmark, one in Armenia and one in Tunisia. Among the heterosexually infected cases, seven had engaged in sex with a person who was known to have HCV. None of the 11 cases were HIV positive.

Four were homosexually infected, three of whom were known HIV positives, whereas the last person was HIV negative. Two persons were notified as having been infected in Denmark, one in Spain and in one case the country of infection was unknown.

Hepatitis C rarely presents as an acute illness; it is generally diagnosed only once the chronic stage has been reached. When hepatitis C is detected in connection with screening of asymptomatic IV drug users and HIV positives, the classification of the case as either acute or chronic hepatitis C depends on whether negative tests have been performed within a short interval preceding the test by which it was detected. Therefore, the distinction between acute and chronic hepatitis C is sometimes arbitrary.

The number of notified cases is at par with that observed in recent years. Nevertheless, more notifications were received from South Denmark in 2015 than in 2014, when only 15 cases were notified. A total of 44 (51%) of the 86 notified cases from South Jutland had been tested prior to 2015, but were not notified until 2015.

It is still mainly IV drug users who are notified with hepatitis C in Denmark. It is possible that some homosexuals are mixed in with the rather large group with an unknown mode of infection, and it is also possible that not all of those who are tested in connection with the HIV controls are notified; and the incidence of HCV among HIV positive men who have sex with men (MSM) may therefore be underestimated.

There has been a slight increase in the number of notified persons who are assessed as having been infected nosocomially. All of the cases who were infected in Denmark are notified as having been infected before the introduction of hepatitis C screening of donor blood. The increased number of immigrants notified as nosocomially infected is seen as a random finding as no country-of-origin-specific pattern could be established

The American Centers for Disease Control and Prevention (CDC) recommend that the so-called baby-boomers, i.e. persons born in the 1945-1965-interval be tested for hepatitis C. The background for this recommendation is that there may be asymptomatic cases where hepatitis C was acquired in connection with the reception of blood products prior to the introduction of screening for hepatitis C in the 1990s or in connection with previous, temporary IV drug use.

In Denmark, no real prevalence studies have been carried out among the general population. But the number of persons in whom hepatitis C is detected via the blood donor screening scheme is decreasing and has remained below 10 annual cases for the past 10 years. Seemingly, then, there is no basis for a recommendation of screening of specific generations of Danes.

One child was infected at birth in Denmark in 2015. This is a known, but rare mode of infection. Hepatitis C does not form part of the screening of pregnant women, partly owing to the very limited risk of transferring the virus to the child, partly because – in contrast to hepatitis B – no preventive measure exists that may be offered to the pregnant woman/the neonate.

Women who are known to have hepatitis C are not advised to avoid pregnancy or breast-feeding.

As previously, the groups in need of hepatitis C screening include current and former IV drug users and HIV-positive patients, particularly men who have sex with men.
(N. Mellerup, S. Cowan, Department of Infectious Disease Epidemiology)

As from 1 April 2016, the second MMR vaccine for 12-year-olds will, in principle, no longer form part of the childhood vaccination programme.

Nevertheless, the MMR vaccine may still be given free of charge to all persons below 18 years of age who have not received one or both MMR vaccines, and to adult women who are not immune to rubella. Unvaccinated children above four years of age may receive two MMR vaccinations at a minimum one-month interval.

It is important that the GP remembers to offer the MMR 2 vaccination in connection with the 4-year childhood examination. One of the reasons why the vaccination time was shifted from 12 years to 4 years of age was an ambition to increase the coverage of the MMR vaccination programme so that it would reach the threshold level needed to eliminate the conditions, primarily measles and rubella.

The prerequisite to eradicating measles is a vaccination coverage of at least 95% for the two MMR vaccinations. If the MMR 2 is not given at four years of age, it should be given as soon as possible, e.g. concurrently with the dTap-IPV booster at five years of age or prior to foreign travel to areas where measles occurs endemically/epidemically.

The vaccination coverage was lower for those birth years (except 2008) where the entire birth cohort has now beeing offered the MMR 2 vaccination at four years of age (birth cohorts 2005-2010) than the MMR coverage at 12 years of age for the five birth cohorts (1997-2001) which received vaccination in the same period, see Overvågning i Tal, Grafer og Kort “Monitoring in numbers, figures and maps” at the SSI website (In Danish).

Children born in 1998 or later may still be vaccinated free of charge until they turn 18 years old. There is, in principle, no upper age limit for MMR vaccination.
(P.H. Andersen, Department of Infectious Disease Epidemiology)