Results from the EPI-NEWS user survey

Results from the EPI-NEWS user survey

In the autumn of 2014, Department of Infectious Disease Epidemiology, Statens Serum Institut, conducted a user survey among EPI-NEWS subscribers, EPI-NYT 38/14 (Danish version only). The Danish newsletter email sent out on 18 September 2014 contained a link allowing readers to access an electronic questionnaire with a series of questions about EPI-NEWS. Furthermore, some of the final questions in the questionnaire addressed the advisory service provided by Department of Infectious Disease Epidemiology. These final questions were to be answered by healthcare workers only.

The deadline for submission of responses was Friday 26 September 2014, and the survey includes 766 responses corresponding to approx. 9% of the 8,651 EPI-NEWS email subscribers at the time the survey was conducted. The results of the survey are hereby provided to the English reading subscribers of EPI-NEWS.

Who answered the user survey?

Among the 766 respondents, 89% stated that they were healthcare workers, including 43% from general practice (33% were GPs), and 25% were employed at a hospital (13% were medical specialists), whereas slightly more than 2% worked in medical specialist practices.

A total of 8% of respondents were junior doctors and 17% nurses. One percent of the respondents stated that they were journalists or had another media-related background. Among the 10% who stated other occupations, a wide range of backgrounds was recorded, including students, teachers, veterinarians, privately employed persons, "normal" citizens etc., but also retired physicians.

Nearly 40% of the respondents worked in the Capital Region of Denmark, 19% in Region of Southern Denmark, 17% in the Central Denmark Region, 13% in Region Zealand and 7% in the North Denmark Region. Nearly 5% stated that they were employed elsewhere, primarily in the remaining Scandinavian countries, the Faroe Islands or Greenland. 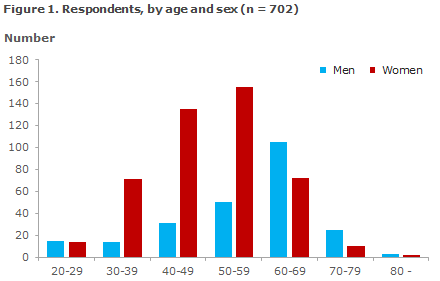 How frequently did respondents read EPI-NEWS and how long time did they spend reading it?

How satisfied were the respondents with the fact the newsletter is a weekly publication?

A total of 88% stated that they were either highly satisfied or satisfied with the current publication frequency. Approx. 10% were neither satisfied nor dissatisfied, whereas nearly 1% were dissatisfied. All (5) respondents in the latter group would have preferred EPI-NEWS to be issued more than once a week.


What did the respondents think of the current length of EPI-NEWS?


Which part of EPI-NEWS is most frequently read and how easy is it to understand its content?

Nearly 80% stated that their decision to either read or not read EPI-NEWS depended on the specific topic addressed in the issue in question. Additionally, 24% read the full newsletter, 20% only read the commentary, whereas about 10% only read tables and figures (respondents were allowed to tick more than one response category and therefore the sum of the responses exceeds 100%).
In relation to the core parameter of readability, slightly more than 81% of respondents stated that the content is either very easy to read (32%) or easy to read (49%). Approx. 18% found that the newsletter was neither easy nor hard to read, whereas 1% found that the newsletter was hard to read.

A total of 88% were either highly satisfied (47%) or satisfied (41%) with the current format of EPI-NEWS, whereas 8% were indifferent. Only 3% stated that they were dissatisfied or very dissatisfied with the format. Among these (22), the majority would have preferred a list of short "teasers" and links to content on the SSI website, whereas some respondents preferred the previously used print-friendly 1-page format, and others would have preferred that a PDF had been enclosed with the email.


Do readers keep a copy of EPI-NEWS?

Nearly 60% of the respondents do not keep a copy of EPI-NEWS, almost 1/3 keep an electronic copy and 7% print out a paper copy.

Where do readers find information/knowledge previously published in EPI-NEWS?

How useful is the EPI-NEWS search facility?

A total of 87% of the respondents who know/have used the search facility find that it is useful or very useful, whereas 8% are indifferent and 3% find that the facility is not very useful. In the latter group the main causes stated were that respondents have a hard time finding the most recent and relevant search results, and that it is hard to get an overview when searching.


Are readers satisfied with the professional content of EPI-NEWS?


May EPI-NEWS be used to solve professional issues concerning vaccination and infectious diseases?

On this core parameter, 89% answered that they find that EPI-NEWS is either very useful (44%) or useful (45%), whereas 5% were indifferent and slightly more than 4% did not find that the question was relevant to them.


How useful are the various subject areas that EPI-NEWS addresses?

The question enquired about five different subject areas, which were assessed on a scale from 1 to 5 where 1 is the lowest usefulness and 5 the highest usefulness. The 698 respondents who answered this question assessed the subject fields as shown in Figure 2 (mean 4.1). 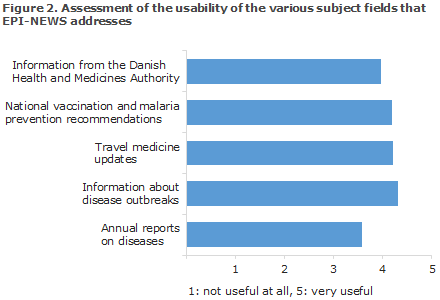 How is the news value of EPI-NEWS assessed?

The 89% (n = 691) of respondents who stated that they were healthcare workers were asked a number of questions concerning the advisory service provided by Department of Infectious Disease Epidemiology. More than half of the (n = 683) respondents who answered the question about how frequently they had contacted the department's advisory phone service within the past year answered that they had not made use of this service. A total of 30% had called up to 3 times, 10% had called 3-6 times, nearly 3% had called 6-12 times and slightly more than 1% had called more than once a month.


Are the advice provided over the phone useful? - And is it possible to get an answer or is the line occupied?

To the question addressing the respondents' satisfaction with the time it takes to reach the advisory service, 72% were either highly satisfied (24%) or satisfied (48%), whereas 17% were neither satisfied nor dissatisfied, and 6% were dissatisfied. Nearly 4% answered "Do not know".

A total of 47% stated that they were either highly satisfied or satisfied with the phone-based advisory service's current opening hours , whereas 43% were indifferent, 9% were dissatisfied and ½% were very dissatisfied. The questionnaire gave respondents the opportunity to provide their reasons for any lacking satisfaction, and the primary causes stated were too short opening hours and too much waiting time.

Does healthcare workers know that they can get written advice by mail at epiinfo@ssi.dk?

It is uncertain if the user survey is representative as less than 10% of the Danish reading subscribers answered the questionnaire.

Furthermore, it is possible that responses were geographically skewed as nearly 40% of respondents worked in the Capital Region of Denmark. We have not previously recorded our subscribers' place of work and are therefore unable to establish if this share of respondents is in line with the share of subscribers from the Capital Region of Denmark - or the remaining four Danish regions.
Traditionally, general practice has been the primary target group of EPI-NEWS, and it is therefore somewhat surprising that GPs only comprise 1/3 of the respondents.

A predominance of women and an unexpectedly high mean age was observed among respondents, but it remains unknown if the sex and age distribution reflects the composition among our subscribers, or if women are more willing to answer questionnaires and if elderly (possibly retired) subscribers have more time to respond.

Overall, the results of the user survey are assessed as being very satisfactory. On the 4 core parameters of readability, professional content, usability and news value, satisfaction scores are very high. The overwhelming majority were also satisfied with the fact that EPI-NEWS is published weekly and in the current format, whereas 15% found that the newsletter mail has become too long. The group of editors have made a note of this.

Unsurprisingly, many subscribers decide if they will read an issue of EPI-NEWS or not on the basis of the specific topic addressed in the issue. We have attempted to address this by introducing topic headlines in the beginning of the newsletter, allowing the reader to quickly decide if the content of the mail in question is relevant.

With regard to the EPI-NEWS search facility on the SSI's website, a large share (36%) had never used this facility. Among those who had, some stated that they found it was difficult to retrieve relevant information. The group of editors would like to take this opportunity to draw attention to the search tips, e.g. on truncated searches and phrase searches, provided on the right hand side of the page after you have performed a search (The search tips are only available on the Danish site). Furthermore, the search results may be prioritised according to "best match first" or "newest first".

In relation to subject areas, the information provided on disease outbreaks and travel medicine updates/ vaccination recommendations were perceived as being the more useful subjects, whereas the disease-specific annual reports were seen as the least useful subject area. The group of editors have also assessed that some of the disease-specific annual reports do not necessarily need to be published every year, but may instead be published thematically and on an "as needed" basis, e.g. in connection with outbreaks.

Furthermore, many details and updated data on the occurrence of notifiable diseases are available at the SSI website under "Tal og grafer" (In Danish language). We therefore expect to bring fewer annual reports in EPI-NEWS in the future. We would like to take this opportunity to express our gratitude for the many good suggestions for EPI-NEWS topics received. We will try to cover these in the future.

Responses from healthcare workers concerning the advisory service demonstrates that generally there is considerable satisfaction with the quality of the advice provided, but also that availability is/has been a challenge. A technical inexpediency related to the queuing function should now have been resolved through the introduction of a new IP-based phone system. Furthermore, many respondents find that the current opening hours are too limited. On the other hand, the survey revealed a considerable lack of awareness of the opportunity to receive advice via email at epiinfo@ssi.dk.

Healthcare workers who have questions that do not require an immediate answer are encouraged to make use of this service. The use of email has increased since this autumn, possibly owed to increased awareness of the email service achieved through the user survey.
(P.H. Andersen, Editor of EPI-NEWS, Department of infectious Disease Epidemiology)