In Denmark like in most of Europe, the 2014/15 influenza season was dominated by an influenza A H3N2 virus; and due to changes in this virus, the seasonal influenza vaccine only provided limited protection against this virus. Nevertheless, the influenza activity in Denmark did not increase until towards the end of February, and therefore the season was relatively short and its consequences less comprehensive than those observed in other European countries.

Based on the share of persons who contacted their GP and the emergency call physicians with influenza-like illness, the influenza activity in the population was relatively low. In contrast hereto, a relatively large number of influenza patients received intensive care at a hospital, and a moderate excess mortality was recorded among the elderly.

From Week 40 in 2014 to Week 20 in 2015, the occurrence of influenza-like illness (ILI) was reported to the sentinel surveillance by an average of 132 GPs weekly. The ILI occurrence was also followed daily via the nationwide surveillance performed by emergency call service physicians and also via the 1813 Helpline in the Capital Region of Denmark.

ILI in the population was monitored through Influmeter, a web-based monitoring system which allows anyone residing in Denmark to sign up and start reporting influenza-like and other symptoms for themselves and other members of their household. This initiative was launched during the previous influenza season. At the end of the current season, a total of 1,720 persons had signed up for Influmeter.

The occurrence of laboratory-confirmed influenza was monitored via the Danish Microbiology Database (MiBa), and occurrence and any changes in the influenza virus were monitored via specimens submitted to the National Danish WHO Influenza Centre at the SSI.

Since 2009, the monitoring of serious influenza has been based on actively reported information from intensive care units on admitted patients diagnosed with influenza. In the 2014/15 season, a new, automated system was established, which was based on weekly data capture from existing registers. Patients diagnosed with influenza are identified in the MiBa, and information on admission to hospital, intensive care therapy and underlying conditions is collected from the National Patient Register. Vaccination information is collected from the Danish Vaccination Register and information on fatalities from the Danish Civil Registration Register (the CPR Register).

Mortality in the population in general was assessed through daily collection of information on deaths from the CPR Register.

The occurrence of ILI was remarkably low during the majority of the season, and the share who contacted a physician due to ILI was higher than in the non-influenza season only in weeks 7-14; but, still, it remained at a relatively low level, Figures 1 and 2. 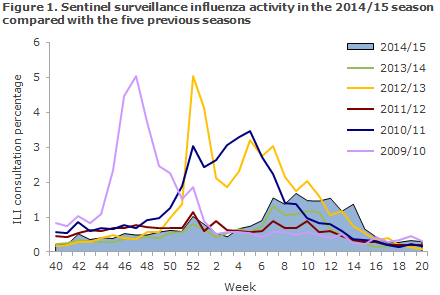 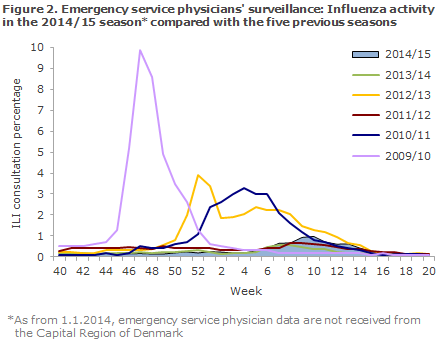 Among Influmeter participants, the same seasonal ILI variation was seen in 2014/15 as had been recorded in 2013/14 with the highest ILI activity being reported in the periods of November-December and February-March. From October 2014 to May 2015, an average of 1,000 volunteer citizens had answered the weekly questionnaires via Influmeter. The share of citizens who reported ILI to Influmeter in the 2014-2015 season peaked in weeks 46 and 10-13 when around 3% and 4%, respectively, reported ILI, Figure 3. A total of 435 of the 1,720 participants reported ILI at least once in the course of the season (25%). 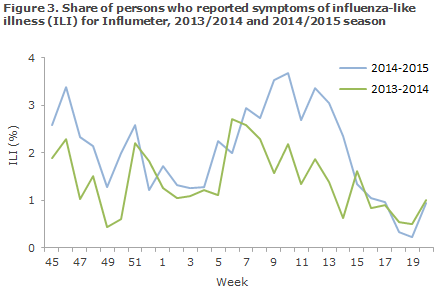 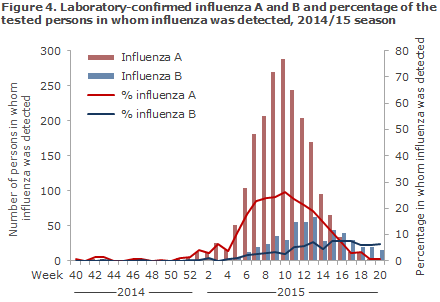 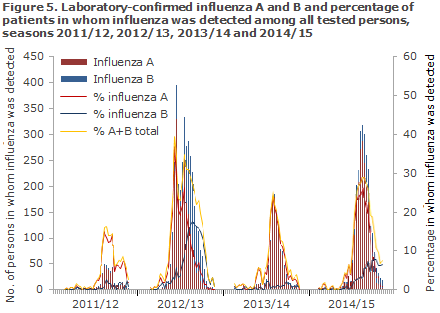 In the 2014/15 season, the National Danish WHO Influenza Centre at the SSI tested a total of 1,691 specimens, including 277 specimens submitted by the sentinel physicians, 291 diagnostic specimens submitted by GPs and other laboratories, and 1,123 surveillance specimens submitted by departments of clinical microbiology. Among these, 1,269 patients tested positive for influenza virus type A or B. The distribution of patients by identified virus strains is presented in Table 1. A total of 50% of the influenza-positive patients were H3N2, 32% were H1N1pdm09 and 17% influenza B.

In the beginning of the season, the predominant subtype was H3N2. Further characterisation demonstrated that 81% of the cases belonged to the two antigen variants 3C.2a A/Hong Kong/5738/2014-like and 3C.3a A/Switzerland/9715293/2014-like, which were also observed in the US and in other European countries. Clade 3C.2a comprised 68%. This was the so-called drifted virus that had changed relative to the H3N2 virus strain contained in the seasonal influenza vaccine.

The Department of Virology, SSI, performed PCR-based testing of 538 airway specimens for more than 20 known airway viruses of which 153 (15%) tested positive to influenza, and 195 (36%) tested positive to other airway viruses. Rhinovirus (n = 54) was the most frequently detected virus, second only to influenza, followed by RSV (n = 52), Figure 6. The beginning of the season was characterised by a higher occurrence of enterovirus than is usually seen. Compared with the previous season, when enterovirus was not detected in the sentinel surveillance programme, enterovirus was detected in a total of 25% of the sentinel specimens from weeks 45-50. 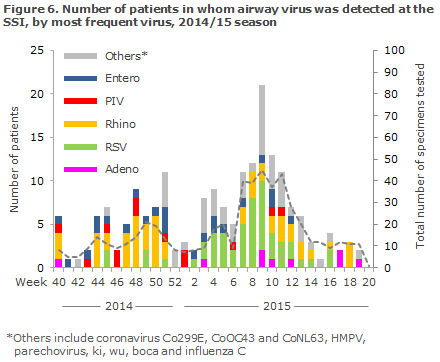 The National Danish WHO Influenza Centre at the SSI offers testing of influenza specimens for antiviral resistance. Furthermore, the Centre is responsible for an antiviral project performed in cooperation with departments of clinical microbiology that focuses specifically on the development of resistance in patients receiving treatment with antivirals at Danish hospitals. A total of 54 specimens were ordered for resistance testing, and resistance to either osaltamivir (Tamiflu®) or zanamivir (Relenza) was established in 11 specimens from seven patients who had either influenza A H3N2- or an H1N1pdm09 infection. All patients in whom resistant virus was established were receiving antiviral treatment. 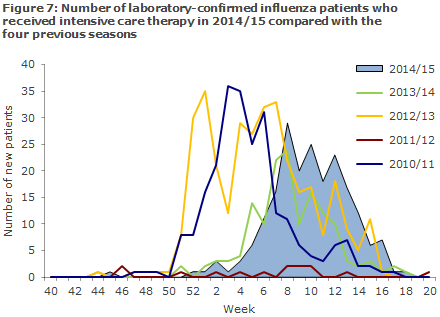 Seasonal influenza vaccination was offered free of charge to specific groups from 1 October to 31 December 2014 and also to pregnant women in their second and third trimesters and to persons with immunodeficiency and their contacts until 01 March 2015, EPI-NEWS 39/14.

According to data from the Danish Ministry of Health, a total of 593,337 persons accepted the offer, including 106,038 chronically ill patients, 22,394 early retirement pensioners, 5,423 pregnant women, 2,113 household contacts to immunosuppressed persons and 457,338 persons aged 65 years or above. Slightly fever vaccinations were given to all groups than last year, and the vaccination coverage among elderly persons aged 65 years and above also decreased from 47% to 45%. The number of electronically settled influenza vaccinations given to risk group persons and the vaccination coverage among elderly persons above the age of 65 years distributed by area and municipality are available at www.ssi.dk/data.

As appears from the virological data in particular and from data from intensive care units and the mortality trend, the increase in influenza activity related to the 2014/2015 season was not observed until well into 2015. The activity level in the population remained relatively low, estimated by the share of citizens who reported ILI, and by the share of patients who contacted their GP, the emergency call services or the Helpline for ILI.

The influenza activity only exceeded the levels observed in non-influenza periods marginally and only for 7 weeks. Nevertheless, the number of influenza patients receiving intensive care therapy due to a serious influenza course was relatively high, and - as mentioned - excess mortality was recorded among the elderly.

This was the first year in which monitoring of patients receiving intensive therapy was based on data capture from registers rather than on active reporting from the intensive care departments. This system has proven to be highly sensitive. Data can be updated continually as needed, and neither hospitals nor regional authorities need to allocate any resources to monitoring. Furthermore, the workload does not depend on the number of patients, and the efforts made can be brought to benefit for future surveillance of influenza and other pathogens.

Influenza vaccination coverage was lower in this season than in the previous season, but it was in line with the level observed in previous years. One cause explaining this may be that the Danish Health And Medicines Authority did not run an influenza campaign in 2014 or that the 2012/13 season was particularly intensive, which may have caused the vaccination coverage to rise slightly the following season. Even though the effectiveness against influenza A H3N2 was poor this year, the vaccine presumably had good effect on influenza A H1N1pdm09 and influenza B, which together comprised nearly half of the tested virus strains this year.
(The SSI Influenza Team: T.G. Krause, L.K. Knudsen, H-D. Emborg, A. Wendland, J. Nielsen, L. Espenhain, M. Voldstedlund, C. Kjelsø, M. Galle, H. Bang, Department of Infectious Disease Epidemiology, R. Trebbien, T.K. Fischer, Virology Surveillance and Research, Statens Serum Institut)