The number of new cases of Methicillin-resistant Staphylococcus aureus (MRSA) continued to increase in 2014. A total of 2,965 cases were recorded compared with 2,092 in 2013, corresponding to a 42% increase, Figure 1. 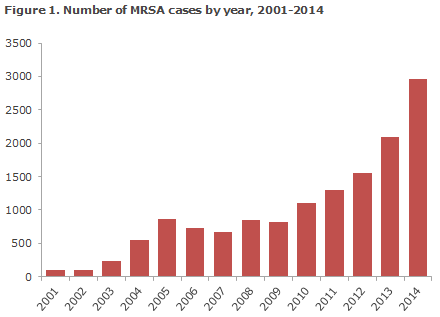 The presumed mode of infection was classified on the basis of epidemiological and microbiological information, Table 1. The majority of the MRSA cases were acquired in Denmark, whereas infection abroad was stated in 411 cases (14%) compared with 358 in 2013 (17%).

Community-acquired MRSA, i.e. in persons with no known contact to pigs, hospitals or nursing homes, comprised 946 cases in 2014, compared with 821 cases in 2013. In 478 of these cases (51%), there was known exposure to a person with MRSA, most frequently a member of the household (92%). 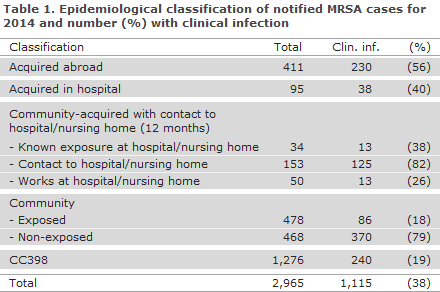 In 1,115 cases (38%), clinical infection was the reason why sampling was performed. In 56 cases, MRSA was isolated from blood, corresponding to 2.9% of all S. aureus bacteraemia cases, which is a substantial increase with respect to recent years, but the figure remains low compared with other European countries. As previously, few hospital acquired infections were seen (49 in all; 38 patients and 11 hospital staff members), whereas the number of community-acquired infections increased slightly compared with last year (401 in 2013, 456 in 2014), Figure 2. 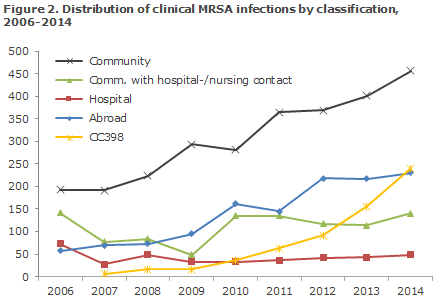 A total of 21 outbreaks counting 107 MRSA cases were identified. The two largest outbreaks were seen in the Capital Region of Denmark and each outbreak included 15 cases. Three outbreaks started in neonatal departments.

The 10 most frequently observed spa types comprised 67% of the isolates. Among the types, t034 (n = 990; CC398) and t002 (n = 181; CC5) were the most frequently observed. Resistance was presented separately for CC398 and the remaining MRSA, because CC398 is always tetracycline resistant and frequently (> 90%) clindamycin resistant, whereas the occurrence of resistance to fusidic acid and kanamycin in CC398 is generally lower than the occurrence of resistance of the remaining clonal complexes (Table 2).

2014 saw a total of 8 cases of MRSA CC398 bacteraemia, including 2 with a fatal outcome within 30 days. In both cases, there was no known contact to pigs.

In 2014, a total of 53 (1.8%) cases of the mecC MRSA variant were detected, compared with 41 cases (2.0%) in 2013. This type was initially described in 2010, EPI-NEWS 47/12. The source and mode of infection were unknown in the majority of the cases. Previously, this type has been associated with probable infection from cattle and sheep.

The number of new MRSA cases continued to increase and was higher in 2014 than in any other year since the mid-1970s. Despite this trend, the share of hospital-acquired cases remains low which indicates that the Danish Health and Medicines Authority's 2006 guideline, which was revised in 2012, is still effective.

This is supported by the fact that the majority of the outbreaks only comprised a limited number of persons. In connection with outbreaks in neonatal departments, it is not always known how the infection entered the department.

In such outbreaks, the majority of the affected persons are children and their families are healthy carriers, even though they have had the bacterium for a prolonged period of time. When an outbreak is established in a neonatal department, this triggers considerable screening activity and subsequent follow-up measures.

This means that persons working with pigs and their households are tested for MRSA when admitted to hospital and in connection with any infections that may have been caused by staphylococci. For this reason alone, a greater number of MRSA CC398 cases is to be expected.

In 2014, a group of experts was established under the auspices of the Danish Veterinary and Food Administration to provide a risk assessment and proposals for measures to counter livestock MRSA. The expert group's work was published on 22 December 2014, and in May 2015 an agreement was reached in the Danish Parliament, Folketinget, which, among others, means that the antibiotics consumption in the agricultural sector shall be reduced by 15% in the 2015-2018 period compared with the 2014 level, and that the hygiene measures in place when leaving a piggery shall be tightened.

In the autumn of 2014, the Danish Ministry of Food, Agriculture and Fisheries approved funding for a 3-year research project the objective of which is to provide an overall assessment of the importance of MRSA CC398 in livestock and in humans. The project comprises a series of microbiological and epidemiological sub-projects and is headed by DTU-VET in collaboration with Statens Serum Institut. The project was established in the spring of 2015 and is expected to provide a strong basis for the authorities' future efforts to counter MRSA CC398.
(A. Petersen, A.R. Larsen, R.L. Skov, Microbiology and Infection Control, A. Koch; L.K. Knudsen, Department of Infectious Disease Epidemiology)